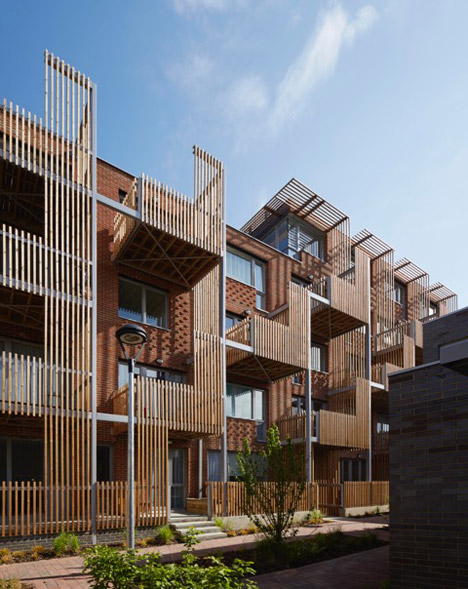 The Underwood Road project was designed by Brady Mallalieu Architects for developers Peabody and contains 33 properties of varying scales that are intended as social and shared-ownership housing.

An existing building that previously occupied the entire footprint of the site was removed to make space for the scheme.

The new structure is a storey higher, yet aims to improve the amount of daylight and views reaching neighbouring houses through its separation into two distinct units.

A building that reaches five stories faces the road and contains a variety of flats and maisonettes, while a row of three courtyard houses at the rear reduces the project’s overall massing and introduces a more typical residential scale.

To lessen the visual impact of the five-storey block facing the street, the building’s frontage was broken down into volumes that are differentiated by their height, depth, and the colour and pattern of their brick surfaces.

“Three different brick panel types have been created using projecting or inset brickwork patterns based on a different but related grid for each volume, which also organises the window openings, giving each volume its own identity,” said the architects in a statement.

Vertical volumes extending out from the facade house the staircases and feature concrete panels with recessed writing that identifies the different addresses in the scheme.

A section of wall that connects the two lift towers contains a series of entrances, light courts and lobbies serving the apartments behind. A band of lettering incorporated into the brick references the site’s history as the location of a former Jewish maternity hospital.

Four maisonettes accessible directly from the street occupy the ground floor and basement level. These properties feature kitchen and dining spaces that look onto the street and living areas at the rear that open onto terraces. Voids along the street frontage allow light to filter down to the bedrooms accommodated below ground.

The staircase volumes, which incorporate windows looking onto the street, connect with two communal lobbies providing access to the apartments on the upper floors. Most of the apartments have windows at the front and rear, except for a few south-facing one-bedroom flats.

Living areas are predominantly arranged along the south-facing rear facade and open onto steel-framed balconies lined with vertical wooden screens, which “create a lightweight counterpoint to the mass of the brickwork volumes,” according to the architects.

The balconies are mostly arranged in a staggered formation to give each an improved sense of height and better views to one side, while allowing more daylight to reach the flats below.

Sections of the balconies extend upwards to create a greater sense of privacy and partly shield the interiors from view. Where they reach the roof, the vertical battens meet horizontal sections that form bris soleil solar shades.

At the rear of the plot, the three L-shaped courtyard houses are separated from the apartment building by a walled garden – incorporating two play areas for children of different ages.

Each of the houses features a two-storey volume positioned along its north-south axis and a single-storey volume running east to west, which ensures the optimum amount of daylight is able to reach the flats behind.

A variety of new housing developments have popped up in east London including a collection of brick bungalows and a terrace clad with timber shingles, while the 1960s Brutalist Robin Hood Gardens scheme looks set for demolition after its bid for listed status failed.

Photography is by Dennis Gilbert, unless specified otherwise.