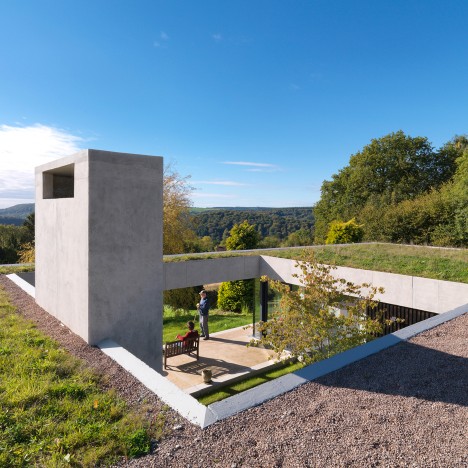 The 20 houses vying for this year’s RIBA House of the Year award have been announced, including a forest home for a pair of artists, a London residence covered in mirrors and a cluster of cabins in Dungeness (+ slideshow).

A renovated mid-century house in Wiltshire, a house-cum-gallery in Brighton and a Japanese-inspired house extension also feature on the longlist for the RIBA‘s annual award, which recognises the best UK house designs of the past 12 months.

Other additions include a house with a rooftop garden pyramid, a fort-like residence in Jersey, a stone and zinc country house in Cumbria, a house that hangs over a cliff in Cornwall and a small faceted extension to a Yorkshire home.

Formerly known as the Manser Medal, the prize was renamed RIBA House of the Year in 2015.

It now forms the basis for a spinoff of the television series Grand Designs, presented by Kevin McCloud, with the shortlist and winner announced over four episodes.

Last year’s winner was a house clad in pieces of flint, designed by Skene Catling de la Pena for one of the world’s richest families.

Other past winners include an extended Welsh stone barn, a south London house with translucent glass walls and an extension to a mill-keeper’s house on the Norfolk Broads.

Scroll down for the full list of projects vying for the RIBA House of the Year 2016 award: