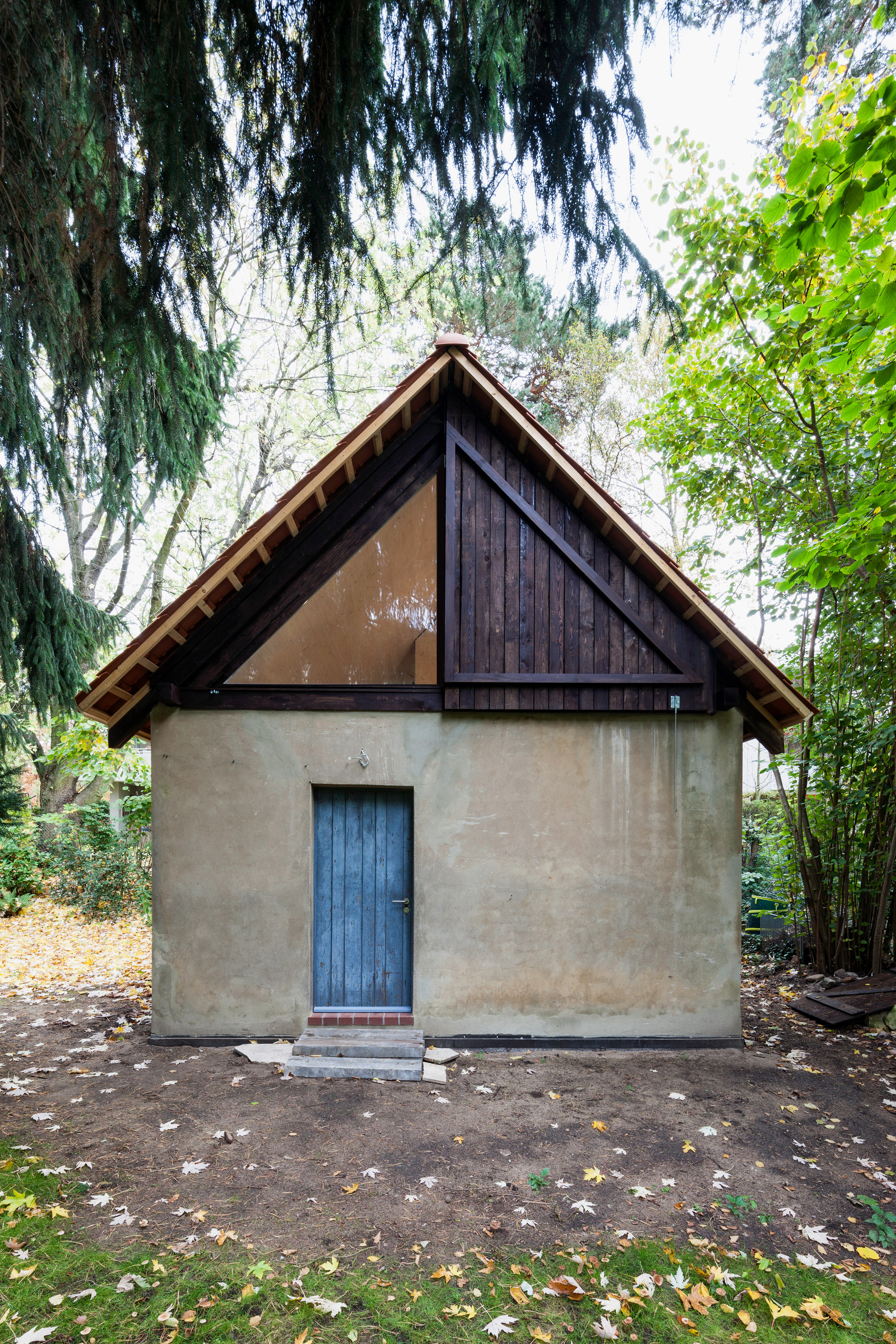 Berlin-based practice Büros für Konstruktivismus has transformed a former chicken house in the back garden of a 1930s home into a pine-lined artist’s studio.

The project is named Hühnerhaus, the German word for henhouse. The coop was originally constructed just after second world war in the grounds of a Berlin villa, but after its renovation the owner now uses the building as an artist’s studio.

Architects Sandra Bartoli and Silvan Linden chose to maintain the rustic charm of the dilapidated exterior.

“There are two reasons for this,” Bartoli and Linden told Dezeen.

“Part of the project was to legalise the chicken house’s previously unclear status. For this reason the exterior of the house had to remain inconspicuous,” they added.

“The second reason is that we liked the chicken house’s slightly ruinous appearance, surrounded by lush plants.”

From the outside, the gabled tiled roof and untreated exterior lends a storybook appearance to the building, but inside it has been completely transformed.

There is little to suggest the former feathered occupants were ever there. The interior has been stripped out and clad in light pine.

Even the original chimney and steel beams have been covered in matching wood to create a unified visual effect.

“The intersection between the existing beam and the chimney, both cladded in wood, resulted in a somehow bold cross shape,” said the architects. This serendipitous geometry is their favourite part of the project.

They also added a balcony to the single, open space, with storage units built into the underside of the staircase.

Two large south facing windows with low sills were included in the original design for the benefit of the chickens who roosted there. Now they allow natural light to fill the studio space, reflecting off the light-toned wood.

Hinged panels under the eaves to the east and west can be pulled back to reveal triangle-shaped windows.

Previously the coop featured an attic, accessible only via an outdoor ladder. Pigeons sheltered in here, and their manure was collected to be used as fertiliser.

The pigeons are also long gone, but the door has been converted into a window and the original wooden boards recut into a matching shutter.

Photography is by Martin Eberle.

The post Büros für Konstruktivismus turns a chicken coop in Berlin into an artist’s studio appeared first on Dezeen.