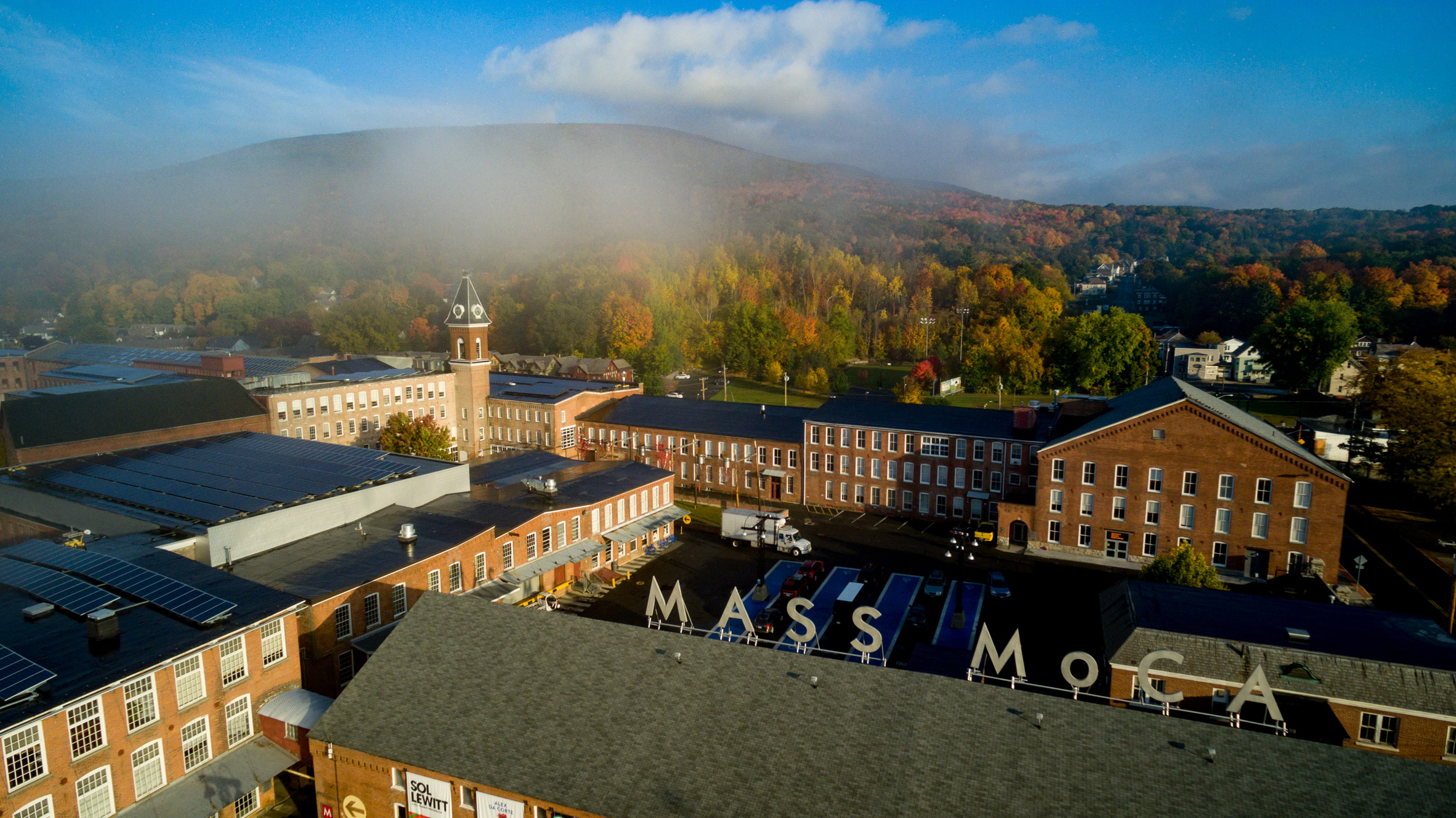 American architecture firm Bruner/Cott has completed the latest stage in transforming a former textile factory into the Massachusetts Museum of Contemporary Art.

The museum sits at the heart of North Adams, an industrial town in the Berkshires area of Massachusetts.

The area is an unlikely arts hub, but neighbouring Williamstown is also home to the historic Williams College for arts, and the Clark Art Institute – which was extended by Tadao Ando and renovated by Annabelle Selldorf before reopening in 2014.

The Massachusetts Museum of Contemporary Art (MASS MoCA) occupies a vast complex that was first a textile manufacturing facility, and then a premises for producing electrical goods.

Its latest expansion into the part of the site known as Building 6 forms the third phase of its transformation, which has almost doubled the amount of exhibition space to 250,000 square feet (23,200 square metres) and makes it one of the largest museums of contemporary art in the US.

Set to open in May 2017, it also creates a home for long-term installations by American artists including James Turrell, Louise Bourgeois and Laurie Anderson.

Cambridge-based Bruner/Cott & Associates has been responsible for all stages of the site’s conversion, which began in 1996.

The firm’s aim throughout has been to maintain the industrial vestiges of the brick buildings and keep the “rugged raw vernacular typical of American industrial spaces” as much as possible.

Building 6 is located at the western end of MASS MoCA’s 16-acre (6.5-hectare) site, on a tip of land where two branches of the Hoosic River meet. This dictated the building’s form, which converges almost to a point.

By opening up this block and joining two dead-ends, the layout will allow visitors to loop around the full museum on the middle level rather than journeying back on themselves.

“This was the level that materials and goods were moved around the factory,” MASS MoCA director Joseph Thompson told Dezeen during a tour of the new spaces. “It’s great to be able to reinstate a flow through the site once again.”

A slice down the centre of Building 6 – originally designed to allow more light into the deep floor plates – has been covered by a glazed top and turned into an atrium-like circulation space.

Steel staircases here connect the three levels vertically, while metal walkways bridge across to link the halves of the upper storey.

Different coloured paintwork on the walls shows traces of the rooms that previously filled the gap.

Across the large galleries, rhythm is created by the columns spaced every two metres and windows that run along the external walls.

The building culminates at a double-height space facing a huge window – bringing in even more light and providing sunset views.

Semi-enclosed spaces in the centre of each floor allow for more controlled lighting, necessary to display the projection works of artists like Jenny Holzer.

One of the intentions for Building 6 is to be able to house works that other parts of the museum cannot.

For example, the many tonnes of marble in Bourgeois’ sculptures are too heavy for typical floors, so the renovation encompassed reinforcing the floors with steel and recovering the added structure with original floorboards.

“Lots of effort goes into making it look like nothing is there at all,” said Thompson.

Another benefit of the expansion is the opportunity for the architects to work with the curators and artists to install site-specific works.

Turrell is creating nine of his signature pieces that play on the perception of light and space, which vary in scale and are ordered in sequence. The largest forms part of his Ganzfeld series, designed to eliminate the viewer’s depth perception.

On the upper level, Anderson has taken residency in a set of spaces that will allow visitors to interact with her creative process.

Meanwhile on the ground floor, a variety of back-of-house spaces will help the museum better stage the numerous concerts, music festivals and performing arts events in its programme.

“If most museums are boxes for static display, MASS MoCA has always aspired to be more like a turntable,” said Thompson.

“This expansion includes landmark installations of stunning breadth, scale, and duration, but also provides flexible, changing spaces for music, art fabrication, studio space, and amenities for both the artists who work here and the patrons who enjoy their work.”

Building 6 will open to the public on Memorial Day weekend, beginning 27 May 2017. Visitors will also be able to view the expansive exhibition of brightly coloured wall drawings by Sol Lewitt, in the dedicated space in Building 7 completed by Bruner/Cott in 2008.

Art museums across the US are also adding square footage to be able to show more of their growing collections. The San Francisco Museum of Modern Art (SFMOMA) expansion by Snøhetta opened last year, while work continues on Diller Scofidio + Renfro’s overhaul of New York’s MoMA.