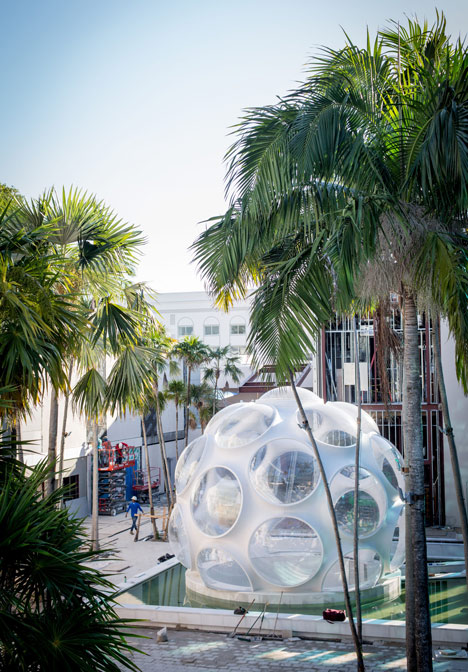 Design Miami 2014: a domed structure conceived by American Neo-Futuristic architect Buckminster Fuller as an “autonomous dwelling machine” has been installed in the Miami Design District.
Richard Buckminster Fuller designed and patented the Fly’s Eye Dome in 1965, which he saw as a prototype for low-cost portable housing of the future.
He had produced three of the prototype shelters by hand in different sizes before his death in 1983. Each comprises a series of transparent domed windows across a fibreglass partial sphere, creating a geodesic bubble.
The architect believed the building could house solar panels and water collection systems in some of its openings, offering an entirely self-sufficient residence.

One of the three domes, measuring just over seven metres in diameter, was acquired by Miami Design District creator Craig Robins in 2011. A year later, the Buckminster Fuller Institute commissioned a team of 3D-design specialists to recreate it using materials and technology not available to the architect during his lifetime.
DRDesign, Conform Labs and Goetz Composites created a 3D parametric model from the original parts, then used a five-axis CNC machine to produce a series of engineered components. The structure features a re-designed lower truncation, a new joining system that prevents water penetration and a passive ventilation system.
Sitting atop a pool of water, the new dome is installed in front of Sou Fujimoto’s almost-complete Palm Court shopping centre at 140 NE 39th Street. A spiral staircase inside the structure connects the courtyard with an underground car park directly beneath.