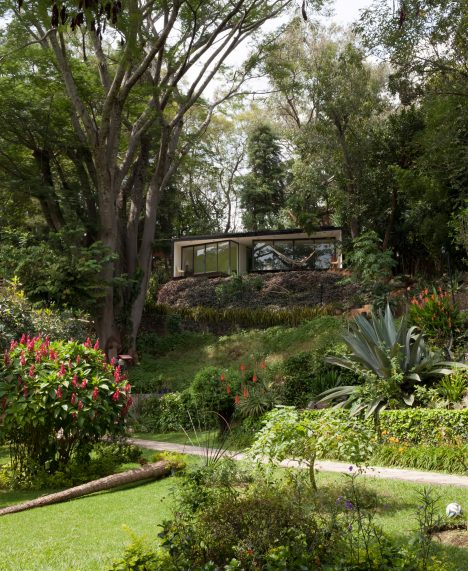 Black-painted concrete frames the two glazed boxes that make up this holiday home, designed by architects Cadaval & Solà-Morales for a growing tourist resort on the outskirts of Mexico City (+ slideshow).

The Tepoztlán Bungalow forms part of a wider transformation project that will see the area – located on the edge of the Tepoztlán mountain – transformed into a holiday complex.

Cadaval & Solà-Morales previously built a three-armed concrete guesthouse for the resort. The firm has now added a second structure to offer accommodation for a couple or a small family, and plans to add more residences in the near future.

Each property will feature a different design and layout, and will be available for travellers to rent for days, months or years.

Situated at the top of a slope, the Tepoztlán Bungalow features a glazed front that provides views over a valley.

Its concrete side walls are textured with the imprints of wooden formwork, and are painted black. These windowless walls maintain privacy in anticipation of future neighbours.

“A minimal private space for a couple or a small family is the programme. However views, light, nature and quietness are the reason of the project,” architect Kecho Quenke told Dezeen.

“It is a framed box with its sides shut to maintain privacy with the succeeding bungalows, but fully open to the frontal views,” Quenke explained.

The team wanted to separate the living and sleeping areas, so split the inner volume into two glass boxes that part from one another.

The master bedroom occupies one of the boxes, with a bathroom and twin bedroom behind, while the other features an open-plan kitchen, living and dining room. Doors from each space open to a slightly raised terraces with a large hammock hanging from the roof on one side.

The triangular gap between the two blocks is planted with vegetation.

“Being a temporary shelter, the project prioritises both the living area and the master bedroom,” said the architect. “Hence, the box brakes down in two at the front to make explicit the separation between those two main frontal spaces, allowing the vegetation to occupy the rift.”

“To strengthen the necessary relationship with nature, these two key spaces have large front terraces that extend their experience and approach to the edge of the natural platform on which the bungalow stands.”

White-painted walls and concrete flooring are used throughout the interior, offering contrast to the black exterior skin.

Cadaval & Solà-Morales was founded by Eduardo Cadaval and Clara Solà-Moralesin 2003, and is based in both Spain and Mexico. Other projects by the firm include a house comprised of ten cubes that point in different directions and a row of angular black penthouses.