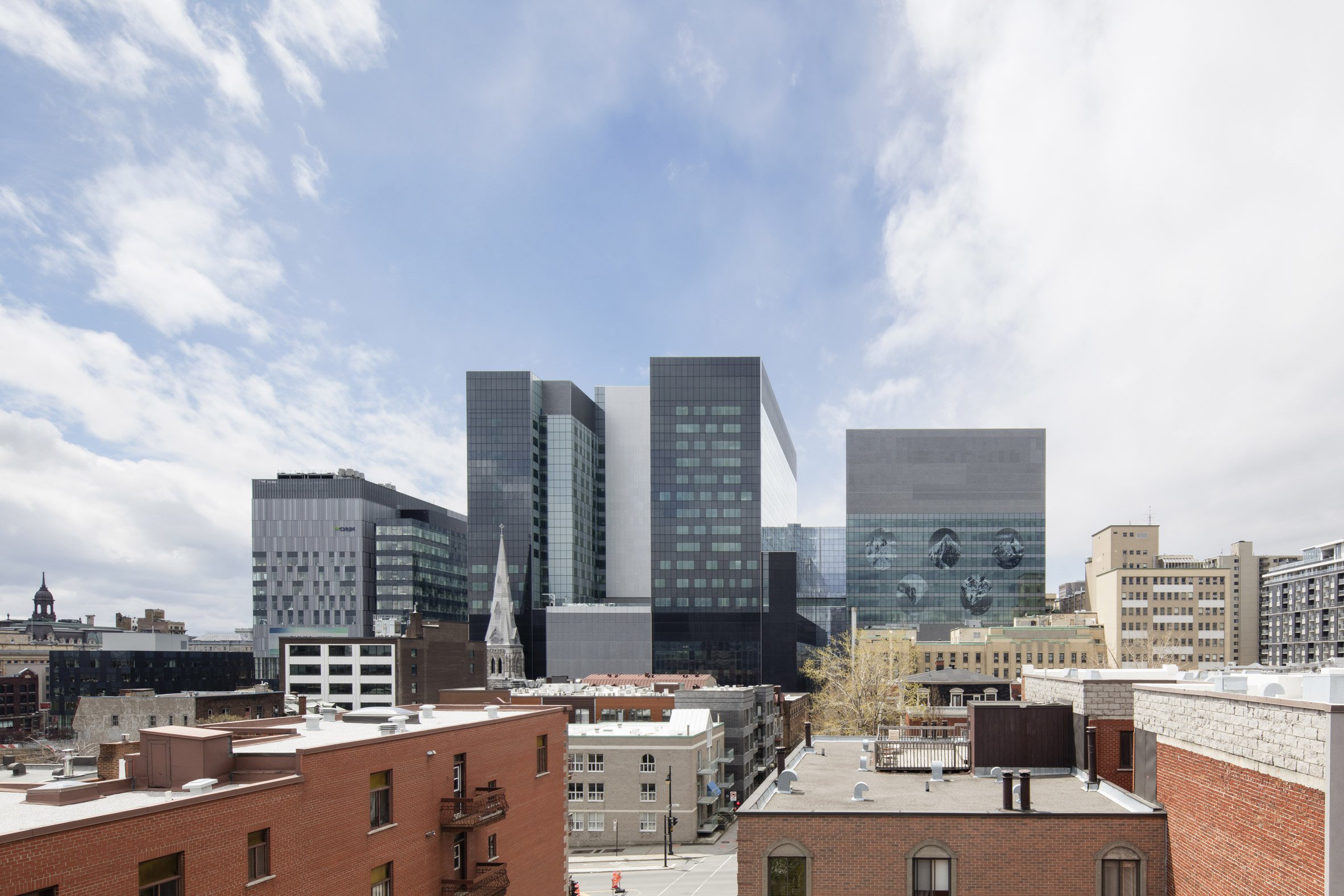 US-based Cannon Design and Canadian studio NEUF Architectes have completed the first phase of high-rise medical facility in Montreal, described as one of the largest healthcare projects in North America.

The Centre Hospitalier de l’Université de Montréal, or University of Montreal Health Centre – referred to as CHUM – covers two full city blocks in downtown Montreal and serves as the anchor in a new healthcare district, called Quartier de la Santé. From an urban standpoint, the complex is intended to help regenerate the “neglected east end” of the downtown district.

Encompassing three million square feet (278,709 square metres), the giant complex consists of interconnected bars clad in glass and metal panels. The bars vary in height and width, with the tallest one rising 22 stories. A courtyard sits as the centre of the complex, “providing areas for contemplation and acting as a counterpoint to the dense building massing”.

“The design team approached the project from all scales, including the large-scale urban element, the local neighbourhood context, and the fine grain of a human component, central to its vocation as a place of healing,” said the team. The project was designed by global firm Cannon Design, which has 15 offices, and Canadian firm NEUF Architectes, which has offices in Montreal and Ottawa.

Affiliated with the University of Montreal, the teaching hospital is remarkably large, even by healthcare project standards. “Begun in 2009, the CHUM teaching institution is the largest healthcare construction project in North America and the largest public-private partnership project in Canadian history,” the team said.

Creating a facility that was technologically advanced, easy to navigate, and comfortable for patients and staff were guiding concerns. Feature stairs and artwork add visual interest while also helping with way-finding.

Splashes of colour signify different departments and prevent spaces from feeling too sterile. Large windows bring in natural light and offer sweeping vistas of the urban landscape. “Each of the 722 rooms includes ample space for family involvement, and expansive windows offering some of the best views of the city,” the team said.

The facility has a number of distinctive features. The team partly preserved two historic structures that formerly occupied the site: a 19th-century church steeple and the facade of an old stone building. The two-storey facade sits behind a glass wall and is highly visible to passers-by. The steeple sits on a corner, just outside the hospital, and rises up from a small plaza.

Original artwork also plays a strong role in the design. The complex features 13 large-scale works of art, and ultimately will “house the highest concentration of public art in Montreal since Expo 67”, the team said, referring to the World Fair of 1967. The group also sought to make typical design elements more artful, such as a skybridge wrapped in perforated copper that is meant to act as a “floating lantern”.

“We have integrated the art directly into the architecture of the complex in ways that blur the lines between the two and provides a more human experience to the visitor and staff,” said Azad Chichmanian, a partner at NEUF Architectes.

“As the public begins to discover the architectural moments that have been created – from the inviting, light-filled public spaces to the state-of-the-art clinical facilities – we believe the building will succeed in completely redefining Montrealers’ image of what a hospital feels like,” he added.

“The CHUM has always been an extraordinary project from the bold vision that set it in motion nearly a decade ago to the beautiful building it has now become,” said Jose Silva, a principal for Cannon Design.

Other medical facilities in North America include a paediatric centre in Arkansas by Marlon Blackwell Architects, which features a bright red facade, and a circular cancer treatment centre in LA designed by Yazadani Studio, which is an offshoot of Cannon Design.