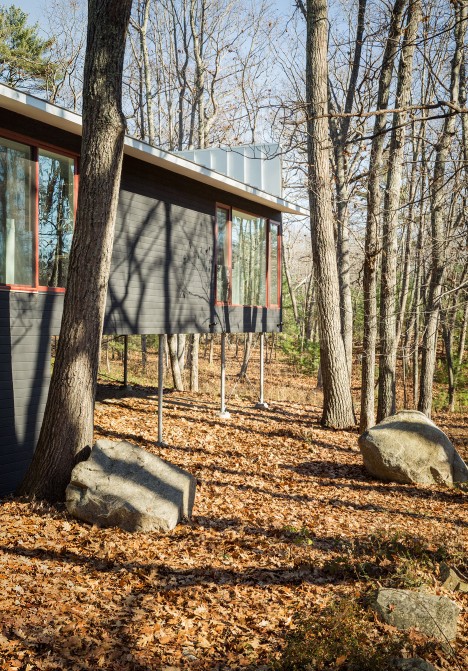 Maine architect Carol A Wilson has built a two-bedroom home in Batson River on the foundations of a ranch that previously occupied the site, to prevent disturbing nearby trees (+ slideshow).

The residence sits close to the Batson River, upstream from the eponymous estuary that leads to the Gulf of Maine. While the home is designed to allow its inhabitants to live on one level, a lower floor contains a guest suite and provides access to the river.

To reduce the environmental impact of construction, the architect reused the foundations of a ranch house that formerly occupied the plot.

“The site was essentially undisturbed except for the drilling of four wells for the geothermal heating and cooling system,” said the architect.

Several large oak trees sit so close to the house that they would have needed to be removed in order for any modifications to the foundations to occur.

On the upper level, the building cantilevers out from its original footprint. To accommodate this change without affecting the site, the architect opted to support the structure with slender columns resting on small concrete footings.

Guests enter the home from the north through a wooden walkway. The long passageway is sheltered by a canopy and runs along the side of the garage.

Upon entering the house, visitors are actually 10 feet (three metres) above ground due to the terrain’s slight grade.

The entire south facade of the residence is glazed, with floor-to-ceiling windows that provide “bird’s nest views of the river, the woods and understory, and in spring the flooded riverbank,” according to the architect.

All of the communal spaces are laid out on the main floor and illuminated by this long glazed surface. These windows are operable, and when opened provide the experience of “living in a screened porch”, said Wilson.

An actual screened porch is located on the west side of the house, which provides the residents with sunset views of Batson River.

To the east, the sleeping quarters are separated from the public areas by a laundry core and small library. The north portion of the house is occupied by a long corridor full of shelves, where the children store their belongings.

Black wooden siding and red trim around the windows and doors characterise the residence. On the interior, pale tones and understated finishes contrast the exterior treatment.

Another residence in Maine, House over the Sea, is also raised on stilts – reducing erosion and avoiding flooding at high tide. Other Maine houses include a cluster of homes on a rocky hillside and a modernist house clad in traditional cedar shingles.

Photography is by Trent Bell.