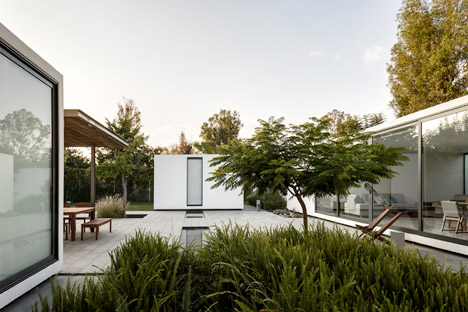 This house in Mexico for an elderly couple features four box-shaped buildings arranged around a central courtyard, three of which contain bedrooms and bathrooms for their visiting children (+ slideshow).

Casa 4.1.4 was designed by AS/D Asociación de Diseño as a weekend home for a couple in their 70s who have three children in their 30s.

“They asked for a weekend house in the short term, which could become a permanent home in the long term, where the children and family could visit without all being together,” the architects told Dezeen.

The house was built on a vacant site between two homes built in the 1980s on the outskirts of Santiago de Querétaro, a city in central Mexico. To shun views of these homes and make the most of the temperate climate, the four buildings were arranged to face in towards a central courtyard.

“The views of the neighbouring homes are not spectacular, so we dispersed the house and made it inward looking to create its own context,” said the Mexico City-based architects, whose other projects include a holiday home with hundreds of perforations across its facade.

The arrangement of the buildings transforms the outdoor space into an integral part of the home, both as a thoroughfare between rooms and as a central gathering space for the family. Other houses on Dezeen that use a similar tactic include a Vietnamese home on a constricted urban site with trees growing on the roofs of its five buildings, and a home for a film director near Marrakech, with four white rectangular buildings dotted around a two-hectare site.

“The central plaza is a space where the family can enjoy a variety of outdoor activities,” said the architects. “It creates an interior-exterior relationship, where all the rooms have a direct connection with their surroundings.”

The architects designed the house on a grid of squares measuring five by five metres, and came up with more than eight configurations for the four buildings before deciding on the final arrangement.

“By placing a grid on the site, we encouraged the owners to play with the position of the buildings, but always with the idea of a courtyard in the centre,” they said.

The four buildings feature glazed facades that open onto the courtyard and surrounding garden, and smaller slot windows to bring in light and maintain privacy.

The main building also features a small glazed courtyard in its centre to bring more light into the kitchen, dining room and living room around it.

The outdoor space is paved with granite and broken up with small pockets of landscaping, including two shallow rectangular ponds, and two Flamboyant trees, which are named after their spectacular display of bright red flowers when in bloom. The trees were primarily chosen for their wide shady branches of fern-like leaves.

“The ponds were added to invite birds and insects to the courtyard,” said the architects. “Lavender was also planted because it is known to attract bees.”

Marble was used for the flooring. Tzalam wood, which is a durable species common in Mexico, was chosen for all the doors and kitchen cabinets.

The house was built with brick and concrete blocks, with steel frames added to support the wide openings, and construction was completed in one year.

Photography is by Rafael Gamo Fassi.

The post Casa 4.1.4 by AS/D features separate living spaces for different generations of the same family appeared first on Dezeen.