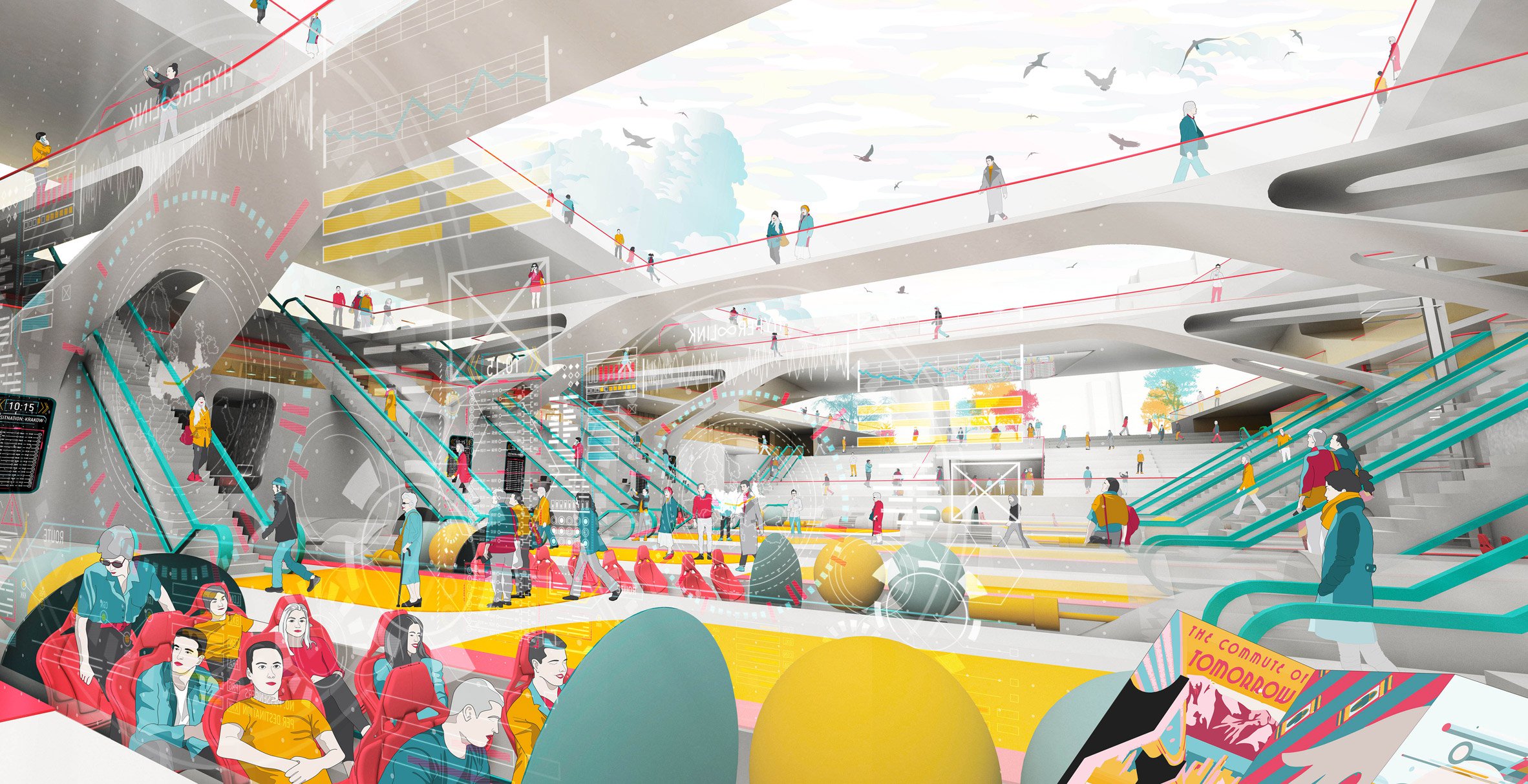 Bartlett School of Architecture graduate Cassidy Reid has designed a concept for a high-speed transport network based on Hyperloop to create infrastructural and cultural corridors across Europe, and shrink travel time between cities.

Connecting London to Krakow in just one hour and ten minutes, and passing through Brussels, Cologne, Frankfurt and Prague, Reid’s Pan-European Corridor network leverages newly developed Hyperloop technology to make Europe’s cultural corridor easily commutable while also helping to connect deprived communities that have been “left behind” by globalisation.

Hyperloop is the vision of entrepreneur Elon Musk, the founder of Tesla Motors, PayPal and space exploration company SpaceX. The system employs mag-lev — the same technology that is used by high-speed trains in Japan – in which the electromagnetic levitation of the train means there is no friction, unlike traditional trains that run on tracks.

Musk, who first unveiled the concept for Hyperloop in 2013, later open-sourced the technology and is no longer directly involved in its development.

In Reid’s Hyperlink masterplan, the corridor’s most populous and diverse terminus would be located in London. Integrated into a bridge on the River Thames, the high-speed twelve-track terminal is designed to “evoke a space-bending feeling of connectivity between other European major cities”.

In Reid’s renderings, the London terminal is imagined to the east of Waterloo Bridge and depicted at the centre of Queen Elizabeth’s Platinum Jubilee Pageant in the year 2022.

Reid designed the project during the 5th and final year of her architecture course at the Bartlett, where she was part of Dirk Krolikowski and Evan Greenberg’s Unit 14.

This year, Unit 14 students were encouraged to explore the use of innovative technologies in order to leverage design and speculate on cultural change throughout Europe. Krolikowski and Greenberg said their unit produces “architectures which have the potential to disrupt and augment what we think we know about Europe”.

Reid claim’s her Hyperlink masterplan is an “attempt to economically, socially and politically bridge Europe” and believes that the route would have the potential to become the backbone of free trade and movement in Europe.

“It is hoped that this continental intervention could be a catalyst for change,” said Reid. “The creation of new access routes opening up new opportunities for governments, cities, businesses and individuals.”

“The proposal forecasts a future in which Europe can sit as a result of emerging technologies. These advancements will hypothetically disintegrate European borders and ‘make Europe great again,” she added.

“Over time this extended network would become a net, stitching cities together and hopefully addressing the ‘left behind’ areas of rural, economic isolation whose dissatisfaction with globalisation is tearing the continent apart.”

Reid’s Pan-European Corridor project was presented at the Bartlett School of Architecture’s summer show, which took place from 24 June to 8 July.

Other projects on show included a masterplan for a new Chinese cultural capital and a feminist film featuring a conceptual housing estate where homes perform domestic chores.