The 2,000-year-old amphitheatre in Verona, Italy, could be transformed into an indoor stadium with this competition-winning proposal by German firms GMP and SBP. Architecture office GMP and engineering firm SBP won an international contest seeking ideas for a roof over the Roman arena, which was built in the first century but is still in use today as a major opera 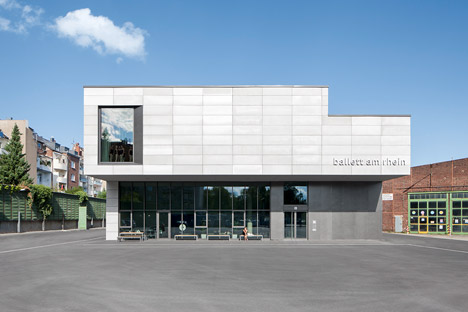 An overhanging upper storey clad in concrete panels leans out over the glazed entrance of this ballet rehearsal building, added to a former transportation hub in the German city of Düsseldorf (+ slideshow). The three-storey building designed by Hamburg office GMP Architekten for the Deutsche Oper am Rhein ballet company is located in Düsseldorf’s Bilk district, […]