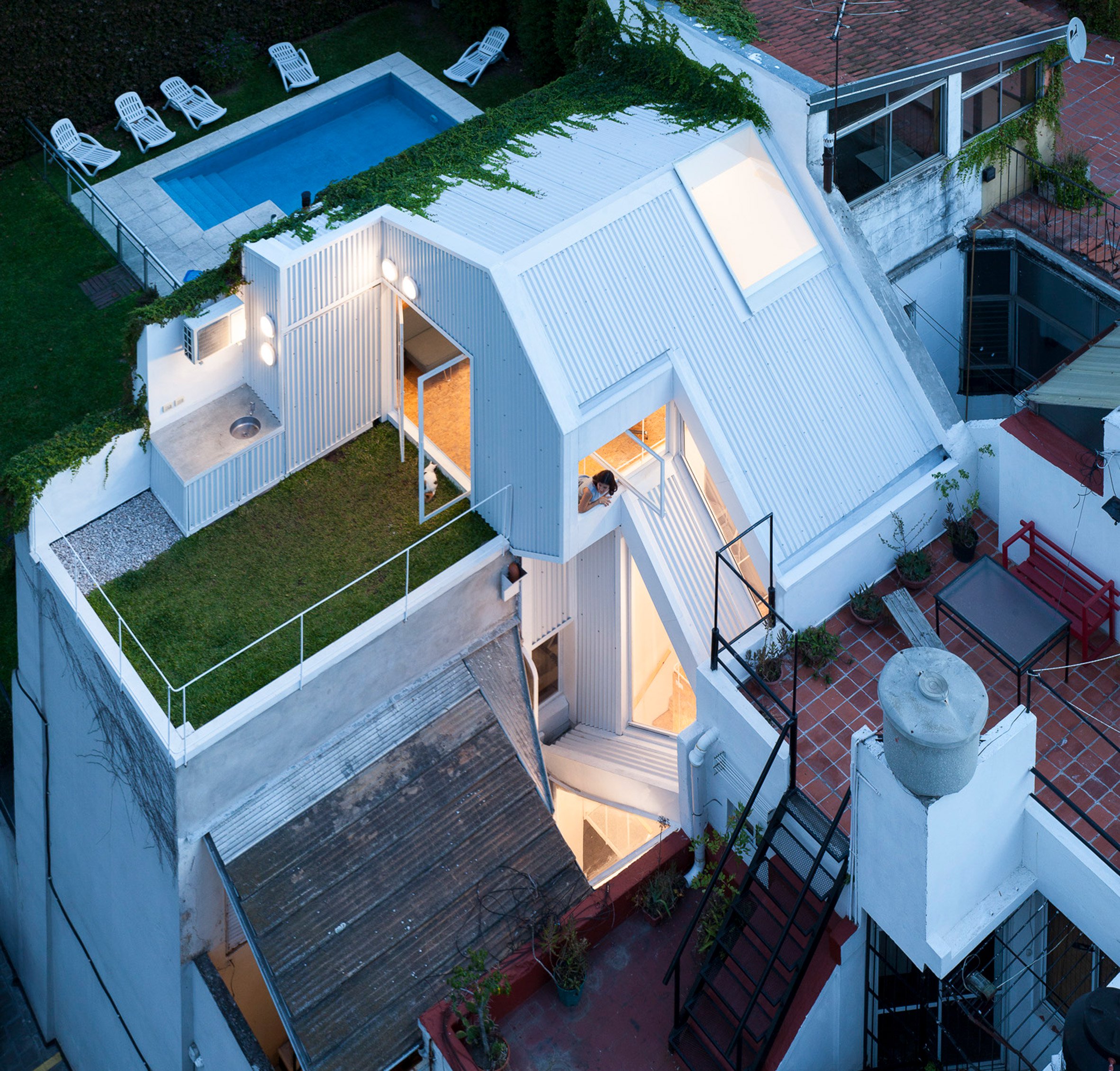 This small and narrow townhouse by Argentinian practice CCPM Arquitectos is slotted into a gap in a tightly packed neighbourhood in Buenos Aires.

The white, corrugated-metal roofs of the 89-square-metre residence slope in varying directions and at different gradients in accordance with the cramped plot.

Constanza Chiozza and Pedro Magnasco of Buenos Aires studio CCPM Arquitectos added slivers of glazing and windows wherever possible, to help natural light permeate down through the residence known as PH Lavalleja.

“PH is the name given to a traditional housing typology in Buenos Aires, characterised by its high density and low rise,” said Chiozza and Magnasco.

“Set in the last unit of a long plot, PH Lavalleja coexists with the neighbouring free-plan, high-rise residential buildings that surround it.”

“The rhythm of the existing infrastructure and the perimeter constraints are worked geometrically to generate the continuity of the envelope,” they added.

A white spiralling staircase rises directly up through one corner of the residence to link rooms stacked directly on top of one another.

The kitchen and dining room are set alongside the entrance at ground level, with the bedroom and bathroom on the floor above and the living room at the top of the house. A mezzanine level between the first and second floor offers a workspace.

The flat roof of a neighbouring property has been covered in a lawn and converted into a modest terrace, which almost doubles the living space and affords views out over the neighbourhood.

The walls and floors are throughout are lined with panels of chipboard, and wooden bookshelves and storage spaces are integrated into the stairwell and mezzanine.

Fellow Buenos Aires-based practice Adamo-Faiden has also created a number of infill properties and extensions making use of vacant rooftops and gaps in the city’s densely packed neighbourhoods.

For one project, the duo built a greenhouse-like structure over the top of a trio of 20th-century houses, while in another they crowned a 15-storey block with a foliage-covered pavilion.