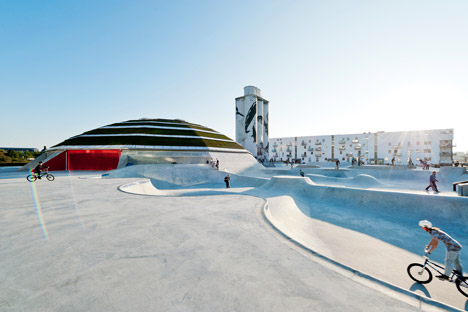 Danish studios CEBRA and Glifberg+Lykke have created an igloo-shaped street sports centre and a skate park on the harbour front of Haderslev, Denmark (+ slideshow).

CEBRA‘s domed sports centre houses facilities for street basketball, skateboarding, parkour and bouldering, while Glifberg+Lykke‘s 4,500-square-metre skate park is carved out of a concrete landscape behind.

The studios worked together to integrate the two parts of the site in the southern Danish town, so the dome appears to be “growing out of the concrete landscape like a mushroom”.

Glifberg+Lykke divided the outdoor skating and BMX area into three sections, including a “street plaza” that replicates obstacles found around urban areas, a “flow section” where skaters can work on their transitions, and a “park section” with ditches and banks.

“Every element and obstacle is designed for adaptive use so that new flows, rhythms and combinations can be explored and discovered over and over again,” said the designers.

Positioned between the landscaped area and the waterfront, the StreetDome’s roof spans 40 metres to create a large open space free of structural columns to make the building adaptable.

Glulam beams form ribs that emanate from the centre of the semi-sphere, which is covered in concentric rings of turf supported by wooden panels and translucent glazing.

Faceted green and white panels rise up one side to create a climbing wall with various grades of difficulty.

Spectators and athletes can relax on green bleacher seating, which wraps around a performance area and provides views of the basketball area and sloping basins for skaters. Bathroom facilities can be found underneath.

Gates in the structure open onto the skate park so users can rise seamlessly between indoors and out.

“StreetDome forms one continuous and varied spatial course, which gives Scandinavia a modern street sport arena with unique features and possibilities,” said CEBRA, which also recently completed a sports centre built like Meccano in the northern town of Løgstør.

The centre was created as a playground and social meeting place for people of different ages, skill levels and cultures.

“The project started out almost ten years ago as an initiative by local activist and chairman of the SkateCity association Morten Hansen, whose vision was to create a new cultural hub that incorporates a vast area for activity and recreation,” said CEBRA in a statement.

Photography is by Mikkel Frost/CEBRA.

The post CEBRA’s sports centre “grows like a mushroom”
from concrete skate park by Glifberg+Lykkeskate appeared first on Dezeen.