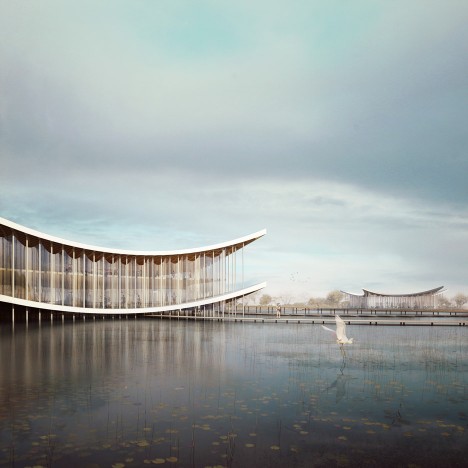 Visualisation artist Forbes Massie has exhibited a series of architectural renderings with a painterly rather than photorealistic aesthetic at the Protein Studios gallery in east London (+ slideshow).

London-based Massie – who counts Thomas Heatherwick, David Chipperfield and Haptic among his clients – showed 14 of his studio’s latest images for a two-day exhibition entitled Seduction of Light.

Rather than following the trend for photorealism that is popular with many CGI artists, Massie’s images are deliberately designed to “evoke atmosphere” in the same way as a painting.

“Our imagery is never intended to be a replacement for photography,” the artist told Dezeen. “Architects collaborate with us to produce images that evoke atmosphere. Often clients refer to this as ‘the magic’.”

Massie said the main difference between his visuals and the work of other artists is an increased level of grain and noise, intended to enhance the textural quality of the image. He also opts for a desaturated colour palette.

“Our style is always referred to as painterly and atmospheric,” he added. “With careful consideration of composition, light, colour and tone, we are able to make images that are completely seductive.”

Massie launched his studio in 2003, after originally studying product design. He now leads a team of 15 artists.

All 14 images on show have one thing in common – they all show an eye-level view. There are a variety of lighting and weather conditions, but the majority feature buildings shown face-on.

“We really enjoy being able to see the proportions of a facade; strong perspectives make the building fall away from your eye,” explained Massie.

“We create visuals as if you were to walk up to them once they are built, and therefore the composition needs to relate to human scale – we don’t do aerials for this reason.”

Seduction of Light was on show at Protein Studios from 2-3 July. As well as the 14 framed images on the walls, the studio also printed a series of postcards showing more of their recent visuals, which were displayed on a large table.