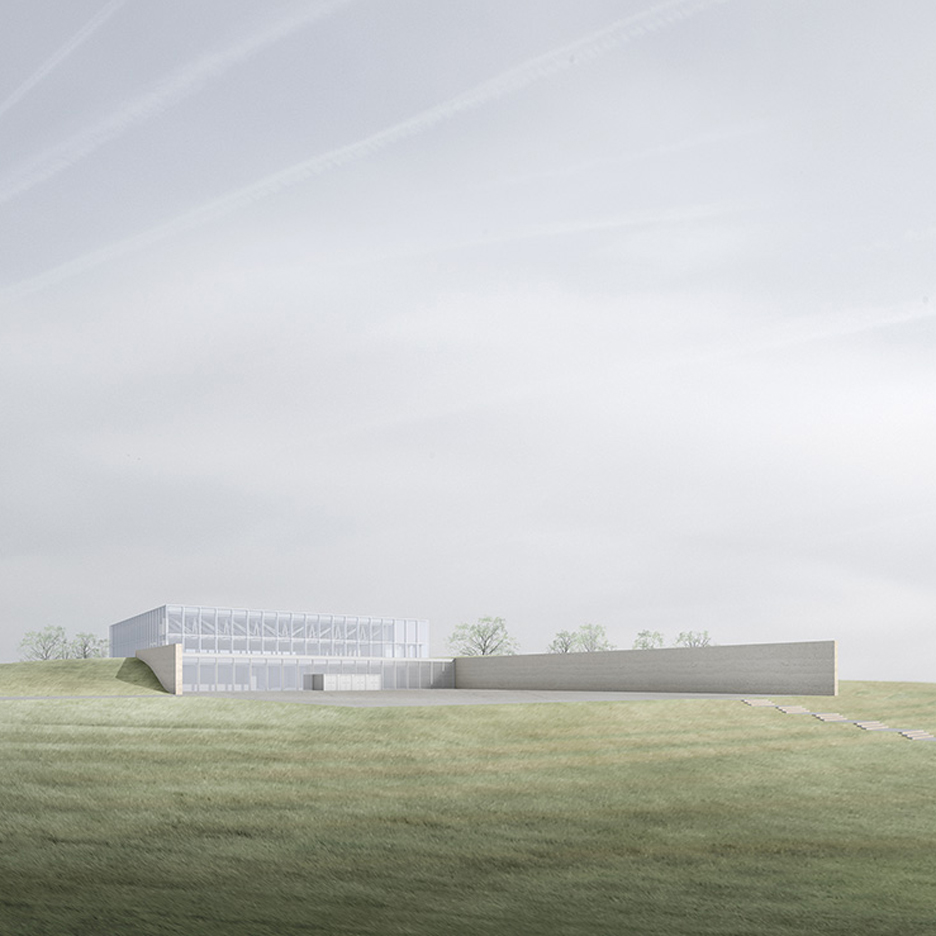 David Chipperfield Architects has released images of its design for a half-submerged concert hall bracketed by textured concrete walls in southern Germany (+ slideshow).

Chipperfield’s Berlin office won a competition to design the Carmen Würth Forum in 2006 for the cultural foundation supported by Adolf Würth, a German screw and tool manufacturer.

The forum’s chamber music hall and events space are now being built and scheduled for completion in 2017, while a conference centre and a museum to host the Würth art collection will follow in a second stage of construction.

It will be located near to Adolf Würth’s headquarters in the southern German town of Künzelsau and, like the Chipperfield-designed Fayland House in England, it will be partially buried in the pastoral landscape.

“The building is embedded in the landscape, characterised by expansive meadows and fields, which it integrates as an architectural theme,” said the studio.

The concert building will be split into two parts – a large events space with a capacity of 3,500 and a more intimate underground chamber music hall that can seat up to 500 people.

Grass will cover the roof of the chamber music hall, hiding it from above ground, while the upper gallery of the larger space will be glazed on all sides and project above the highest part of the terrain.

“From the outside this smaller hall is only perceptible as a modulation of the landscape,” said the architects.

Two textured concrete retaining walls will extend out from the front of the building to frame a forecourt by the main entrance. This area could also be used to host events including open-air concerts.

A foyer with a blood red carpet will lead to the large events space, which will feature terraced seating and be naturally lit by the glass walls that surround its upper level. The building’s steel structure, used to create a column-free space, will be left exposed across the ceiling.

Downstairs, the chamber hall will have wood-panelled walls and an upper gallery furnished with red upholstered seating.

The Würth art collection was started in the 1960s by Adolf Würth’s son Reinhold, who took over the company in 1952 , and now includes more than 17,000 pieces. The cultural complex is named after his wife, Carmen – the couple created the Würth cultural foundation together in the 1980s.