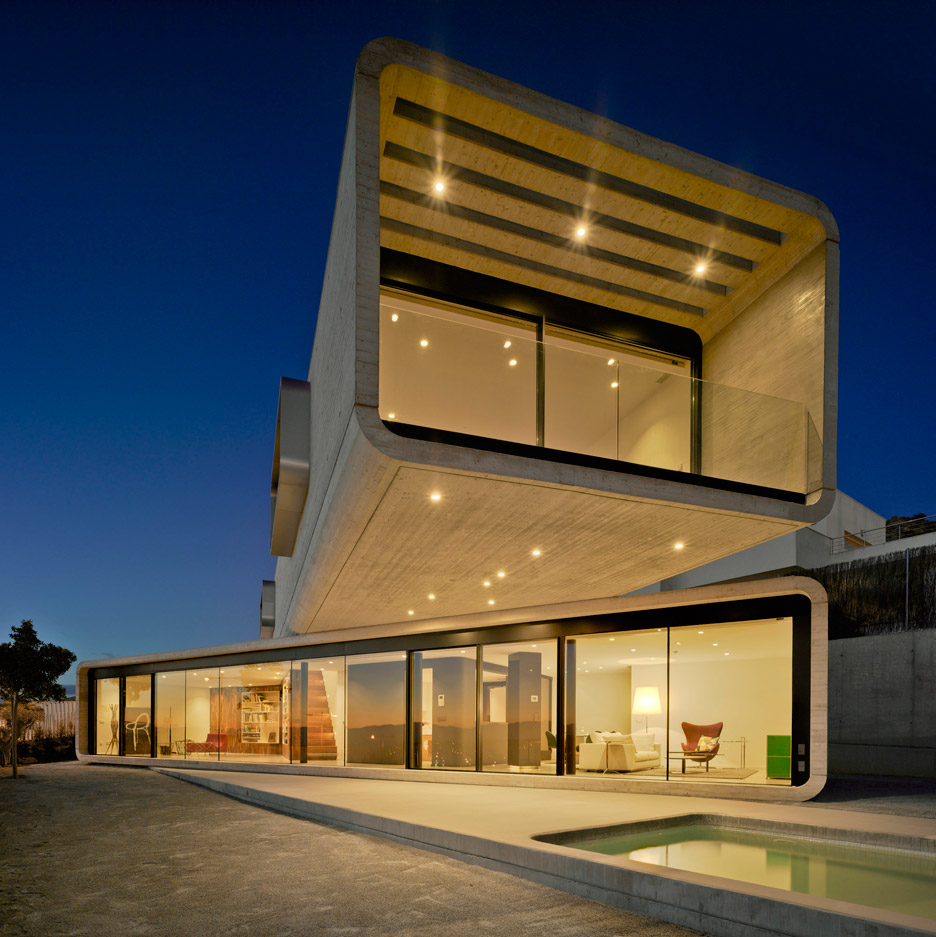 The upper storey of this concrete house by Clavel Arquitectos cantilevers out from the lower story by 10 metres, stretching towards mountain views in Spain‘s Murcia region (+ slideshow).

The residence is set within an area of Molina de Segura that is expected to become densely developed in the coming years. So Manuel Clavel Rojo’s studio sought to create a home that offers views of the Sierra de la Pila and Valle del Ricote mountains both now and in the future.

The idea was to separate the upper and lower floors, orienting a ground-level living space framing the garden and pool, and a first-floor bedroom block pointed towards the distant peaks.

The two floors are pivoted 35 degrees from each other, allowing the upper storey to cantilever 10 metres over its base. The residence is named Crossed House after this overlapping and pivoted arrangement.

“This conceptual setup is materialised by a geometrical operation, the rotation of two elements, as if it were two construction toy blocks that are stacked and handled easily,” explained the design team.

“These cantilevers, together with the rotation between both volumes, provide the necessary sun protection of the facade and pool residence.”

The volumes are 20 metres in length and five metres deep, and feature rounded corners and window frames. Glazing is set away from the edge of the blocks to provide some shade from intense midday sunlight.

“The expressive power of this formal configuration, very elementary in principle, is further enhanced by a subtle distinction between the two volumes: the edges are rounded according to the orientation of the main openings of each level reinforcing this way the autonomous nature of the volumes,” added the team.

Windows are aligned towards favourable views, with the lower floor given a glazed flank that opens onto the terrace. The glazed ends of the upper floor provide two bedrooms with views over the landscape.

A third buried volume forms the pool deck, which extends beyond the overhang of the cantilever.

While the exterior concrete finishes have a rough texture, concrete floors inside are polished smooth. Other details include wood panelling, grey-painted bookshelves and dark upholstery.

“The surface’s treatment of the concrete volumes provides a contrast between the outside with a rough finish created by a shuttering of sand-blasted pine strips and an interior of smooth finishes,” added the team.

Clavel Arquitectos is based in Murcia. Other projects by the studio include a mausoleum with zig-zagging doors.

Photography is by David Frutos/BISimages.