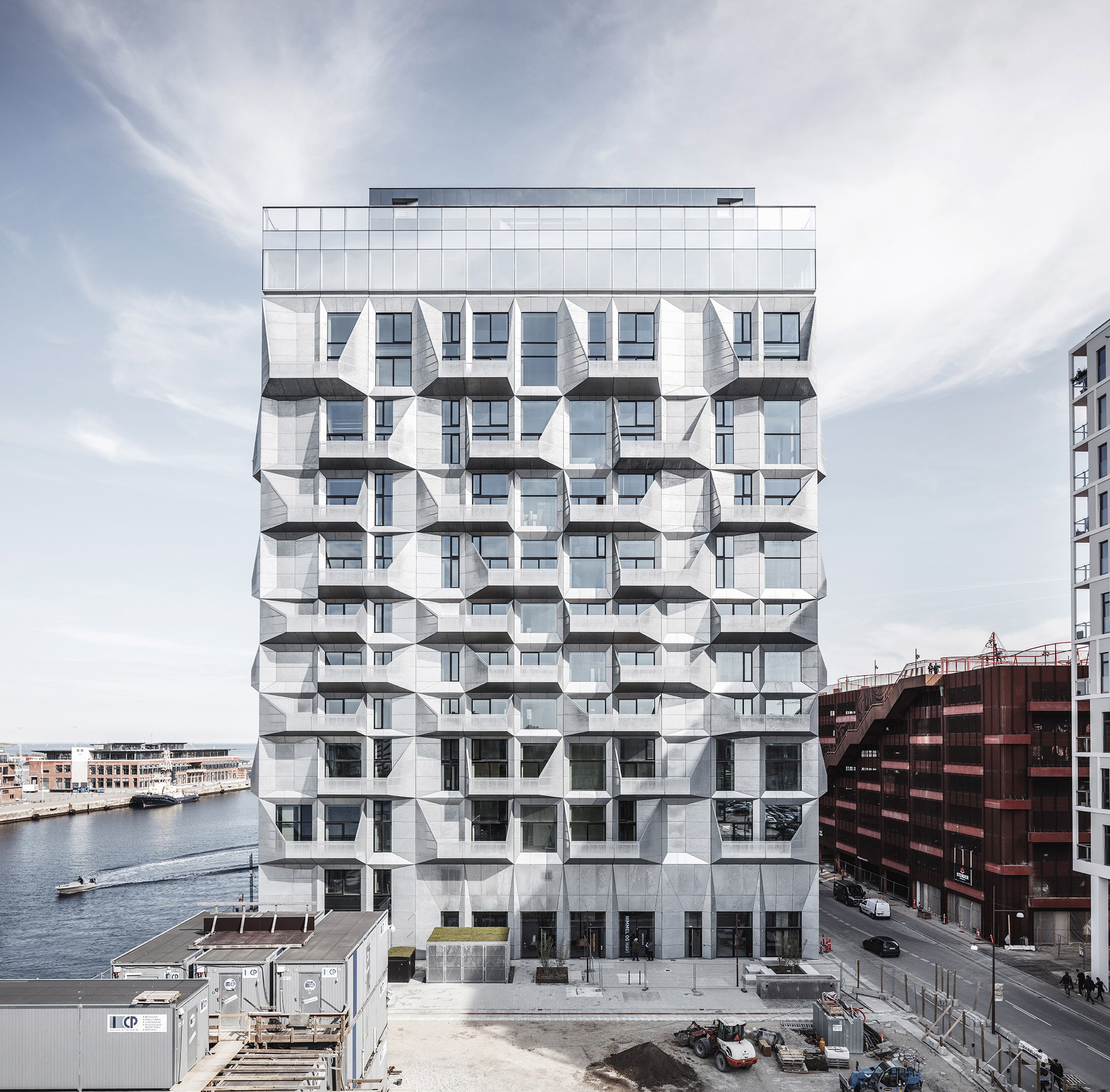 Galvanised-steel panels form faceted balconies and window surrounds on the exterior of this former grain-storage silo in Copenhagen, which Danish studio COBE has converted into an apartment building.

Local firm COBE was invited by the building’s owners Klaus Kastbjerg and NRE Denmark to oversee the transformation of the 17-storey building into 38 unique residential units, ranging in size from 106 to 401 square metres.

The building is located in the Danish capital’s Nordhavn area, which is being converted into a new city district that retains some of the original industrial structures.

COBE is involved in masterplanning this project, which will see up to four million square metres of the post-industrial harbour area developed over the next 40 to 50 years.

The former grain silo is the largest of the area’s industrial buildings and offered an opportunity to accommodate apartments, as well as public functions including a restaurant on its upper floor and an events space at ground level.

Its regeneration coincides with Heatherwick Studio’s conversion a grain silo in Cape Town into a hotel and art gallery. The hotel occupying the upper part of the building opened earlier in 2017.

In Copenhagen, the process of transforming the concrete silo into apartments required openings to be carved into the solid concrete facades, creating space for windows and balconies that wrap around all four sides.

A new layer of cladding made from galvanised steel was added to bring the facades up to contemporary standards, while maintaining the building’s overall tall, slender shape.

“We wanted to retain the spirit of The Silo as much as possible – both in terms of its monolithic exterior and majestic concrete interior, by simply draping it with a new overcoat,” said COBE founder and creative director Dan Stubbergaard.

The result is a sculptural surface featuring faceted protrusions, which cast complex shadows and add depth to the elevations. The perforated steel also helps to protect the balconies and interiors from direct sunlight and wind.

The choice of cladding material references the area’s industrial past through its raw toughness and texture. It will also take on a patina gradually over time in the sea air.

Inside the building, the architects sought to retain the silo’s existing character wherever possible. The vast internal spaces, which were used to store and handle large volumes of grain, allow various apartment configurations to be accommodated.

The 38 units range from single-storey apartments to penthouses arranged over two floors, with ceiling heights of up to seven metres. Full-height windows with frames concealed outside the existing walls provide views towards the city and the Oresund coastline.

The building’s existing concrete structure is exposed and is left bare in several of the apartments, enhancing the rugged industrial feel of the spaces.

On the roof is a mirrored glazed box that will house a restaurant scheduled to open later this year. Its surfaces reflect the sky during the day and allow light to permeate like a lantern at night.

The public will be able to access the restaurant and also have access to the flexible events space on the ground floor, which is currently hosting and exhibition about the development plans for Nordhavn.

“The Silo will be inhabited, but at the same time it will be a destination. An urban trigger and anchor point for the new development of Nordhavn,” he added.

In addition to Nordhavn, COBE is working on the redevelopment of other Copenhagen districts, including Christiansholm island, where it has completed a cluster of faceted brick apartment blocks influenced by local warehouses.