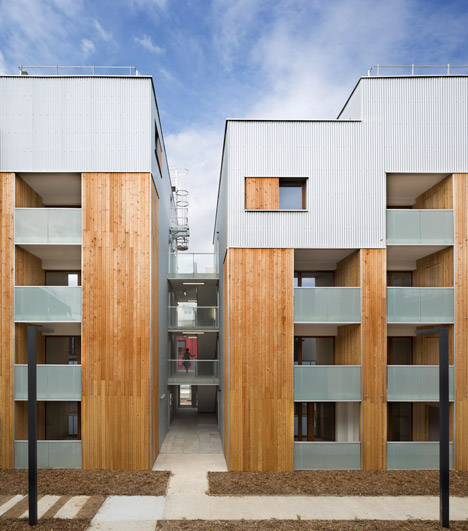 The stepped rooftops and industrial details of these Parisian council blocks by Colboc Franzen & Associés are designed to integrate the scheme with the neighbouring buildings (+ slideshow).

Colboc Franzen & Associés built the 52-residency scheme on an old industrial site in Nanterre, within The Hoche ecodistrict in the suburbs of Paris.

The site is bordered on one side by the A14 motorway, and on the other by parkland and low-level 1930s apartments.

The Parisian architecture firm created three different types of housing for the scheme, which is arranged around a central garden.

Dimensions of neighbouring buildings inform the scale of the individual blocks, which have facades clad in timber and metal, or coated in slate-grey paintwork.

“The challenge was to create a link between the new eight-storey towers and the smaller-scale of detached houses dating back to the 1930s,” the architects told Dezeen.

Panels of corrugated metal applied to the upper storeys of the wood-lined blocks visually break up their outline and lend an industrial feeling designed to resonate with the history of the area.

“Breaking up the street side of the buildings helps to recreate the varying heights of the neighbouring buildings,” said the architects, whose previous projects include an apartment block with a metal grid facade in the south of France.

Frosted-glass balconies set into the light-coloured timber facade provide each home with its own outdoor space.

In others, balconies cantilever out from the facade and have shutters made up from strips of timber that can slide across to conceal the interior space.

The flats within occupy the full depth of the block with windows on two facades. Open staircases run up the sides of individual timber-clad blocks providing upper-floor apartments with extra ventilation, light and access to roof terraces.

“Those cuts through the building help to recreate the varying heights of the neighbouring buildings and offer views from the street to the central court,” they said.

The staircases open out onto concrete walkways with metal banisters and caged ladders that connect to rooftop gardens.

“The metal cladding, caged ladders and lamps of industrial inspiration are set off by the warmer tones of the wooden window and door frames,” said the architects.

Stone pathways between the blocks lead through to a central garden and other areas of accommodation.

“The pedestrian walkways are fully planted with a wildflower meadow. To accentuate this concept, a landscaped central garden spreads across the ground level,” the architects told Dezeen.

On the other side of the green a slate-grey block with wooden window frames and cantilevered grey balconies contains three-storey townhouses, each with their own private gardens.

Rows of trees have been planted in a landscaped area to the front of the block, intended to screen the building as they mature.

The architects picked the slate-grey colour scheme so that the planting, rather than the building, would be the dominant feature.