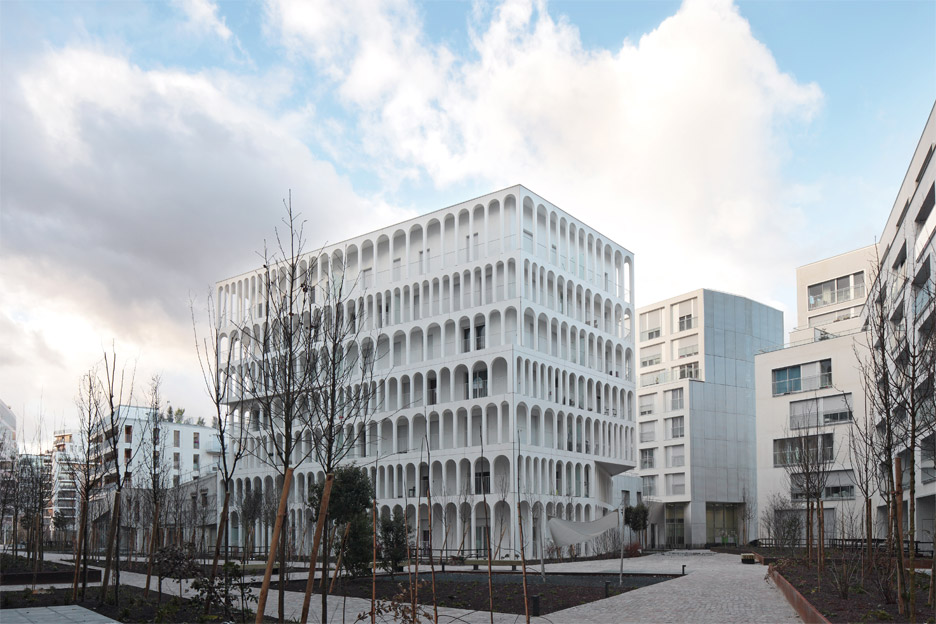 Antonini Darmon designed the €4.2 million building for a former industrial site in Boulogne-Billancourt, a suburb to the west of the city. It accommodates 33 apartments.

Named Arches Boulogne after its distinctive facade, the apartment block forms part of a wider redevelopment of the area that was once home to Renault car factories.

The building is located in the centre of its site so it can be admired from all sides. Colonnades surround all five facades, giving the building a Classical aesthetic.

The openings are based on the design of the old Renault factories. They are designed to frame views of the surroundings for occupants, as well as to shade the facades from direct sunlight.

“Visible from all sides, like a sculpture set on the ground, the building evolves evenly across each facade,” said the architects.

“The arch compositions are a contemporary interpretation of the Classical vocabulary of the former Renault factories, yet this second skin is not just a formal one,” they added. “The arches, in fact, extend around the building, fulfilling different functions, with the accent on accommodation.”

Seven architects were each asked to design a building for the scheme, called Macrolot B5. All chose to incorporate white concrete into their design to help visually connect the blocks, which all sit around a shared garden.

The width of the private balconies surrounding the seven floors depends on their orientation, with narrower terraces to the north maximising daylight and broader walkways on the other sides protecting against the summer heat.

“Despite the central location of the building the second skin also provides privacy, by preventing visibility of the interior from the outside,” said the architects.

“Moreover, the housing is multi-oriented, thus benefiting from natural light and solar energy throughout the day.”

Rain water is also collected in the building, and is treated onsite to ease the pressure on the existing urban drainage system.

“The Macrolot B5 works as an ecological hamlet, inviting people to meet, talk and reinforce a more environmental behaviour,” added the architects.

Arched facades have cropped up in a few locations recently. Stockholm firm Tham & Videgård Arkitekter employed a similar facade for a pair of housing blocks in southern Sweden, but instead used upside-down arches that create scalloped balustrades.

Photography is by Julien Lanoo, Benoit Fougeirol and Pierre L’Excellent.