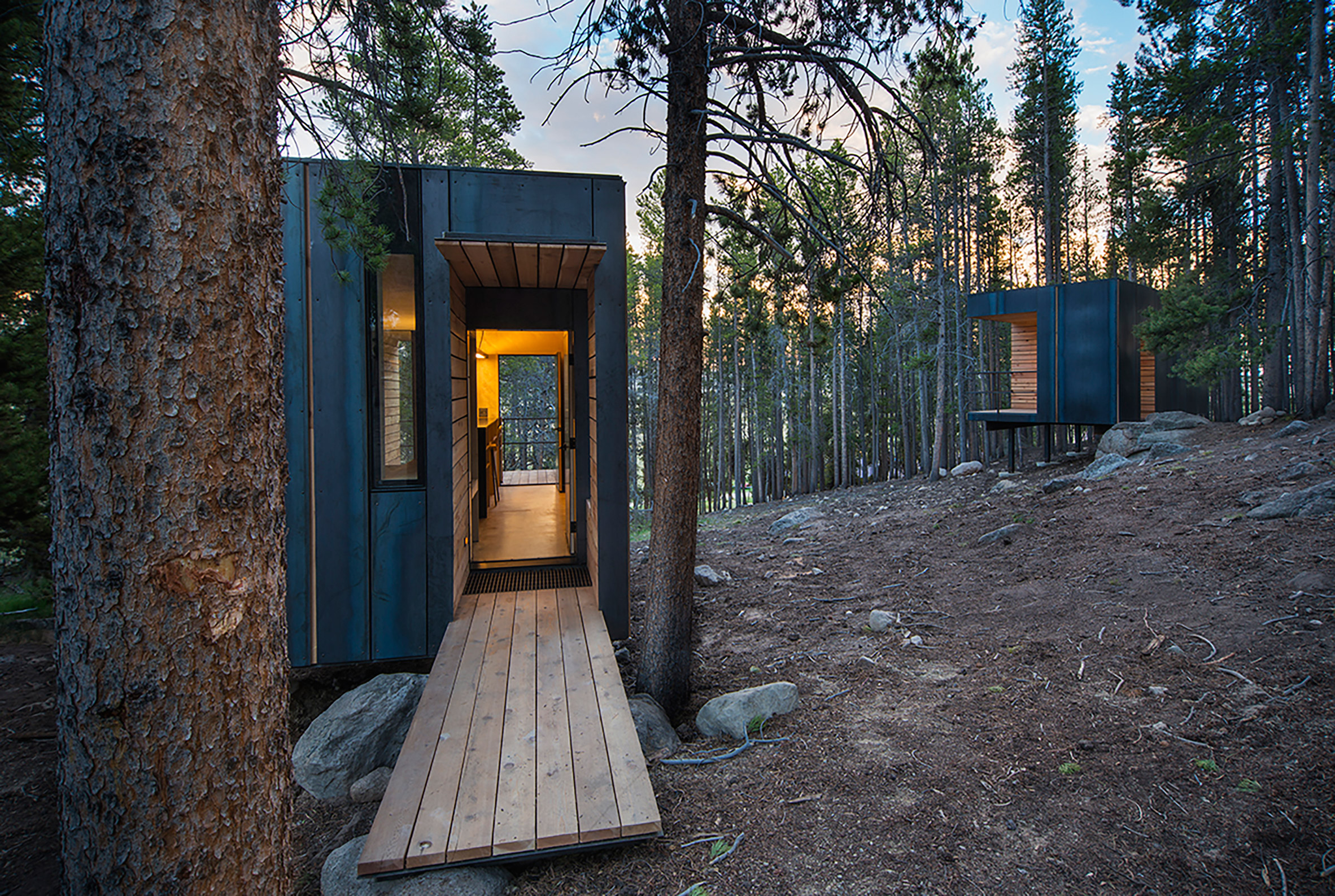 Students at the University of Colorado Denver have designed and built a series of rustic dwellings for a base camp operated by an outdoor education program.

The rugged structures were built for a base camp operated by the Colorado Outward Bound School (COBS), a nonprofit organisation focused on wilderness education.

The camp is situated in Leadville, a small Colorado town located 10,150 feet above sea level (3,093 metres).

“The orientation and articulation of each of the seven cabins react individually to the immediate site conditions present in the landscape,” the team said. “No two cabins are alike.”

The shelters were created by 28 students in the Colorado Building Workshop, a design-build programme in the architecture school at the University of Colorado Denver. The programme constructed 14 similar cabins for the COBS camp in 2015.

The new structures are skinned with sheets of hot-rolled steel, which form a low-maintenance rainscreen. Cedar-clad porches were carved out of the main rectangular mass.

The buildings are elevated off the ground by short metal columns with concrete footings. The composition is meant to “blend with the pine forest, minimising the visual impact”, while also reducing each structure’s footprint.

Given that Leadville’s average annual temperature is 35 degrees Fahrenheit (1.6 degrees Celsius), the cabins were designed to remain comfortable in extremely cold weather.

“Inspired by quinzees, a snow shelter made from a hollowed-out pile of snow, the students adapted the logic of ‘snow insulation’ for their structures,” the team said.

The walls and flat roofs were constructed using structurally insulated panels, or SIPs.

“The roofs are designed to hold snow in the winter, providing an additional R-20 to R-30 of insulation depending on the depth of the snow,” the team said, referring to the values used to measure thermal performance.

Inside, the cabins are sheathed in birch plywood, which lends a sense of warmth and draws connections to the surrounding trees.

A single electrical circuit powers each structure, including lighting, heating and receptacles used to charge mobile devices, mini refrigerators, tea kettles and other gear and appliances.

The camp contains a central lodge, where campers can bathe, cook and do laundry.

The cabins were the result of a studio in which students were asked to “create innovative solutions to prefabricated, accelerated-build, micro housing”.

The Denver university’s design-build programme has created a number of structures in the American West, including a modern home for a woman living on the Navajo reservation in Utah. The programme also collaborated with the University of Utah to build a pair of micro cabins made of pre-rusted steel and salvaged barn wood

Photography is by Jesse Kuroiwa.