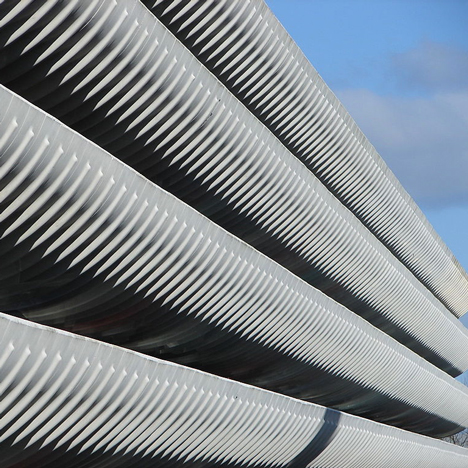 News: an international design competition has been launched to create a “state-of-the-art facility for young people” inside Preston Bus Station, an iconic Brutalist building in Lancashire, England.
The redesign of the western half of the 1960s building, which was saved from demolition in 2013, was initiated by local authority Lancashire County Council and community group Preston Youth Zone.

The competition is being managed by an arm of the Royal Institute of British Architects (RIBA), and aims to create a “youth zone” and a new public space, as well as improve pedestrian connections to the city centre.

“The plans will lead to an investment of around £13 million in Preston’s iconic bus station, which will see it become a catalyst for regeneration, more appealing to passengers and a home to the new Preston Youth Zone Plus; while preserving the building’s unique and Grade II-listed Brutalist architecture,” said a statement from RIBA Competitions.

“Central to the scheme, Preston Youth Zone will occupy around half of the space on the Holiday Inn side of the building, with a separate sports hall on the apron outside,” it added. “The Youth Zone will feature an indoor sports hall, outdoor pitches, a climbing wall, fitness suite and areas for music, dance, arts and crafts.”
Designed in the 1960s by Keith Ingham and Charles Wilson of architecture firm BDP, the building’s facade features four rows of sculptural concrete fins, shielding nine levels of parking space staggered across both sides of the structure.
Photograph by Flickr user SomeDriftwood
Completed in 1969, the 170-metre-long building was the largest bus station in Europe, with 40 gates for double-decker buses on its two longest sides. Its 4,250-square-metre double-height ground floor houses cafes, kiosks, and information and booking offices, in a central spine.
“Preston Bus Station encapsulates that rare period in the recent but now long distant past in which we as a nation took pride in lavishing time and money on creating collective spaces of quality and equality up and down the country,” architecture critic and broadcaster Tom Dyckhoff told Dezeen.

Under the council’s new plans for the building, only the eastern half will continue to function as a bus station.
A curved structure that currently houses the taxi rank will be repurposed to create new coach arrival and departure lanes in a separate project, and the central spine of retail space will be kept intact.
The remaining western half of the building is the focus of the competition, which will be conducted in two phases. Conceptual designs submitted for the first round will be judged anonymously, and five will be shortlisted for further development. The shortlisted design teams will each receive £6,000.

The county council plans to build the winning scheme, with the architects working alongside Lancashire’s own design and construction team.
Preston’s city council voted to demolish the Bus Station building in 2012, to make way for a smaller facility that would be cheaper to run.
It was saved by the government’s decision to grant it Grade II-listed status in September 2013, following a protracted campaign that won backing from preservationists and architects including Richard Rogers and OMA.
The post Competition launched to create youth centre inside Preston’s Brutalist bus station appeared first on Dezeen.