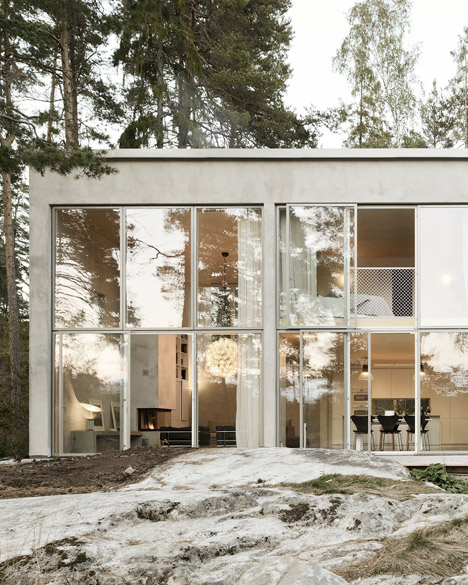 Positioned in a pine grove on the Swedish coastline, this concrete house features an entirely glazed facade so that residents can catch glimpses of the Baltic sea through the tree trunks.

Swedish studio Arrhov Frick were asked by a young couple to design the 220-square-metre home for a woodland clearing in Saltsjö-Boo, a coastal area just outside Stockholm.

Surrounded by pine trees, the rocky plot faces an inlet of the northern Baltic sea. It backs onto an access road for the area which, according to the architects, is mostly populated by holiday homes.

To direct views away from the road and towards the sea, the architects built a 5.4-metre-high wall as the southern facade of the property, while the northern comprises a grid of sliding glass panels. Six concrete walls span the two facades to create the interior layout for the house, giving the building its name – Six Walls House.

“The plot is long and narrow and extends between the road and the water. Perhaps as a contrast to the context, we wanted to build the house around a robust and clear material and concrete blocks with cement plaster became an important part.”

Concrete floor slabs are slotted between only some of the walls, resulting in a combination of single and double-height spaces.

A lounge occupies the full width and height of the structure at one end of the property, while a kitchen and bedroom suite occupy single-storeys spaces elsewhere on the ground floor. Three further bedrooms are situated on the upper storey, alongside bathrooms.

“Between some of the six walls there are casted slabs that divide the rooms horizontally,” explained the architect.

“The result is a sequence of different types of spaces with specific characteristics: a narrow and tall entrance situation, generous-sized bathrooms, bedrooms as balconies, a roof terrace among the pine trees, an intimate dining area and a generous living room with abundant light.”

Bedrooms and living spaces are positioned along the glazed facade to benefit from natural light and views, while secondary spaces are tucked away behind. The sliding glass panels open the house up to the forest.

The concrete slabs are left exposed across the walls and floors to create a pared-back interior, while ceilings are covered in panels of pale wood.

“We wanted to make the walls load bearing and in one material – inside and outside with no extra layers of paint or material,” Arrhov told Dezeen. “Just the structure in itself, raw concrete.”

A spiral staircase rises up below a circular skylight, intended as a contrast to the linear form of the building. The staircase, mesh balustrades and first-floor landing were constructed from white lacquered steel, matching the window frames.

“In addition to this strictly orthogonal house, a circular stair serving the vertical communication from ground floor to the roof felt natural as well as highly effective in this plan,” added Arrhov. “The skylight covers the entire diameter making you walk visually towards the sky.”

Photography is by Mikael Olsson.

The post Concrete and glass house completed by
Arrhov Frick in a Swedish woodland clearing appeared first on Dezeen.