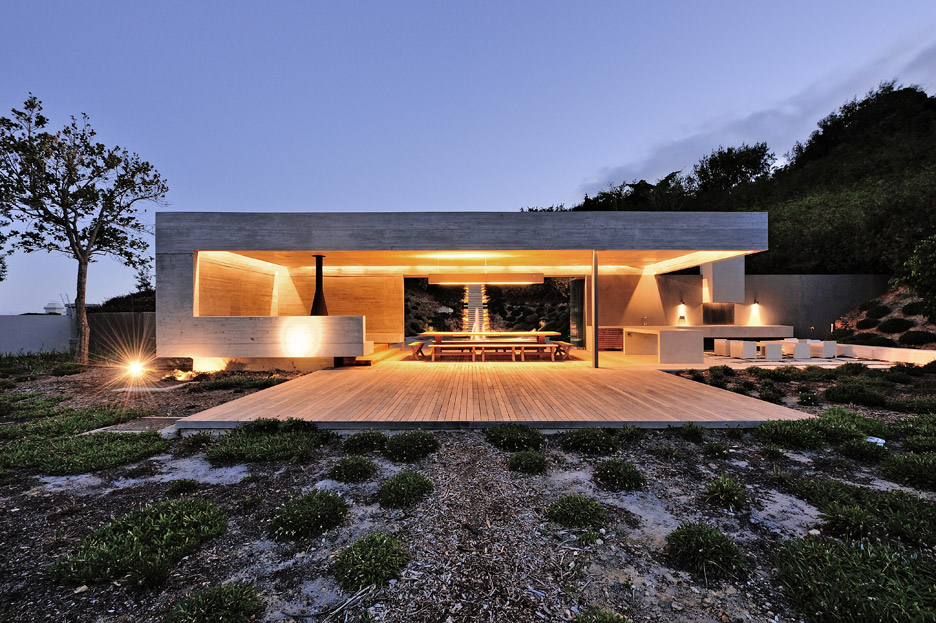 South African studio Metropolis has completed a concrete pavilion in the grounds of a house in Cape Town, featuring sheltered seating and dining areas with views of nearby Table Mountain (+ slideshow).

The Midden Garden Pavilion was designed by Cape Town-based Metropolis as part of the renovation of the villa and its grounds in the affluent suburb of Constantia.

The owners wanted to introduce a pavilion to their large terraced garden to allow them to entertain guests while also enjoying views of the nearby mountains and coastline.

Situated at the southern end of the grounds, on a site overlooked by the main house, the pavilion is made up of a series of thick concrete slabs.

These combine to create a shelter that extends out from the hillside. The roof canopy rests on walls at the rear and is supported by a slender pillar at the front, creating an expansive open area beneath.

“The abstract form is neither purely aesthetic nor purely rational,” claimed Metropolis.

“It is conceived to be elemental, of itself, more of an object than a building, which can compete in its perceptual power with the strength of the surrounding landscape on the one had and the artificiality of its immediate surroundings on the other.”

An enclosed space at one end shelters benches incorporated into the structure, surrounding a fire pit and its suspended chimney.

A large dining table occupies the central area, with a food preparation counter also positioned below the roof.

There is also a work surface that extends along one wall, towards an open-air patio incorporating a barbecue.

A small kitchen and food storage space are located in the block that stretches back to meet the hillside. A toilet and outdoor shower are tucked away behind the kitchen.

The pavilion occupies an area where an extravagant water feature with cascades, ponds and fountains was previously located. Only one pond and fountain remain, and the building sits alongside.

“[The owners] requested that it be toned down and incorporated into a meaningful outdoor relaxation area for the appreciation of the back of Table Mountain to the north,” explained the architects.

The fountain sits in front of some existing steps incorporated into a raised bank, which the architects extended to form a natural basin around the pavilion.

Wooden decking forms the flooring within the pavilion, but also extends towards the garden at the front and rear, accentuating the axis between the fountain and the villa.

“The building is intended to be of nature: to contain a distillation of landscape which then allows it to be naturally contained by its surroundings,” the team added.

Other recent designs for garden pavilions include a small smoking room in Zurich made from slightly translucent concrete, and a cedar-clad office-cum-yoga studio at the end of a garden in London.