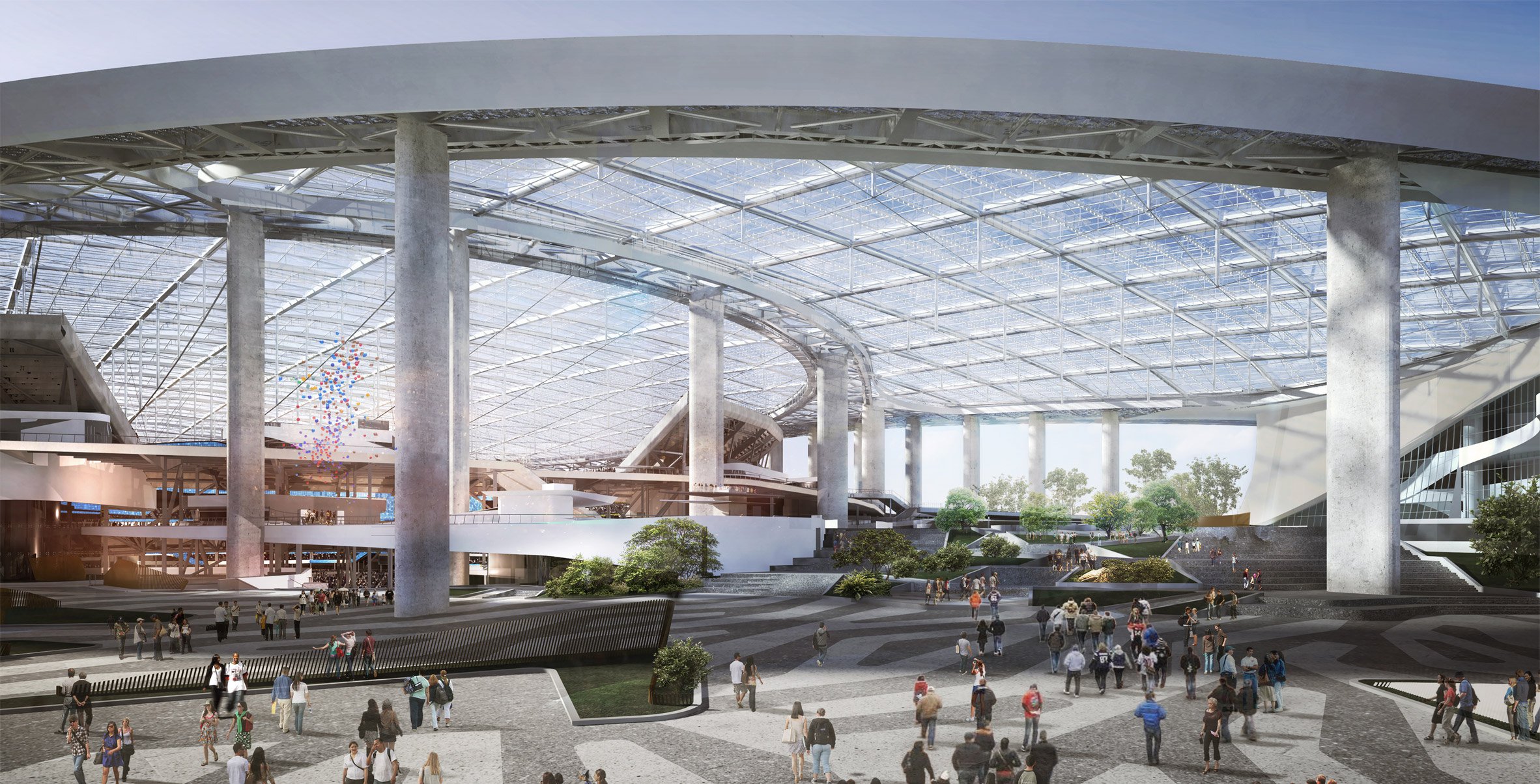 HKS Architects has revealed its design for the new home of American football team LA Rams, which will feature a giant, sculptural roof made of perforated metal and see-through plastic film.

It is being constructed on the site of a former thoroughbred race course, as part a new mixed-use entertainment district.

The design features a light-coloured, perforated metal enclosure supported by enormous columns. A portion of the roof will be composed of ethylene tetrafluoroethylene (ETFE), a fluorine-based plastic whose transparency is intended to give the arena an outdoor feel.

The sculptural roof will cover the playing field and an adjacent lobby dubbed “champions plaza”.

“ETFE is a lightweight, transparent roof membrane that will create the atmosphere of an open-air environment while protecting patrons from the elements,” said HKS Architects, a US-based firm with offices around the globe.

The venue will contain 70,000 fixed seats, with the ability to accommodate 30,000 additional spectators in standing-room areas.

The scheme was inspired by the region’s climate and “cultural DNA”, according to HKS.

“We have crafted a design that is responsive to its site, the community and the global stage of sports and entertainment,” said Mark A Williams, a principal at HKS.

“We believe this project represents a very important piece of architecture for Southern California and will broaden the fan experience in sports and entertainment venues.”

A groundbreaking was held on 17 November, with completion scheduled for 2019. The $2.66 billion project (£2 billion) is backed by Kroenke Sports & Entertainment, which owns the Rams.

LA–based Mia Lehrer + Associates is serving as the landscape architect.

The arena could figure into the city’s bid to host the 2024 Summer Olympics. It could also become the home of the San Diego Chargers, another American football team in Southern California. The Chargers’ plans to construct a Populous-designed stadium were sunk after voters rejected a tax hike that would have funded the project.

Other stadium projects underway in the US include an arena for the Washington Redskins football team by BIG, which is set to feature a moat offering an assortment of sporting activities.