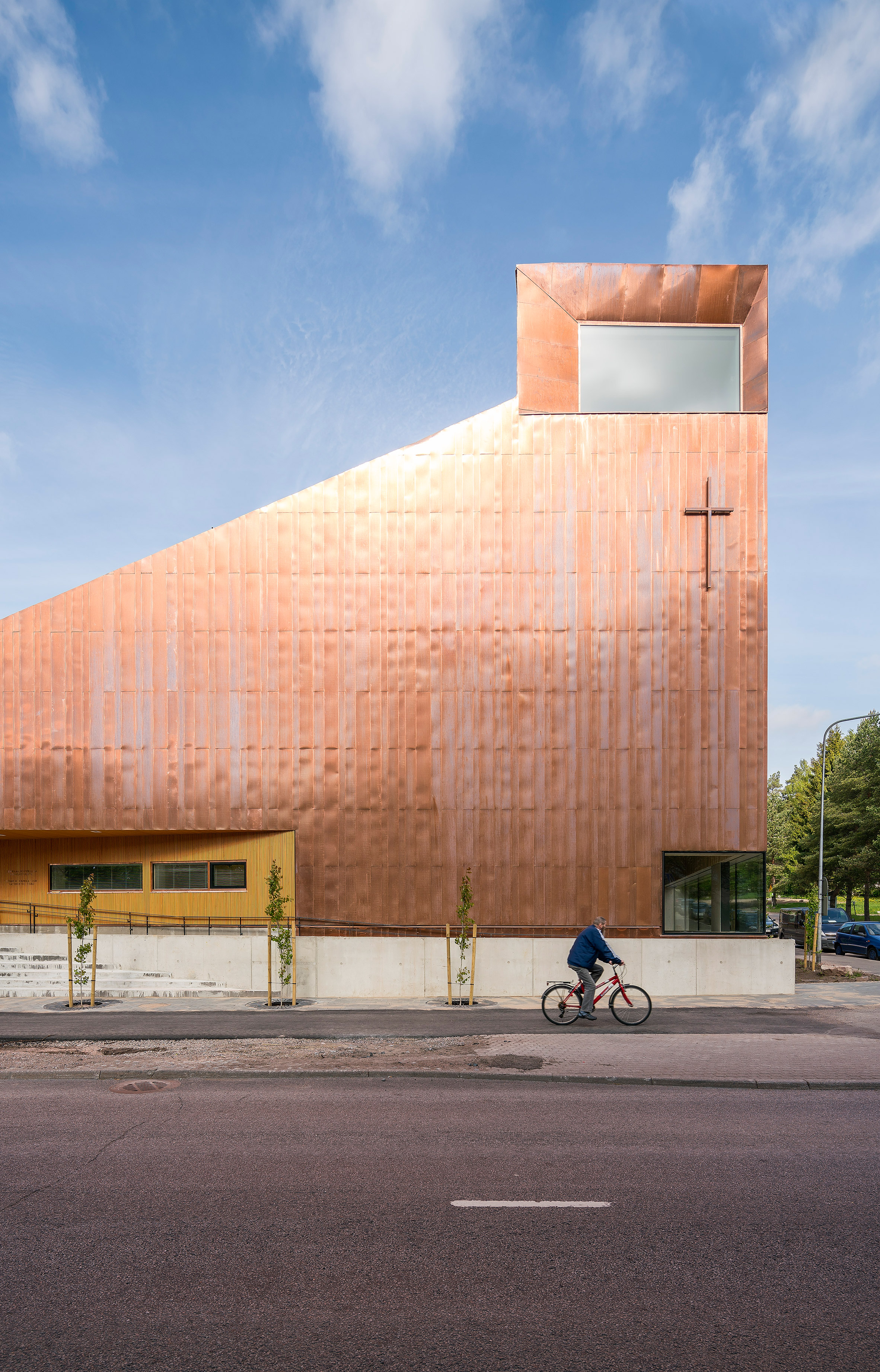 Copper covers walls and roof of Finnish chapel by OOPEAA

Located in Espoo, a city just west of Helsinki, the Suvela Chapel was designed by OOPEAA principal Anssi Lassila to provide a hub for the neighbourhood, as a venue for both religious and community events.

Copper panels clad all of the exterior walls, as well as a large roof that angles up to match the height of surrounding buildings.

Lassila felt that using a single material for the entire exterior would help to unite the building’s various functions, while also offering a sense of warmth. He chose copper, in part because of its sustainable credentials.

“It is both durable and recyclable, easy to maintain and therefore sustainable,” he explained. “It also ages well and acquires a beautiful patina over time allowing the age of the building to show.”

By contrast, wood dominates inside the building, paying tribute to Finland’s timber-building heritage. Walls and the underside of the roof are covered in spruce panels, which are textured with ridges to improve acoustics.

Lassila described the result as a “warm and peaceful atmosphere”.

The layout of the building is kept as simple as possible, with all rooms at ground-floor level. A U-shaped floor plan divides the interior up into three wings, wrapping around a secluded courtyard.

The main chapel hall is located at the northeast end of the building, directly accessed via the main entrance. This can be used for mass, weddings, funerals or music concerts.

To one side, the smallest part of the building houses the parish facilities, while the southwest wing contains community services, including a kindergarten, a youth club, adult learning and a soup kitchen.

“Due to the relatively long, dark, and cold winters, communal indoor spaces play an important role as places for people to gather in Finland,” said Lassila.

“Public buildings, such as schools and libraries, as well as churches and chapels, offer spaces that are open to all.”

“Providing schools, libraries and churches as places where people can come together in shared space has deep roots in the cultural tradition of Finland,” he added. “The Suvela Chapel is part of this tradition.”

The chapel was one of four projects shortlisted for last year’s Finlandia Prize, which recognises the best new buildings either in Finland or by a Finnish architect.

OOPEAA won the prize in 2015, for its innovative wooden apartment block in Jyväskylä, but missed out in 2016 to a spectator stand at a sports centre in Rovaniemi.

Photography is by Marc Goodman.

The post Copper covers walls and roof of Finnish chapel by OOPEAA appeared first on Dezeen.