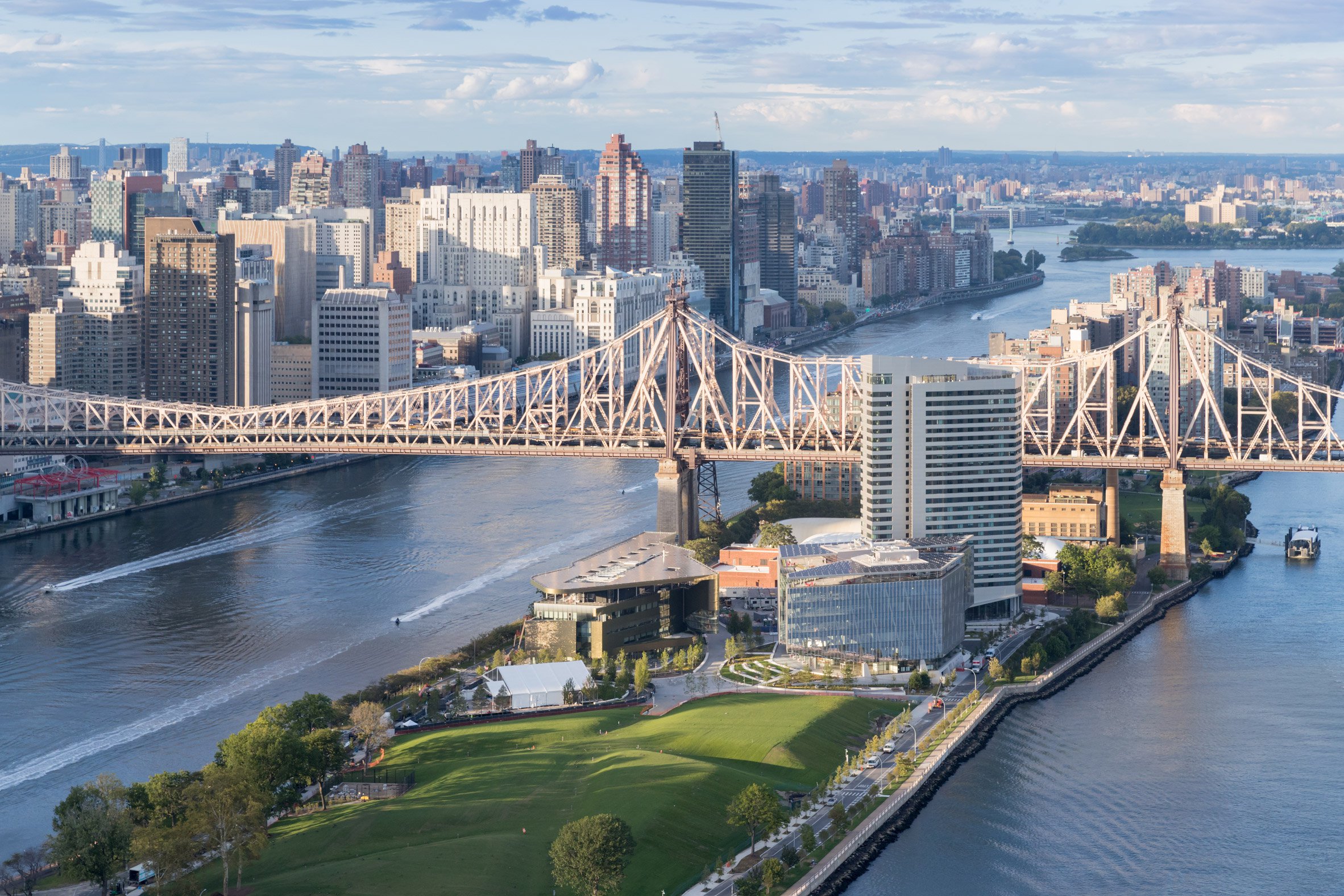 Morphosis and SOM were among the architecture firms involved in the design of a new permanent home for Cornell Tech university, described as “the first campus ever built for the digital age”.

The Cornell Tech campus, which opened last week, was constructed on a slender island in New York’s East River, between the boroughs of Manhattan and Queens. The graduate school, which currently has 300 students, is a partnership between Cornell University, a private university based in Ithaca, New York, and Technion – Israel Institute of Technology, a public university in Haifa, Israel.

Aiming to bolster New York’s tech industry, Cornell Tech consists of not only students and faculty, but also tech entrepreneurs and business leaders. “Cornell Tech is the first campus ever built for the digital age, bringing together academia and industry to create pioneering leaders and transformational new research, products, companies and social ventures,” said the university.

Skidmore, Owings & Merrill, or SOM, conceived the masterplan for the 12-acre (five-hectare) campus, which was built on city-owned land. The first phase of construction, which began in 2015 and completed this month, consists of three buildings, each designed by a different architect. James Corner Field Operations envisioned the landscaping.

The Bloomberg Center – created by Morphosis, the Los Angeles studio founded by Pritzker Prize laureate Thom Mayne – is billed as one of the largest net-zero academic buildings in the country. Roughly rectangular in plan, the academic building rises four storeys and encompasses 160,000 square feet (14,864 square metres).

The building is wrapped in glass and perforated metal panels. On the west facade, the perforations form a grey-scale image of the Manhattan skyline, while the east elevation depicts an image of a famous gorge near Cornell’s main campus in upstate New York.

Topping the facility is a massive canopy with 1,465 photovoltaic panels, which generate power for the facility. The canopy also shades the building, in turn reducing heat gain and thermal loads.

The Bloomberg Center’s other sustainable features include a closed-loop geothermal well system for cooling and heating, a rainwater harvesting system, and smart building technologies that were developed by Morphosis in collaboration with the engineering firm Arup.

“The aim of Cornell Tech to create an urban centre for interdisciplinary research and innovation is very much in line with our vision at Morphosis, where we are constantly developing new ways to achieve ever more sustainable buildings and to spark greater connections among the people who use our buildings,” said Thom Mayne.

“With the Bloomberg Center, we’ve pushed the boundaries of current energy efficiency practises and set a new standard for building development in New York City.”

The largest building on campus is The Bridge, which totals 235,000 square feet (21,832 square metres). Designed by local firm Weiss/Manfredi, the seven-storey facility aims to generate a high level of dialogue and collaboration. Communal gathering areas were placed on each level, including the roof, where occupants can congregate under a solar trellis.

“The building is a crystalline social condenser, one that reveals expansive skyline views and creates spaces for academics and entrepreneurs to slow down, talk to one another, and generate ideas in unprecedented ways,” said Marion Weiss and Michael Manfredi, the firm’s co-founders.

“The House is a groundbreaking example of sustainable architecture – the largest and tallest Passive House building in the world,” said Gary Handel, president of Handel Architects. “It’s our answer to the call for change to combat global warming.”

The campus’ open space, designed by James Corner Field Operations, is intended to foster collaboration and encourage visits from the general public. Primary elements include the Campus Plaza, a gathering space that can accommodate large events, and the Tech Walk, a “central spine” that links to pedestrian pathways.

“Each of the open spaces work together to provide settings for students, faculty, staff and visitors to sit, talk and collaborate, creating a lively, welcoming and social environment,” said Karen Tamir, a principal at the landscape architecture firm.

The landscape design team incorporated a number of sustainable features, including rain harvesting for irrigation, subterranean gravel trenches that hold and slow down stormwater, and bio-filtration gardens that treat stormwater runoff non-mechanically before it enters the river.

Later this year, Cornell Tech will begin construction on two additional buildings: the Verizon Executive Education Center and Graduate Roosevelt Island Hotel, both designed by architecture firm Snøhetta. The buildings are scheduled to open in 2019.

The proposal for Cornell Tech won a city-led competition in 2011 that was initiated by former mayor Michael Bloomberg. The project has been managed by the city’s Economic Development Corporation.

Dubbed the “School of Genius” by local media, Cornell Tech was housed inside Google’s headquarters in Manhattan from 2012 until this month.

Photography is by Matthew Carbone for Morphosis, unless stated otherwise.