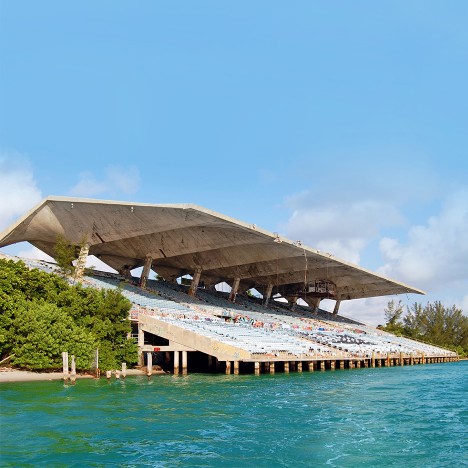 Heineken and the National Trust for Historic Preservation are hosting a crowdfunding campaign to raise money for the resurrection of a 1960s Miami stadium designed by Cuban architect Hilario Candela.

Called Save Your Seat, the Indiegogo campaign aims to raise money for the restoration of the Miami Marine Stadium – a 6,566-seat waterfront sports venue that has sat abandoned for more than two decades.

The campaign is hosted by the American division of the beer company Heineken and the National Trust for Historic Preservation, a privately funded US nonprofit group.

The money will go toward the project’s first phase, which calls for removing and replacing dilapidated seats in the building. The full restoration is expected to cost about $40 million (£30.2 million), according to reports.

Contributors to the current campaign will receive various gifts depending upon their donation amount, from an original seat to a printed photograph of colourful graffiti that now adorns the neglected building.

Situated on the edge of Biscayne Bay, the stadium opened in 1963 as the first powerboat racing venue in the US. It also became a popular concert venue, with bands such as the Rolling Stones and The Beach Boys playing on a stage that floated in the water. Political rallies, religious services and beauty pageants were also held there.

Built by the city, the stadium was designed by architect Hilario Candela, then a 27-year-old Cuban immigrant who was working in Miami.

The stadium features a 326-foot-long (99-metre) roof that, at the time of its completion, represented the longest span of cantilevered concrete in the world. The massive, folded roof covers a grandstand that partly extends into the water.

The building was abandoned after suffering damage from Hurricane Andrew in 1992.

Various proposals have been put forth over years, from razing the structure to resurrecting it. In 2009, the National Trust named the stadium one of America’s most-endangered historic places, and the World Monuments Fund placed the building on its “watch list” of threatened sites around the world.

A group called Friends of Miami Marine Stadium have been working since 2008 to save the structure. In 2013, the city approved a plan to restore the building, and the city recently allocated $4 million (£3 million) to further the effort.

“Miami Marine Stadium is one of South Florida‘s most distinctive landmarks, emblematic of Miami’s rich culture, diverse history and strong relationship to the water,” said Stephanie Meeks, president and CEO of the National Trust and a longtime advocate for the building’s revival.

The crowdfunding campaign provides a way for “everyone to get involved – through donations large and small – to contribute to the next phase of the stadium’s future and to help save a place that matters”, Meeks added.

The campaign is part of Heineken’s Cities initiative, which aims to help revitalise urban areas in the US. The company plans to launch additional Indiegogo campaigns for select projects later this year.

Crowdfunding is increasingly being used to get public architecture projects off the ground. Plans for an underground park in New York City, a floating cycle route in London and a 400-metre-long pedestrian bridge in Rotterdam are among the projects that have received support through crowdfunding.