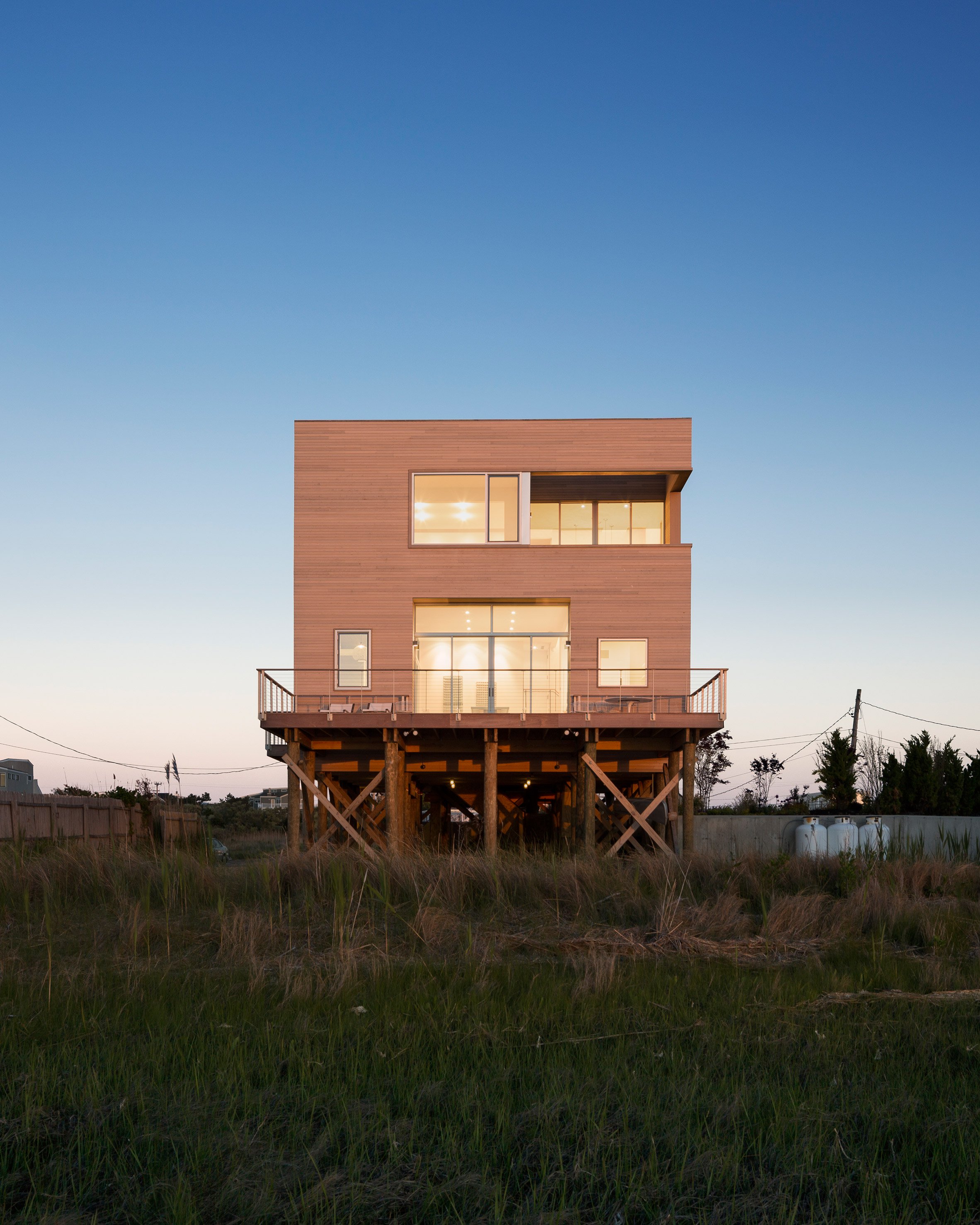 Flood danger and a footprint restriction led to the elevated cube-like design of this Hamptons house by New York firm Leroy Street Studio.

The Cube House is located beside Westhampton Beach in Long Island, and area popular with wealthy New Yorkers who like to holiday a short ride from the city. It was designed for multiple generations of a family, who wanted large spaces for entertaining and cosy areas for relaxing in privacy.

The site was previously occupied by an 800-square-foot (74-square-metre) shack and deck, which were damaged beyond repair by a series of storms.

Planning restrictions meant that the previous footprint could not be increased, so the architects designed an almost cubed-shaped structure – 40 by 30 by 30 feet (12 by nine by nine metres) – to accommodate all the required spaces.

“Conceived of as a floating cube perched on timber piles, hovering over the wetlands, the house is a deceivingly simple platonic mass that conceals a complex multi-level dwelling and exterior spaces within its volume,” said Leroy Street Studio, which provided both design and build services for the project.

As it is located in a flood zone, the building had to be raised 11 feet (3.4 metres) above grade. Thin stilts elevate the structure, and a staircase doglegs up to the first level.

From the double-height entrance foyer, an open-plan kitchen and dining area unfolds to the left. Large portions of glazing lead onto a partially covered balcony and a separate, larger porch at the back.

Up a few steps from the front door is the master suite, which occupies the full slightly lifted level. The extra space beneath is used for mechanical services.

A full stair flight divides the plan in two and continues up to the second-storey lounge. The entertaining space comes complete with a bar, and also opens onto a terrace through sliding glass doors.

Bedrooms and bathrooms for the children and grandparents are slotted into the other half of the upper floor. White surfaces and wooden floors feature throughout.

Flush, thin wood boards wrap horizontally around the exterior, interrupted by large openings that allow plenty of light inside. “The facade is a playful composition of carefully located openings that obscure the scale of the building and highlight scenic views out to the surrounding water,” Leroy Street Studio said.

The firm has completed a couple of similar projects on Long Island, including a cedar-clad villa raised on timber pilotis and a retreat that provides glimpses of nearby water on arrival.

Photography is by Chris Payne.

The post Cube House by Leroy Street Studio is a family beach retreat in the Hamptons appeared first on Dezeen.