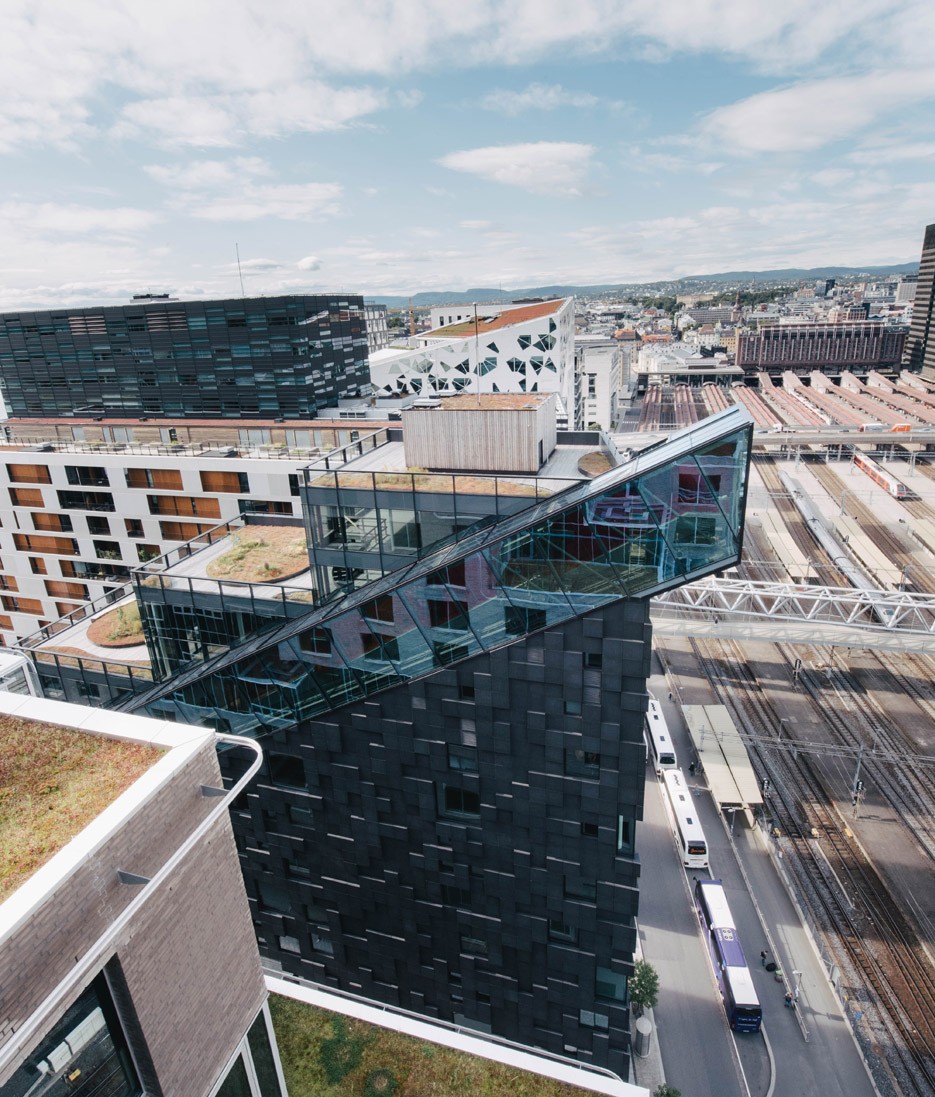 Designed to looks like a giant staircase, this Oslo office block by Dark Arkitekter completes the trio of buildings housing the headquarters of DNB Bank, created in collaboration with MVRDV and A-Lab (+ slideshow).

The West Building, also known as Bygg C forms part of the Barcode Project – a major new high-rise development on former dock and industrial land on the waterfront of the Norwegian capital.

It stands alongside the pixellated brick Bygg A by Dutch firm MVRDV, and the hollow-centred Bygg B by Norwegian firm A-Lab – which were all commissioned by DNB at the same time.

This building is 15 storeys high and features a stepped profile that make it look like a huge set of stairs. This form allowed Oslo-based Dark Arkitekter to create both double-height rooms and a series of roof terraces for staff.

“The 15-storey office building resembles a giant stair, in which each tread is a large roof terrace and each riser is a two-storey-tall glazed common room,” explained the studio.

“The extensively planted rooftops retain water while also providing employees with contemplative break spaces that look towards the east and south,” it added.

The building contains just under 12,000 square metres, with office space for up to 600 employees. Like its neighbours, it features a facade that appears to be pixellated – made up of square panels of black granite.

These black squares are interspersed with windows. These are also square, but are either four or nine times as big.

An elevator extends diagonally across the southeast wall, providing direct access to a penthouse restaurant offering views towards the Ekeberg hillside to the east and the Oslo fjord to the south.

The rest of the building is planned in a similar way to the other two buildings in the trio – cellular offices open out to larger break-out spaces, allowing for a flexible variety of layouts.

Shops and cafes occupy the ground floor level, while a subterranean level connects the West Building with the other two DNB buildings. This area contains a variety of facilities including meeting rooms and a staff canteen.

There are 11 buildings in total in the Barcode Project. As well as DNB’s three blocks, there is also a second building by Dark Arkitekter and a glacier-inspired structure by Snøhetta.

The project has come under fire by both architects and local residents for its scale. Local press has described it as one of the most protested projects in the city’s history.

It is located next to the Snøhetta-designed Oslo Opera House, which was awarded the European Union Prize for Contemporary Architecture in 2009.

Photography is by Jiri Havran, unless otherwise stated.