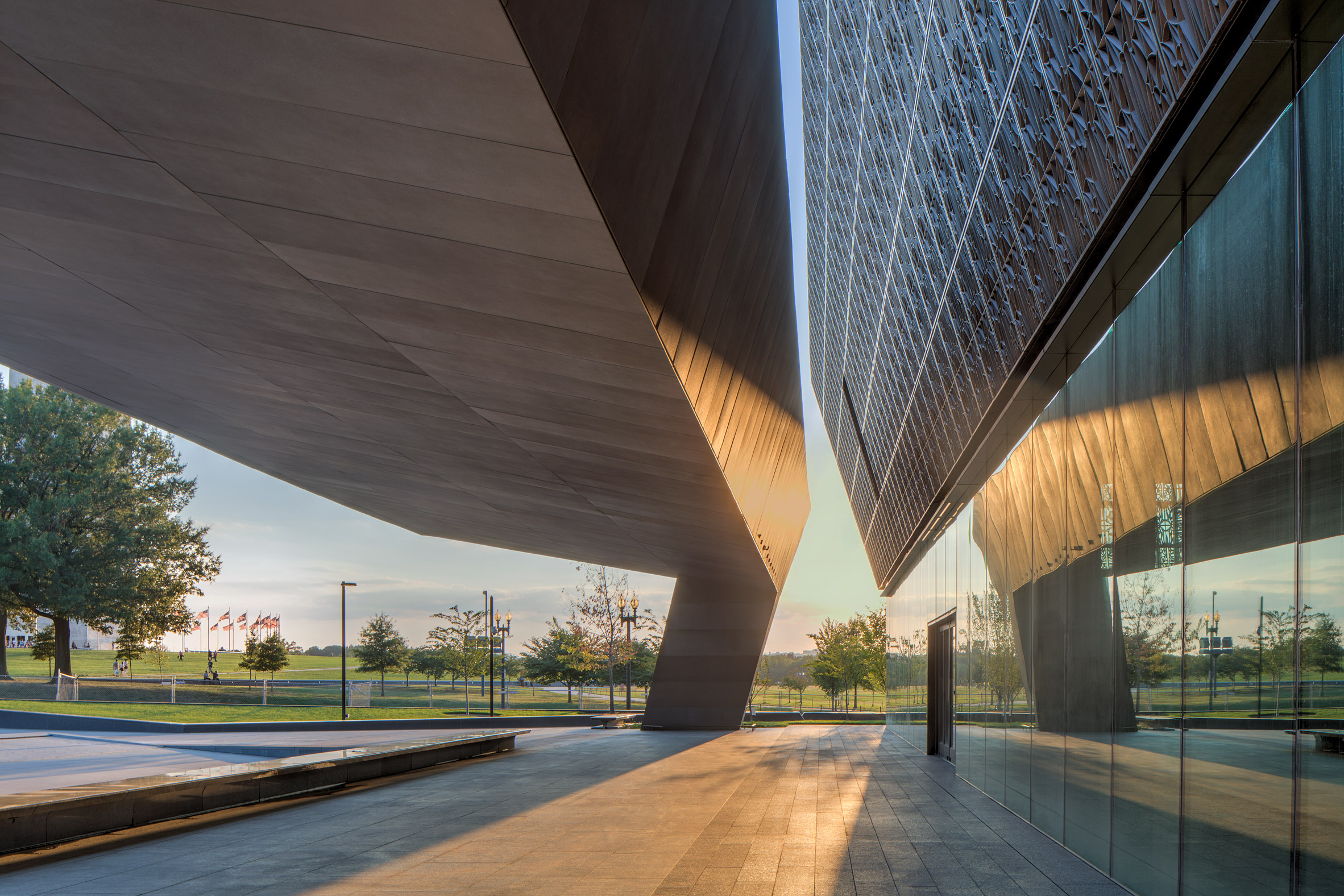 The museum – often referred to as NMAAHC – was designed by British architect David Adjaye in collaboration with US firms The Freelon Group, Davis Brody Bond and SmithGroupJJR, while exhibitions were designed by Ralph Applebaum Associates.

Encompassing 313,000 square feet (29,000 square metres), the building was constructed on the last remaining parcel on the National Mall, which contains a number of significant museums and memorials.

The building features a three-tiered exterior inspired by the Yoruban caryatid, a traditional West African carved figure with a crown. An example is on view within the museum.

Glazed facades are covered with latticework comprising 3,600 cast-aluminium panels. The screen’s patterning references the historical patterns created by African-American ironworkers in the South.

The brise-soleil’s colour changes throughout the day, appearing copper-hued in sunlight and considerably darker in the evening.

At the base of the building, the architects left the glass exposed. The upper portion is also left unobstructed, enabling views of the city.

The main entrance is located beneath a canopy that gestures toward the nearby Washington Monument.

Inside, the building contains galleries, an education centre and an auditorium, along with a cafeteria, store and offices. More than half of the museum is situated below ground.

Exhibits focused on slavery and freedom are situated in below-grade spaces, where visitors are meant to begin their tour. Presented on upper floors is material related to pop culture, music, sports and the visual arts.

The Contemplative Court comprises an oculus and cylindrical waterfall, which flows down into a reflection pond that is lined on two sides with stone benches.

In a 350-seat theatre, the team lined walls with wood panelling and perforated plates that mimic the exterior cladding. Outside the theatre, a sinuous staircase floats in a triple-height space, leading upstairs.

The building is meant to honour the social, economic and cultural contributions of African Americans. Artifacts on view include log cabins, cars, statues, clothing and film memorabilia.

Adjaye and the team of architects, known collectively as FAB, won the competition to design the museum in 2009. The project was captured by Instagram users in the run-up to its completion.

“There were so many attacks on our design that it felt like a bloodbath at times,” Adjaye said in an interview. “But we ended up with a building that’s got 90 per cent of what we wanted, which for architecture is pretty damn great.”

Adjaye’s other projects in the US include the Sugar Hill housing complex in New York’s Harlem neighbourhood, and a red-concrete art museum planned for San Antonio, Texas. He ranked at number 41 in the inaugural Dezeen Hot List.

Photography is by Brad Feinknopf.