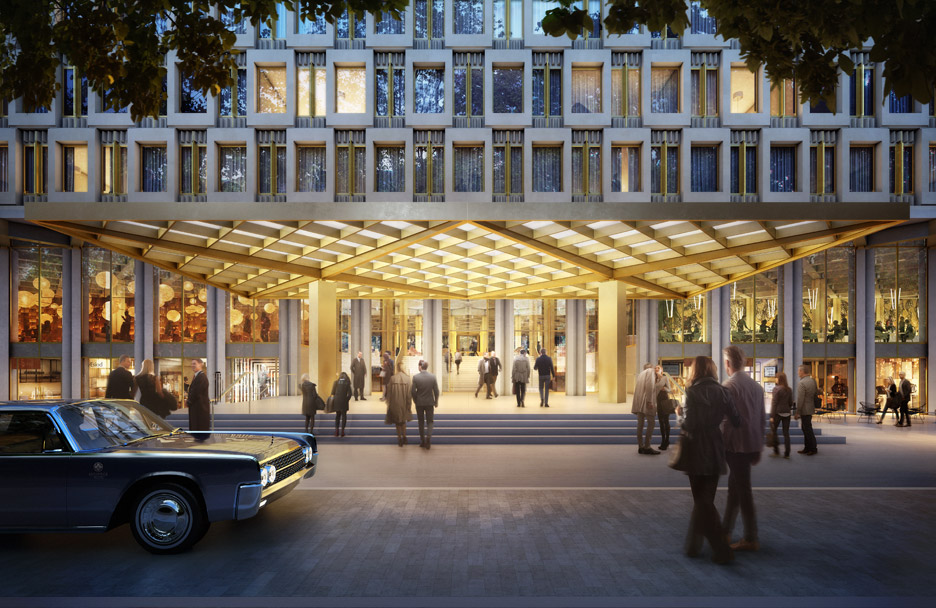 Architect David Chipperfield has released details of his plans for the Eero Saarinen-designed US Embassy in London, which his firm will convert into a 137-room hotel.

With the embassy set to move to a new home in Nine Elms, the Chancery Building at 30 Grosvenor Square will be completely transformed into a hotel with five restaurants, six shops, a spa and a ballroom.

David Chipperfield Architects was appointed to the project by developer Qatari Diar, from a shortlist that reportedly included Foster + Partners and KPF.

The London-based firm will retain the iconic stone facades of the building, which was designed by Finnish-American architect Eero Saarinen in the 1950s and was granted a Grade-II listing by English Heritage in 2009.

The gilded aluminium bald eagle that crowns the building will also remain in place.

“Our design proposals protect and respect the significant architectural and structural characteristics of Eero Saarinen’s design, with a focus on restoring and enhancing this unique building to secure its long-term future at the heart of Mayfair,” said David Chipperfield.

“We have studied the building’s design and its history as well as its surroundings to deliver an architecturally and socially coherent proposal, which will transform this purpose-built embassy into a world-class hotel.”

Completed in 1960, the Chancery Building was Britain’s first purpose-built embassy. Saarinen worked on the building while he was designing the JFK airport terminal in New York, which is also now being converted into a hotel.

English Heritage describes the Chancery Building as having “strongly articulated design and dynamic facades, well-detailed stonework and consistency of detail”.

For security purposes, the building is currently surrounded by bollards and barricades. But these will all be removed as part of Chipperfield’s proposals, to create more usable public space.

“This proposal presents a unique opportunity to create a vibrant and dramatically transformed public realm in this part of Mayfair,” said Lucy Musgrave of Publica, the public realm consultant on the project.

“It will also greatly improve the setting of the listed embassy building, and democratise and upgrade all four surrounding streets in a high-quality and sympathetic way,” she added.

The proposals will be presented in a public exhibition next week at 24 Grosvenor Hill, ahead of a planning application scheduled for May.

Embassy staff are expected to move into the new KieranTimberlake-designed embassy in 2017, allowing work on the hotel to start any time after that.

David Chipperfield is best known for projects including the Neues Museum in Berlin and the Hepworth Wakefield gallery in northern England. His recent projects in London also include a house for artist Tracey Emin and a revamp of the Royal Academy of Arts.