David Chipperfield scales back plans for Nobel Center in Stockholm 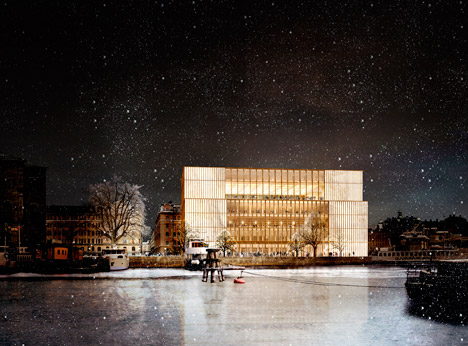 David Chipperfield has “significantly reduced” the size of his proposed Nobel Center in the Swedish capital in response to concerns from the public (+ slideshow).

Following consultations with local residents and stakeholders, the British architect has altered the size and proportions of his competition-winning design for a new home for the Nobel Prize to better integrate it with its setting.

In a statement, David Chipperfield Architects said: “While the fundamental concept of the ‘Nobelhuset’ remains the same, the building has been reduced significantly in size.”

“The modified design integrates the Nobel Center even better in its urban context and establishes a lively interaction with the citizens and visitors of Stockholm.”

Chipperfield – known for projects including the Hepworth Wakefield gallery in northern England and the Neues Museum in Berlin – was selected to design the cultural centre in April 2o14. His vision is for a shimmering brass-clad building on the Stockholm waterfront, featuring a glazed facade that opens out to a new city park.

Objections to the building’s size have since been raised by Rasmus Jonlund, a Liberal politician and vice chairman of the city council’s cultural environment committee, and the Stockholm City Museum, as reported by The Independent newspaper earlier this year.

At the time, Chipperfield told Dezeen the objections were minor issues and rebuffed any suggestions that the project might not go ahead.

His firm has now reduced the building’s height by three metres and shorten its length by 4.5 metres. The team also plans to give clearer definition to the building’s base, middle and upper level – taking cues from existing local architecture.

“To us it has been important to listen to the opinions that have been presented,” he said. “We are satisfied with the solutions that David Chipperfield Architects has developed. Even though the building will now be smaller, it will be possible to create the broad range of activities we have envisioned that are related to the Nobel Prize and the achievements of the laureates.”

Plans for an underground car park have been scrapped, allowing more room for street-level public space. There will now also be a 200-square-metre public terrace on the roof, including a bar area that can be used for television broadcasts.

The auditorium design was revised to make it more flexible. The space will now provide an “elegant setting” for award ceremonies, public meetings and lectures, and scientific conferences, according to the organisers.

The Nobel Center is scheduled for inauguration in 2019, creating a year-round exhibition centre and events venue for the award that recognises advances in science and culture.

The post David Chipperfield scales back plans for Nobel Center in Stockholm appeared first on Dezeen.