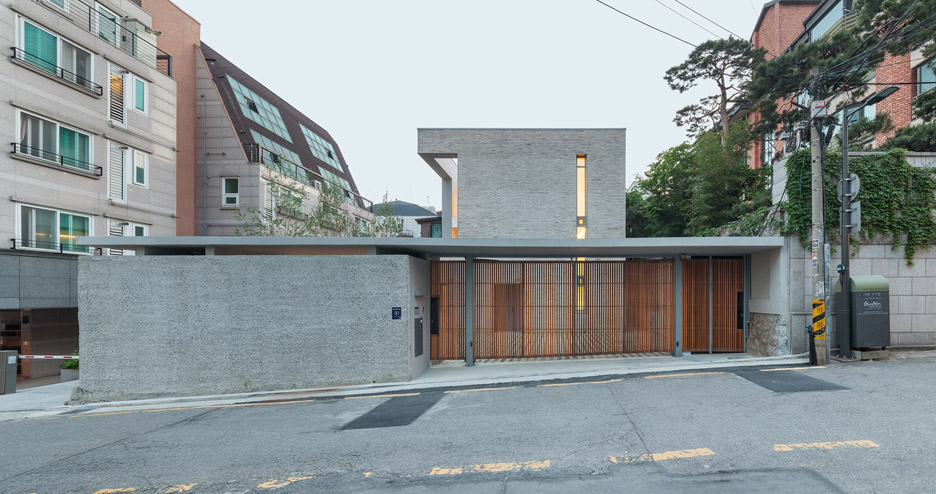 Cutaways in the brick facade of this family home by Seoul studio OBBA provide views over a small walled garden in the city’s high-density Gangnam neighbourhood (+ slideshow).

The local practice was approached by a client who wanted to replace his childhood home with a new house for his family on the same site.

The area’s accelerating land values has led to the replacement of many family residences with large speculative housing schemes and the site is now overlooked by a group of five-storey blocks.

“The project began as a reaction to the changing urban environment, trying to conserve the existing values of the house,” explained the architects. “Such context led us to think of a new kind of single-family home typology.”

“The client has been living in the house for his entire life, and wished to honour the will of his mother not to leave the place that has precious memories of,” they added.

Related story: House in Seoul by OBBA features a retractable staircase and a loft for cats

“They decided to demolish the decrepit house and build a new home in the same place for his family to live together.”

The surrounding developments created concerns about privacy, so OBBA created a new three-storey residence made from reinforced concrete and brick that has just a few windows.

A two-storey window cut into one corner of the brick facade spans the first and second floors, bringing a good supply of light and ventilation into the living room and a study.

A second deep columnar window was introduced to light the pale grey staircase that connects the three floors. This arrangement inspired the project name, Open and Closed.

Inside, the 250-square-metre house is divided into three zones to give the client’s own family and his mother separate living quarters.

The mother has her bedroom at ground level with easy access to the walled garden, while a shared wood-lined lounge, dining room and kitchen are set on the first floor and the son’s family have their own space on the second floor.

Some of Gangnam’s other recent developments include a block with a step-shaped facade by Sae Min Oh and a hybrid housing and office project by Julien De Smedt.

OBBA – Office for Beyond Boundaries Architecture – was founded by Sojung Lee and Sangjoon Kwak in 2012. Among the studio’s previous projects is an apartment block with perforated brickwork in Seoul’s Naebalsan-dong neighbourhood and a house with a feline-sized staircase for a pair of cat-lovers.

Photography is by Kyungsub Shin.