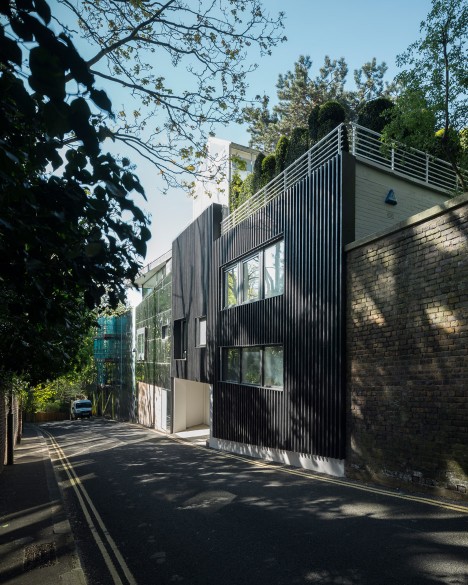 Charred larch slats now cover the exterior of this Modernist house in north London, thanks to a “macabre” upgrade intended by architecture studio Denizen Works to reference the nearby Highgate Cemetery (+ slideshow)

The aim was to help it fit in with its impressive new neighbours – Eldridge Smerrin’s RIBA award winning Glass House and Invisible House by Dominic Mckenzie Architects, which was winner of the Sunday Times Home of the Year 2014.

The team chose to re-clad the building in blackened wood as a reference to Highgate Cemetery, which it backs onto.

“Our clients had a clear interest in the cemetery – the plants on the roof terrace have been cut to look like tombstones and they had named the house Valhalla – and we used this as a driver for the conceptual approach,” explained project architect Andrew Ingham.

“This wood, as dead as we could make it, reflects our clients interest in the macabre,” he added.

“In charring the larch, the surface bears the act of a trauma, but in a very beautiful way.”

The wood was charred using the Japanese technique called Shou Sugi Ban. The process prolongs the life of the wood, and makes it more resistant to fire, insect attack and decay.

It is a technique that is becoming increasingly popular in London, with other recent examples including a pair of extensions to a terraced house in Hackney and a garden studio in Camden.

The burnt wood offers a contrast to the facades of the reflective stainless-steel walls of Invisible House, which reflects the trees in Waterlowe Park opposite, and the granite exterior of Glass House.

“As something which is experienced most powerfully from the street, the project is an act of urban generosity, and completes a triptych of striking designs,” studio architect Andrew Ingham told Dezeen.

As the existing wall is staggered, two different depths of wood were added to create a single continuous surface.

“When viewed from up and down the street, the elevation appears closed, but on moving past the house the differing depths of fins reveal the ghost of the original articulation of the dwelling behind,” said Ingham.

The fins are fixed in place by steel top-hat brackets and glue. They add just 320 millimetres depth to the wall.

The project also involved the addition of new aluminium-clad window sills, which increase the depth of these existing openings. The old frames were then painted dark grey to match.

Denizen Works was founded by architect Murray Kerr in 2011. Other completed projects by the firm include a light-filled kitchen added to a London house, an overhauled cottage in Scotland’s Outer Hebrides and a wooden sauna on a Finnish island.