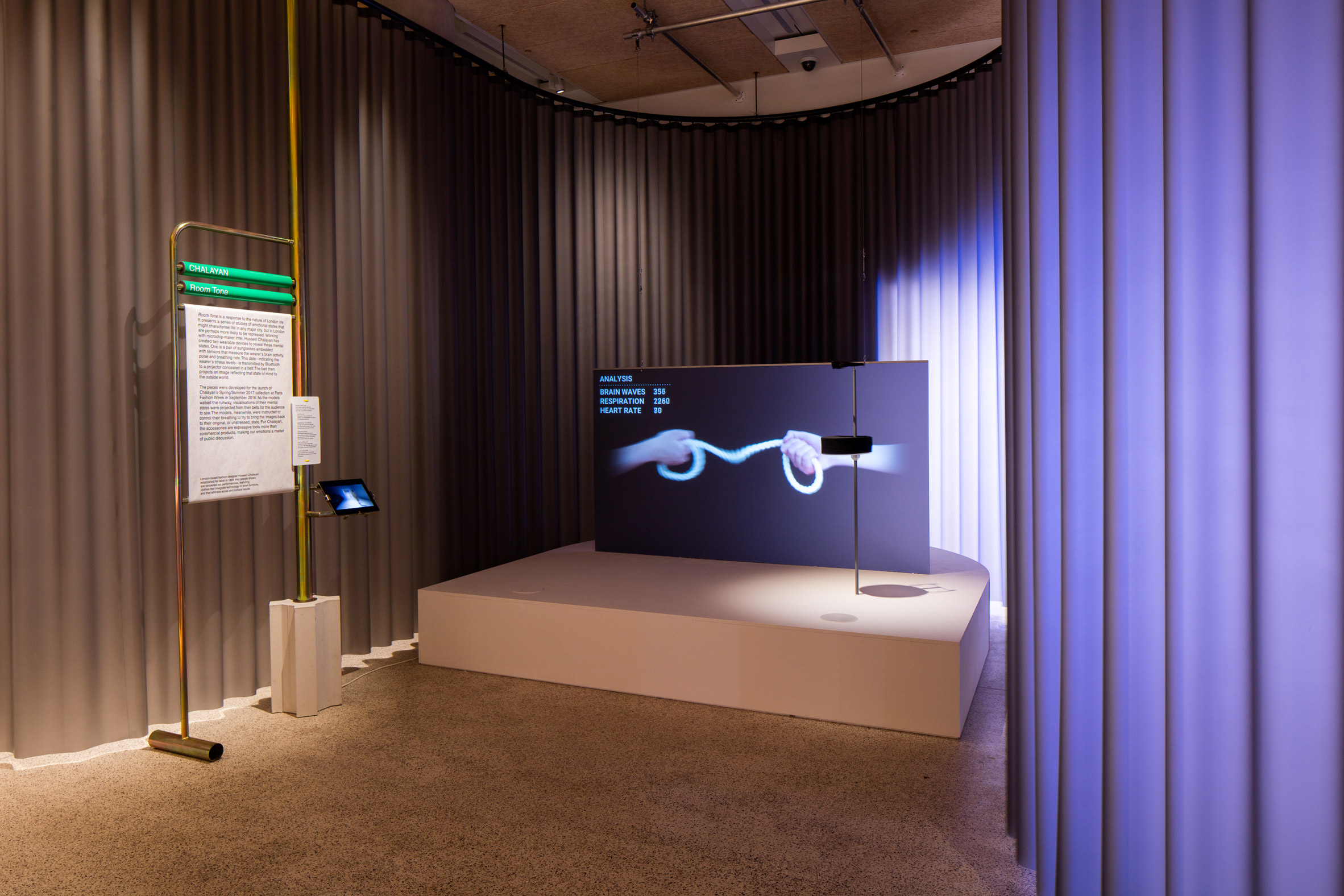 The first exhibition to take place in London’s new Design Museum explores a spectrum of issues that define our time, with installations by OMA, Hussein Chalayan and Neri Oxman.

The Fear and Love exhibition presents 11 installations by 11 different architects and designers, who each confronted a different issue shaping today’s world.

It’s the first exhibition to be held in the Design Museum’s new South Kensington location, opening to the public on 24 November 2016.

The museum‘s new home is in the former Commonwealth Institute, a 1960s building on Kensington High Street that has been renovated by architectural designer John Pawson.

“When the Design Museum opened in 1989, the first exhibition, Commerce and Culture, was about the value of industrial products,” said chief curator and Dezeen columnist Justin McGuirk.

“Three decades later, we now take that value for granted. Fear and Love goes further, and proposes that design is implicated in wider issues that reflect the state of the world.”

Among the issues explored by the 11 exhibitors are networked sexuality, sentient robots, slow fashion and settled nomads.

Following the Brexit vote earlier this year, architecture firm OMA presents the Pan-European Living Room, which is furnished with a piece of design from each of the 28 EU member countries.

The centrepiece of the room is a gigantic, striped blind, which the firm originally designed in 2001 as a flag for the EU.

Fashion designer Chalayan explores the anxieties experienced by those living in cities, including the fear of terrorist attacks, and sexual desires.

He presents two wearable devices that he originally created for his spring summer 2017 show in September – a pair of sunglasses and a belt.

The sunglasses are embedded with sensors that measure brain activity, pulse and breathing rate. This data is then transmitted to a projector embedded in a belt, which casts a visual representation of the wearer’s emotions for the outside world to see.

A second fashion designer, Ma Ke, is showing her ongoing project Wuyong, in which she rejects consumerism and “fast fashion” by treating her creations as works of art.

Calling upon our fears and anxieties surrounding artificial intelligence, multidisciplinary designer Madeline Gannon created Mimus – a 1200-kilogram industrial robot that can sense and respond to visitors’ presence from within its enclosure.

In the centre of the room, Japanese graphic designer and Muji art director Kenya Hara has created a display of simple photographs that focus on staple foods around the world.

A secluded room displays the work of architect Andrés Jaque, who has created an audiovisual installation named Intimate Strangers.

Inside, a series of screens present four short films each discussing the way our pursuit for sex and love on apps and social media networks is changing the way we view the city, our bodies and our identity.

Towards the back of the exhibition, Arquitectura Expandida – an activist architecture collective from Colombia – has installed a replica of a school it designed and built in one of the most disadvantaged communities of Bogota.

Oxman is exhibiting a series of 3D-printed death masks, included one created for musician Björk.

Hong Kong-based Rural Urban Framework explores how the nomads of Mongolia are adapting to urban life, while Amsterdam graphic designers Metahaven present a film about the marine wildlife conservation group Sea Shepherd accompanied by a series of colourful graphic flags.

The Fear and Love exhibition was designed by Sam Jacob and is located on the ground floor of the new Design Museum. It is open until 23 April 2017.

In a press conference today, museum director Deyan Sudjic revealed that upcoming exhibitions would include a show about the significance of California post-Charles and Ray Eames, a colour exhibit curated by Hella Jongerius, and an anniversary of the Russian revolution.