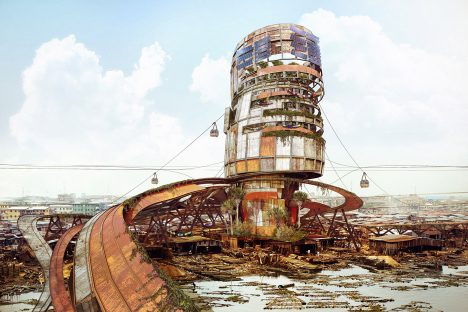 Designer Lekan Jeyif has created a dystopian vision of shanty-town towers in Lagos, Nigeria, to highlight the poor standard of living in the city’s impoverished areas (+ slideshow).

Entitled Shanty Megastructures, the designs transform shanty dwellings into sleek high-rise towers in the centre of Lagos – Nigeria’s largest city, and the location of its main industrial and commercial activities.

Nigerian-born Lekan Jeyifo, who is based in New York, wanted to draw attention to the poor standard of living within the deprived settlements by moving them into the centre of the city.

“The dispossessed are given prominence and visibility, albeit through a somewhat dystopian vision, which highlights that these communities often suffer from a lack of appropriate sanitation, electricity, medical services, and modern communications,” he said.

Jeyifo’s images feature grand cylindrical towers comprised of a patchwork of materials, including corrugated metal and sheets of plastic.

The structures are linked by a rollercoaster-like network of looping walkways. These are raised above deadlock traffic and planted with greenery, while waterways underneath suggest transportation by canoe.

“Shanty town” is the name often given to improvised housing developments on the outskirts of cities. These areas often have no access to basic infrastructure, including clean drinking water, electricity and waste disposal.

Lagos’ shanty town is located in the Makoko district, which is on a lagoon on the edge of the Atlantic Ocean, and is where architect Kunlé Adeyemi built his controversial floating school.

Parts of the towns have been destroyed by the government to make space for private sector developments – another issue that Jeyifo wanted to raise.

“It’s a conversation about how slums are frequently viewed as unsightly eyesores to be bull-dozed, leaving their inhabitants completely displaced,” the designed explained.

“This is a standard practice that occurs from Chicago to Rio de Janiero, and throughout the world.”