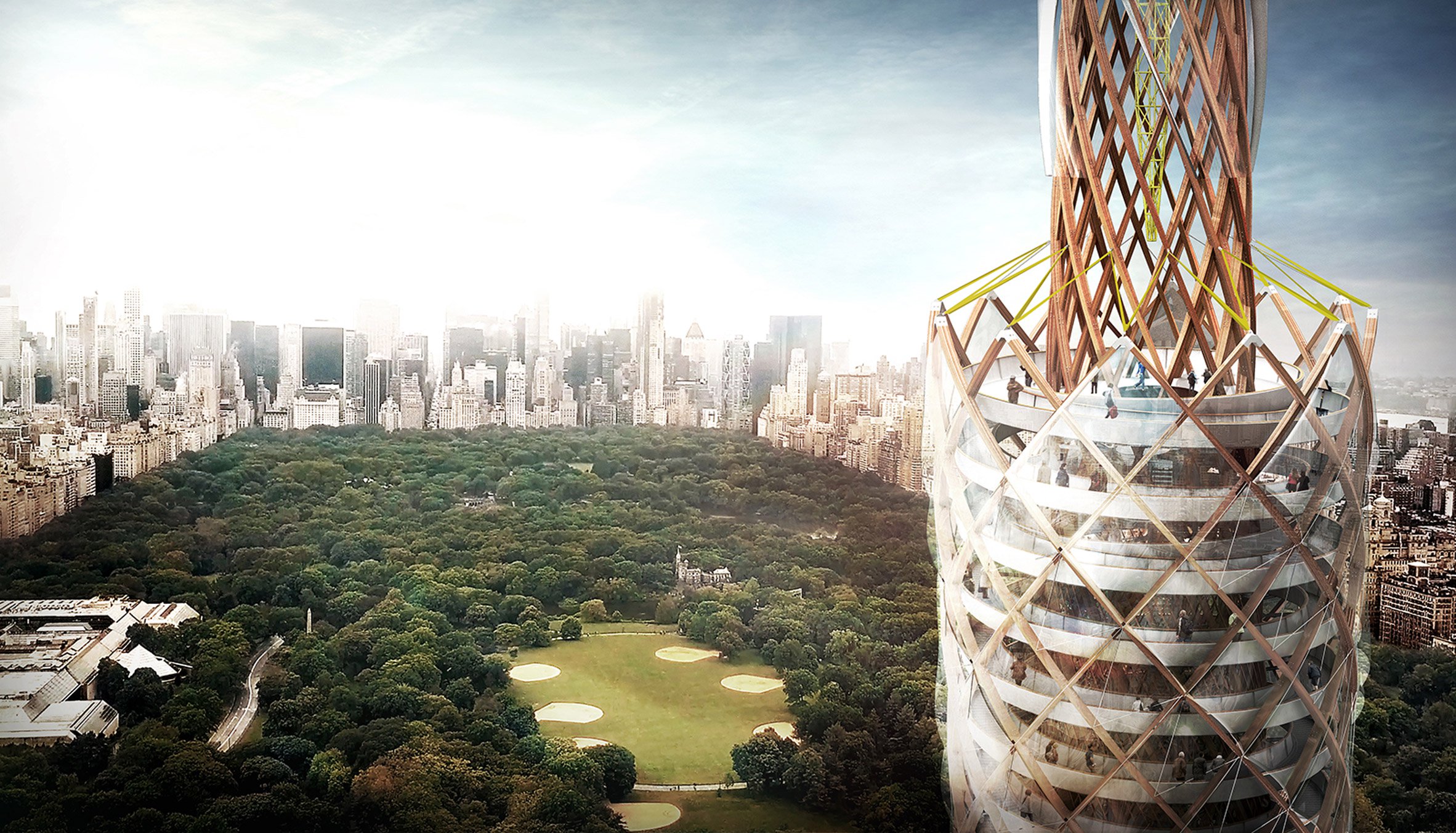 New York studio DFA has envisioned a prefabricated timber tower for New York’s Central Park that would both filter a contaminated reservoir and provide views over the city.

The temporary 712-foot-tall (220-metre) Central Park Tower would sit in the Jacqueline Kennedy Onassis Reservoir, a 106-acre man-made lake that encompasses one-eighth of the park’s area and contains one billion gallons of contaminated water.

“Aside from supplying water to the pool and Harlem Meer, the Reservoir sits stagnant and fenced off due to its current state as a health threat to millions of New Yorkers, tourists and animals,” said DFA.

The firm’s concept imagines the structure would contain a filtration system in its base, which would turn the hazardous reservoir into a useable pond.

It would also provide a series of ring-shaped viewing platforms on its upper levels, creating a tourist attraction to be used during the clean-up process.

“DFA envisions a temporary landmark that is remarkably of its time to creatively transform the reservoir into one of New York’s boldest urban amenities,” said studio founder Laith Sayigh.

“This conceptual project pushes the boundaries of what we perceive is possible in a city as dense, historic and environmentally vulnerable as ours.”

The tower would be constructed from a lattice of curved glue-laminated timber beams, which would be manufactured off site and assembled in less than six months.

Tensile steel cables would be anchored to the pre-cast concrete base to aid stability. The tower’s main body would be formed by a pair of helix structures, with a ramp in between the two layers from the 375- to 500-foot (114- to 152-metre) height marks.

Covered with a transparent material, its outer skin is designed to be more porous than the inner core. This would allow visitors to take in the views as they spiral up the ramp, culminating at the 360-degree viewing platform.

A wind turbine at the top would generate power for the filtration system and the elevators to the observation decks. Crowned with a 112-foot-tall spire that doubles as a lighting rod, the tower would become the world’s tallest timber structure if it was built.

“The Central Park Tower has the potential to be a model project for other cities aiming to fix existing infrastructure, build tall to capture views and elevate the urban public realm,” Sayigh said.

Central Park is the most visited urban park in the US. Designed by landscape architect Frederick Law Olmsted and architect Calvert Vaux, it was established in 1857 and completed at its current 843-acre (341-hectare) size in 1873.

Today, a host of supertall skyscrapers are popping up close to the park’s southern end, which New Yorkers say are casting shadows over its green spaces.