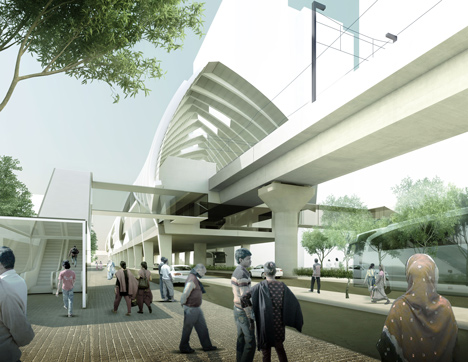 News: British architecture firm John McAslan + Partners has won an international competition to design a new metro line for Dhaka, which will stretch 12 miles across the city.

John McAslan + Partners will design sixteen elevated stations for the over-head line, which is part of a $3 billion (£2 billion) project to improve infrastructure in Dhaka, Bangladesh.

The Dhaka metro line will form a commuter link between the capital’s residential district in the north of the city and the business centre in the south.

Plans for the metro line show elevated train tracks supported on a series of piloti.

White perforated canopies arch over the tracks to let trains pass through the middle and provide cover for the station platforms.

The canopies are perforated with a geometric pattern reminiscent of Islamic tile designs that allows sunlight to pass through the tunnel-like structures to illuminate the platforms below. An irregular bowed framework supports the cut-out roof.

White elevator shafts and stairwells connect the station platforms to the ground.

The project, which also includes the design for a train depot, is part of a larger development scheme proposed by the Dhaka Mass Transit Company that aims to address growing traffic congestion and air pollution issues.

“The line will form connections between areas of Dhaka in support of the wider urban strategy of decentralisation of urban activities and population from the centre to satellite communities,” said a statement from John McAslan + Partners.

The Dhaka metro line will be completed in three stages with all stations operational by 2022, and is forecast to serve over 500,000 passengers daily by 2025.

The studio will work in collaboration with local architecture firms to integrate the new stations into the urban setting.

John McAslan + Partners has worked on a number of infrastructure projects, including the Anand Vihar transport hub in New Delhi and the redevelopment of Kings Cross station in London.