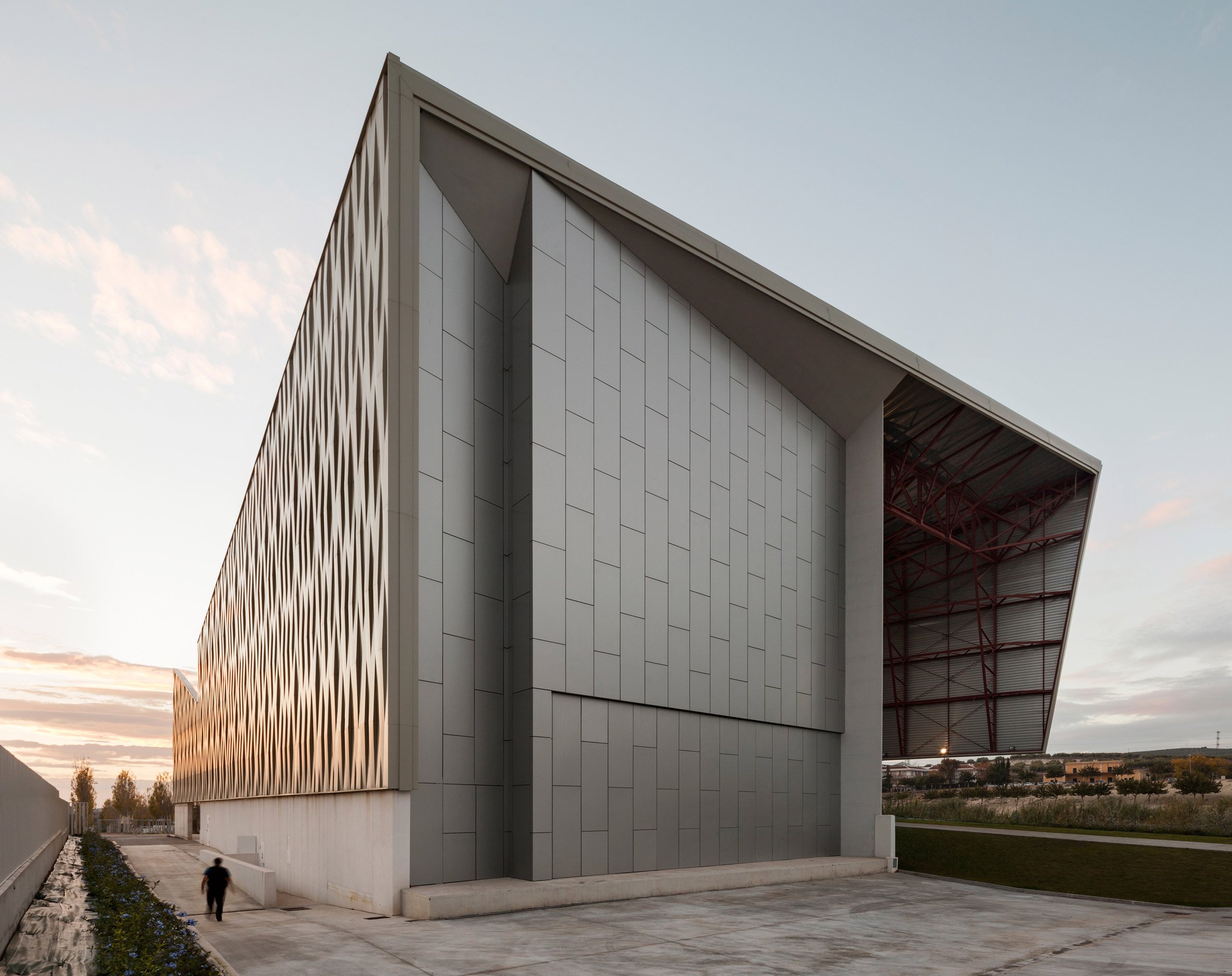 A huge canopy extends from one side of this auditorium in the Spanish province of Córdoba and folds over a riverside terrace, encouraging visitors to loiter around before and after performances.

Barcelona-based MX_SI Architects designed the Municipal Auditorium to host performances and exhibitions in the town of Lucena. The architects’ aim was to create a series of indoor and outdoor spaces that have flexible uses, and provide a connection with the town’s Lucena River.

The main auditorium is contained within a rectangular structure with a mono-pitched roof.

The angular roof covers a ramped pathway that runs parallel to the river and hosts restaurant seating, exhibition spaces and a large terrace-cum-foyer area at the end.

The structure is covered with undulating strips of aluminium and supported by a red metal framework.

“The walk along the river provides a spatial sequence based on different gradients of open, semi-covered, covered and enclosed spaces,” said the architects. “A large space or open forum is created for crowds to congregate at concerts and outdoor events.”

“Access to the building is via a ramp with a porch overhang recreating a foyer terrace to enjoy the views of the river and generates a cool, shaded microclimate that encourages not only the auditorium public to stay, but those from the city as well,” they added.

A broad door is camouflaged at one end of the auditorium and opens onto a further terrace that can be used to host open-air performances during fair weather.

The construction of the building was started before the 2008 financial crash, resulting in a cut to the project’s budget.

The architects were forced to split the completion of the building into phases, and to adapt the design to be be more time and cost efficient.

Phase one saw the completion of the four-storey building, but the finishing of only two of its floors. The house the main elements such as the stage, dressing rooms and storage areas.

The second phase will see the addition of a conference room, press area, gallery, as well as boxes and an amphitheatre.

The building’s undulating cladding is made up of a series of aluminium sections – a technique selected to be quick and easy to assemble, and to therefore cut the cost of construction.

Inside, the auditorium has a dark spot-lit ceiling and orange walls, while the exhibition space features glossy white floors and a roof that angles up to a wall of glazing.

The Municipal Auditorium for Lucena is one of many buildings forced to adapt its design in the midst of Spain’s financial crisis.

The Spanish pavilion at the Venice Biennale – which was awarded the Golden Lion for best pavilion – highlighted 55 projects offering a radical response to building in Spain after the economic crisis. Among the projects on show were a converted palace and an adaptable apartment.

Photography is by Pedro Pegenaute.