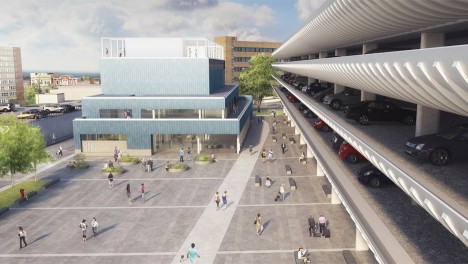 John Puttick Associates has significantly revised its designs for a new youth centre at Preston Bus Station, a transport hub in northern England that has become an icon of Brutalist architecture (+ slideshow).

The New York firm led by British architect John Puttick won an RIBA-organised competition in 2015 to overhaul the station and add a new youth centre in its grounds.

But it has now revealed new plans for the 2,600-square-metre Youth Zone building, which is to contain cultural and sports facilities, including a rooftop football pitch.

The combination of curving and linear walls in the original entry has been replaced with a stepped formation intended to be more in keeping with the 1960s structure, which features tiers of scooped concrete bays.

“It has also been important to respond to the proudly utilitarian quality of Preston Bus Station by designing a new neighbour that shares and celebrates this robustness, just a youth centre used for sport and as a place for creativity should do,” said John Puttick of his new plans.

“From a technical and cost perspective, the new solution is less complex and more affordable.”

While original plans show the youth centre affixed to one side of the heritage-listed station building, the revised scheme will function as a standalone building to the west of the station. This will allow its operator, OnSide, to run the building independently.

The timber-clad base has been replaced with a glazed entrance hall and colonnades, intended to frame snippets of activity within the building, while the terraced formation is designed to preserve sight lines to the station.

“The Youth Zone’s relationship to Preston Bus Station is very much in keeping with the original BDP strategy of a family of satellite structures including the vehicular ramps and taxi rank,” said John Puttick Associates.

“The society commends the team’s attention to detail in the bus station refurbishment and careful consideration of the impact of the new Youth Zone on the setting of the listed building,” added Claire Price of the Twentieth Century Society.

The firm will also restore Preston Bus Centre itself, which was completed in 1969 by Keith Ingham and Charles Wilson of architecture firm BDP.

The station was threatened with demolition in 2013, before winning a protracted listing battle backed by a host of architects including Richard Rogers and OMA. It is considered by many to be one of the UK’s most important examples of the Brutalist style.

John Puttick Associates saw off competition from four other teams in the contest. Its plans for the station also include reinstating its original interior colour palette and the reintroduction of signage in Helvetica typeface.

The firm is currently also shortlisted in another RIBA competition – the redevelopment of Tristan da Cunha, a remote inhabited island in the South Atlantic.