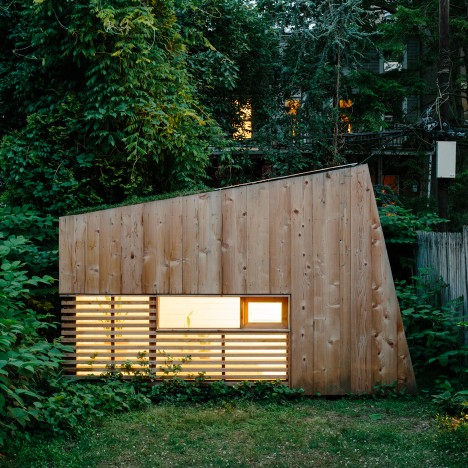 As real-estate prices in New York City continue to soar, Brooklyn residents are using their extra space and relaxed planning restrictions to extend their townhouses and build “quirky” garden studios, according to local architects (+ slideshow).

Increasing numbers of New Yorkers are moving from Manhattan to Brooklyn for more space for their money. Townhouses in the borough typically come with back yards, presenting an opportunity for homeowners to add value and square footage to their properties.

Just like in London, this has led to a boom in the market for residential extensions. But what is unique to Brooklyn – where creative employment has almost doubled over four years – is a new trend for building tiny shed-like shelters at the ends of plots as home workplaces or studios.

“This trend follows the fact that more and more people are self-employed or in tech,” said Brooklyn-based studio Architensions, which recently added a cedar-clad writers’ studio to a townhouse garden in Greenpoint. “This doesn’t necessarily require having a formal office or going to a co-share space.”

“It’s actually a dream being in New York and working from your own backyard,” they added.

Local architect Nick Hunt, who has built one of these micro studios at his own home, explained that buildings of a certain size don’t need to go through the same red tape as larger projects.

“If a structure is less than 100 square feet (9.3 square metres) and no higher than seven foot six inches (2.3 metres) it doesn’t require a building permit in NYC,” he told Dezeen. “It is thought of as a ‘storage shed’ or outbuilding.”

“This can really restrict a project or really inspire a quirky solution,” Hunt added.

His wooden structure features a sloped roof that rises to the maximum permissible height. Grass covers a portion of the top, while a large skylight illuminates the white-washed walls inside.

Hunt – who co-founded Hunt Architecture with his brother Andrew – rents his ground-floor apartment in the Boerum Hill neighbourhood, so asked his landlord’s permission to build the studio.

Another tiny writer’s studio by Elizabeth Roberts Architecture and Design is again built from wood, and has glass doors that open onto a veranda covered by the projecting roof.

Many Brooklyn residents are also choosing to extend the backs of their properties during renovations, adding more space to the often compact townhouses.

An example is Brooklyn-based studio Barker Freeman Design Office’s two-storey extension to a 12-foot-wide (3.6 metres) row house, which was gutted to create an open living space that feels expansive despite the narrow dimensions.

“Most of the projects I see are new homeowners who purchase a property because they already know they can add square footage,” partner Alexandra Barker told Dezeen.

Barker Freeman‘s design features expanses of glass overlooking the garden, which Barker said is typical of extension projects in the area.

“Often the extensions are built with large amounts of glazing on the rear facade to maximise the penetration of light into the interior of the building,” she said. “They are often more modern and they are often where new family rooms or master suites are located.”

After Architensions completed the writers’ studio, the firm was asked to return to the home and embark on a similar project enlarging the main townhouse. The architects added two boxy volumes, clad in charred wood to match the garden structure, each with different functions – one houses a kitchen and the other an entertainment space.

“The majority of townhouse owners are renting out one or two floors to pay for mortgages and maintenance, making their own living space less flexible and smaller,” the studio said. “Hence they like at some point to expand their own space.”

As with the micro studios, planning laws for extensions are fairly relaxed and consent is easy to obtain, providing building codes are met.

“It is relatively easy if a house has a typical lot and is not in a landmark zone,” said Barker.

The architects agree that many homeowners view extending as a much more favourable option than moving to new-build properties, which lack the character of the older townhouses.

“These houses are very charming, and very well inserted into a refined urban fabric usually historic districts, and also well built,” said Architensions. “Compared to the wild real-estate that is producing bad examples of architecture and construction these days in New York, people would rather stay instead of moving.”

“These projects are popular because people in New York are always trying to find unique ways to live in the city,” said Hunt. “Additions, outbuildings, backyard shacks all allow a freedom to customise the way you live that renting an apartment in a ubiquitous walk-up or elevator building doesn’t.”

“New York can be an impersonal place at times, and everyone is trying to make their mark,” he added. “These projects can be an accessible way to do it.”

The post “Dream of working from your own backyard in New York” fuels Brooklyn garden studio trend appeared first on Dezeen.