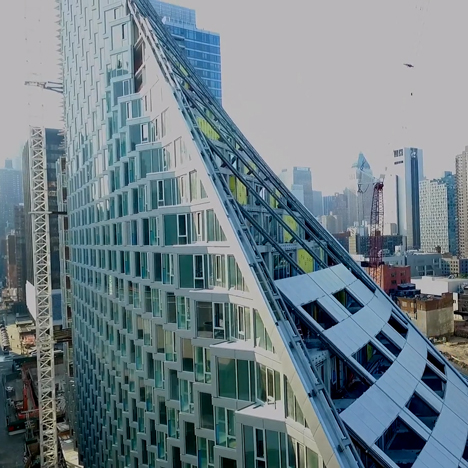 Communications firm Darkhorse has used a camera mounted to a drone to capture footage of Via 57 West, the residential building by Bjarke Ingels Group that is now rising in New York (+ movie).

Construction is underway on the tetrahedron-shaped building, which is located on West 57th Street in Midtown Manhattan. The design is pulled up at one corner, to create a 467-foot-tall (142-metre) structure. It topped out several months ago, with the addition of the final structural beam, and work is now continuing on the building’s facades.

Once complete, it will be BIG‘s first building in North America. The Danish firm, which opened a New York office in 2010, is also designing Two World Trade Center in Lower Manhattan and the new Google headquarters in California, among other US projects.

The unofficial movie by Darkhorse shows images of Via’s sloped exterior, which is punctuated with south-facing terraces that look toward the Hudson River.

The project is being constructed in an area with a mix of building types. The pinnacle of the structure is on the north-east corner, with the building’s other corners relatively low to the ground.

“[The West 57th site] is sandwiched between a power plant, a sanitation garage and a highway. We thought, ‘What they really need is a courtyard.’ So we started by putting the courtyard on the site,” explained Ingels.

“But to give it Manhattan density we had to pull up the north-east corner, up to 500 feet, keeping all of the other sides low, so you still get the sun from the south and the west. You still get the views over the water.”

The building is scheduled to open in 2016.

Other residential projects now underway in New York include 152 Elizabeth Street by Tadao Ando in the Nolita neighbourhood, 520 West 28th Street by Zaha Hadid near the High Line, and a luxury condo building by Alvaro Siza that is slated to rise near BIG’s Via 57 West.