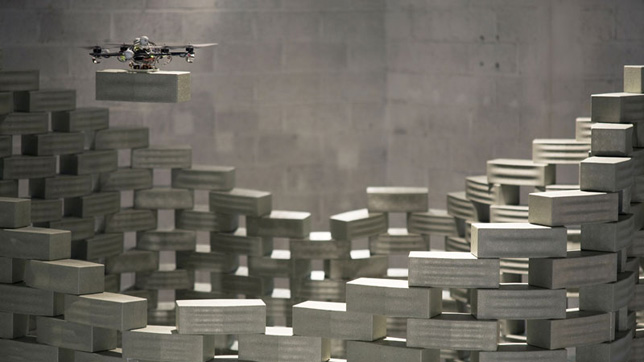 Dezeen and MINI Frontiers: architect and researcher Ammar Mirjan explains how drones could be programmed to construct buildings in the first of two movies about the use of unmanned aerial vehicles in architecture.
Flight Assembled Architecture by Gramazio & Kohler and Raffaello D’Andrea in collaboration with ETH Zürich. Copyright: François Lauginie
In 2012, Swiss architecture firm Gramazio Kohler Architects and roboticist Raffaello D’Andrea collaborated with ETH Zürich to program a fleet of drones to lift and stack thousands of polystyrene bricks at the FRAC Centre in Orléans, France.

“The project was called Flight Assembled Architecture” says Mirjan, who is part of Gramazio Kohler Architect’s research department at ETH Zürich. “For the first time we had flying machines building a differentiated structure made out of 1,500 elements. It [resulted in] a six metre-tall tower.”

Although the bricks had to be made from polystyrene to be light enough for the machines to lift, Mirjan says the project suggested how drones might be used to construct actual buildings in future.
“It showed that, on the one hand, these machines can collaborate to build structures,” he explains. “On the other hand, it showed that they can actually work on a building scale.”

Drones can be programmed just like an industrial robotic arm, but their greater freedom of movement means they can be used to build much taller and more complex structures.
“Flying machines are just an end effector, a hand in three-dimensional space,” Mirjan explains. “They operate according to the instructions that we send to them.”

Mirjan suggests that using drones to construct buildings in future could help streamline the construction process.
“In architecture, you spend a lot of time modelling something, often in 3D,” he says.”[Currently] we translate those into drawings and 2D plans, which are then interpreted by someone.”
“It’s a shame that we lose all the spacial information that we have in the 3D model. I think robots allow us to connect the two together and this can be a benefit for the whole process chain.”
Ammar Mirjan of Gramazio Kohler Research. Copyright: Dezeen
This movie was filmed in London at the Craft Council’s Make:Shift conference, where Mirjan was a keynote speaker.
The music in the movie is a track called Trash Digital by UK producer 800xL. Additional footage is courtesy of Gramazio Kohler Research.
Still photographs used in the story are by François Lauginie, unless otherwise stated.
Dezeen and MINI Frontiers is an ongoing collaboration with MINI exploring how design and technology are coming together to shape the future.

The post Drones can “collaborate to build architectural structures” appeared first on Dezeen.