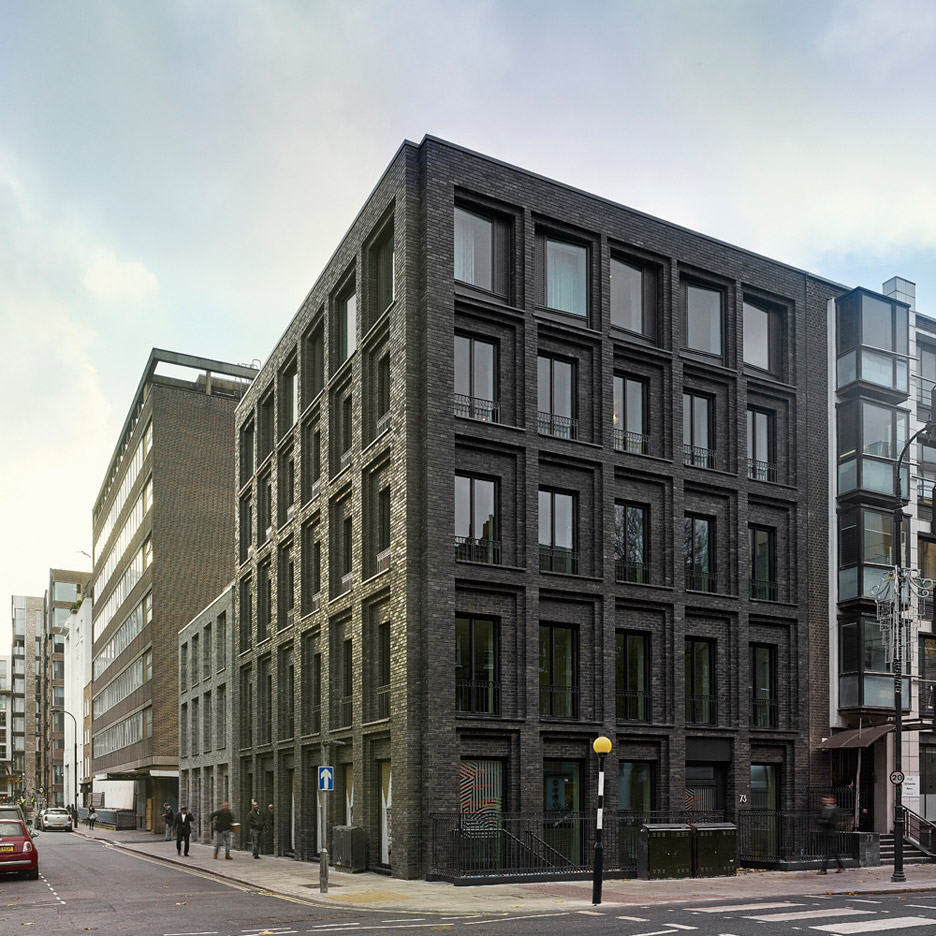 Architecture office DSDHA has completed an apartment block in London’s Fitzrovia, which has a pair of faceted glass penthouses concealed behind its austere grey brick facades.

London-based DSDHA – founded by architects Deborah Saunt and David Hills – was tasked with creating a mixed-use development on a busy street corner, with shops on the ground floor and 11 apartments above. They call the project Corner House.

The two top-floor residences have additional living space provided by so-called “crystalline pavilions” –  a pair of zinc-framed structures that adorn the rooftop, along with patios, decking and greenery.

The rooms are low-slung and faceted to allow daylight to reach the neighbouring buildings, creating an interesting ceiling shape on the inside.

“[The project] places two jewel-like crystalline pavilions on the rooftop, opening up a series of unexpected views onto Londonʼs variegated and ever-changing roofs cape,” said DSDHA.

The cladding of the gem-like protrusions is scored, encouraging rainwater to drain off easily.

The building is broken up in to three parts, referencing the cluster of structures that once occupied the plot. The separate volumes are differentiated by their changing heights and brick colours.

The brick masonry walls are self-supporting, and feature deep recesses around the windows.

“The use of brickwork was also a strongly expressed desire for the client, who firmly believed that the building should acknowledge the predominant materiality of the surrounding terraced housing and to read clearly as a residential building,” the architects told Dezeen.

Rather than creating expansive shopfronts, the windows on the ground floor match the ones on the residential floors above. This more reserved appearance is better suited to the historical context, according to the architects.

“The project offered us the opportunity to explore how to insert an original but distinctly contemporary building into the historic streets,” they said.

“The design seeks to restore some key local features of typical Fitzrovian terraces, such as an emphasis on verticality where strong horizon lines mark a tripartite division of plinth-body-roof,” they explained.

On the lower residential floors, the windows are of a similar style and size to those of the surrounding buildings. On the uppermost floor, the openings are larger with unexpectedly angled panes, hinting at the less restrained roofscape behind.

The entrance to the shopfront is from the busy main road while the 11 residences above are reached from a quieter side street.

The apartments include two intended to be affordable housing. All of them are have windows on two or three sides, and lead out to a series of balconies and outdoor spaces.

“There is almost no precedent for this typology in London, as the prevalent attitude amongst agents is to support already tested models: cookie-cutter layouts with consistent ceiling heights,” said the studio. “Ingenuity is typically extinguished.”

The open-plan interiors are decorated with pale oak floors and neutral tones, and are brightly lit by the large windows.

Black metal stairs and door frames in the building mimic the bespoke iron railings used on the exterior.

DSDHA has previously designed a house for the two founders of the firm, which uses mirrors and underground rooms to hide its size. The studio has also converted a munitions warehouse into a light-filled studio and gallery for Edmund de Waal.