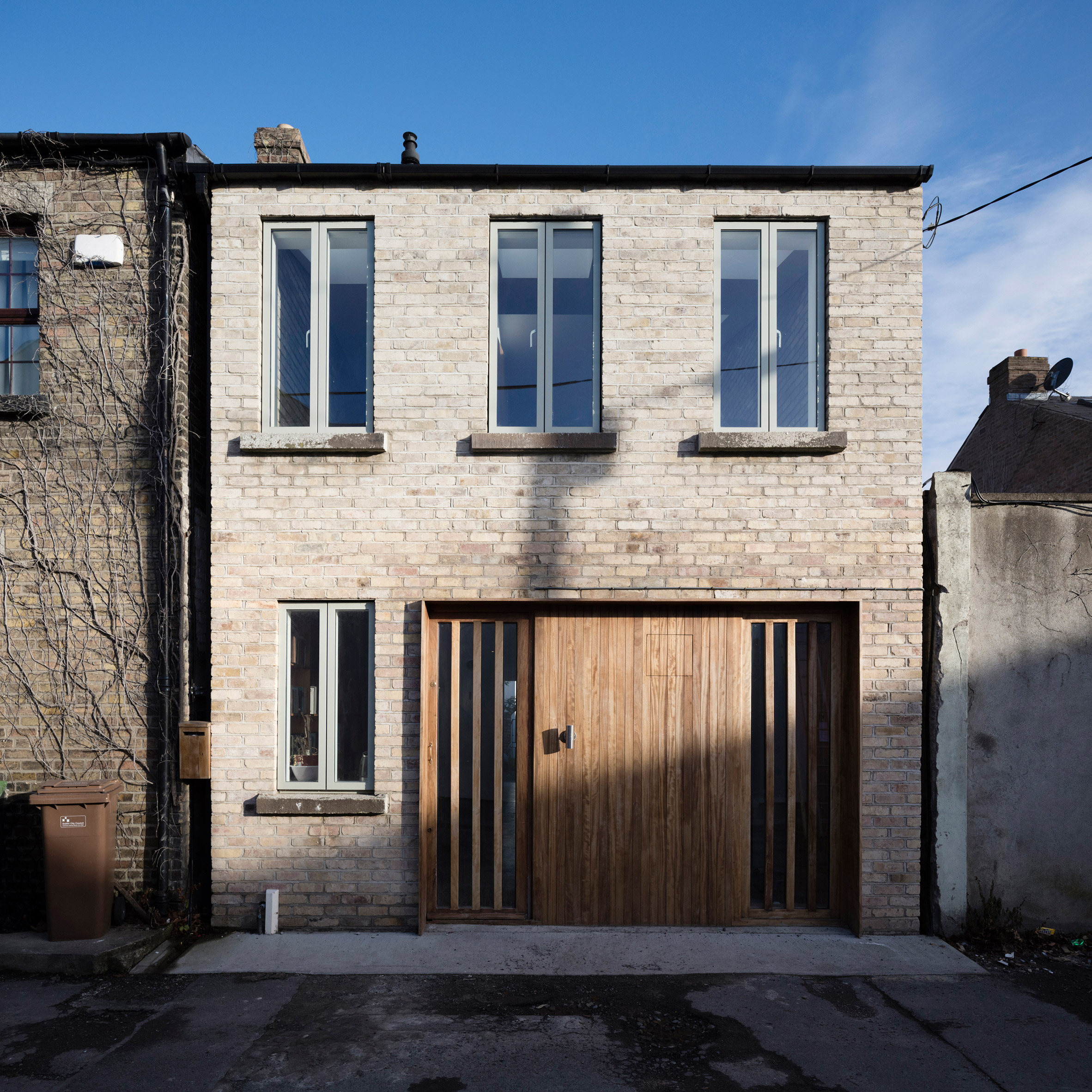 Local studio DUA, which stands for Design Urbanism Architecture, inherited the project for the traditional two-storey mews house after it has already been granted planning permission – but their client wasn’t happy with the design.

Instead, he wanted a more contemporary house, and tasked the architects to change the design of the property without altering the approved exteriors.

“The challenge was to redesign the mews house from the inside out without amending the planning application due to time constraints,” studio founder Darragh Breathnach told Dezeen. “This meant we could not modify the exterior proportions or window locations.”

So the studio flipped the proposed internal layout of the Cratlach Mews House, placing the open-plan kitchen, lounge and dining room on the first floor and the bedrooms at ground level.

The new arrangement allowed the architects to increase the amount of daylight entering the main living space and make the most of the roofspace.

The lounge area is set along an exposed wall made from reclaimed bricks, while the kitchen and dining room are placed on a lower level accessed by a few steps.

“By using subtle level changes we defined different zones within the building without the need to insert additional walls,” Breathnach explained.

Four skylights are placed in pairs above the kitchen area, which features a run of cabinets made from stainless steel on one side and another of Chilean pine plywood above.

A small desk and seat is  integrated into a wooden bookshelf that runs down one side of the main staircase. An opening between the tabletop and bench encourages the owner to dangle his feet over the stairwell while he reads.

This space-saving design is one of a series of custom-made wooden furnishings that the architect designed for the house. On the lower level, the walls are made with plywood panels that also form drawers and shelving for storage.

“In designing this house, we took a lot of inspiration from boats,” said the architect. “All the fitted furniture was custom made making use of every square inch of the space, sometimes in some unusual and quirky ways.”

The master bedroom on the ground floor features white-tiled steps that lead down to a lower level, where cabinets fitted into the wall create a small dressing room.

The sunken concrete bathtub is also placed here, alongside large windows that provide views of the garden while bathing.

Studio 304 also created a sunken bathroom for a house in London to allow residents to bathe in a garden setting.

A second bedroom on the ground floor features glass sliding doors that open to the garden. A shower, toilet and a long, thin concrete washbasin occupy the narrow space.

Along with the exposed brickwork walls and wooden fittings, the architects chose a simple material palette, including white-painted walls and concrete floors.

Other houses in Dublin include a seemingly windowless brick residence by ODOS Architects and a timber and glass residence home by John McLaughlin.

Photography is by Aisling McCoy.