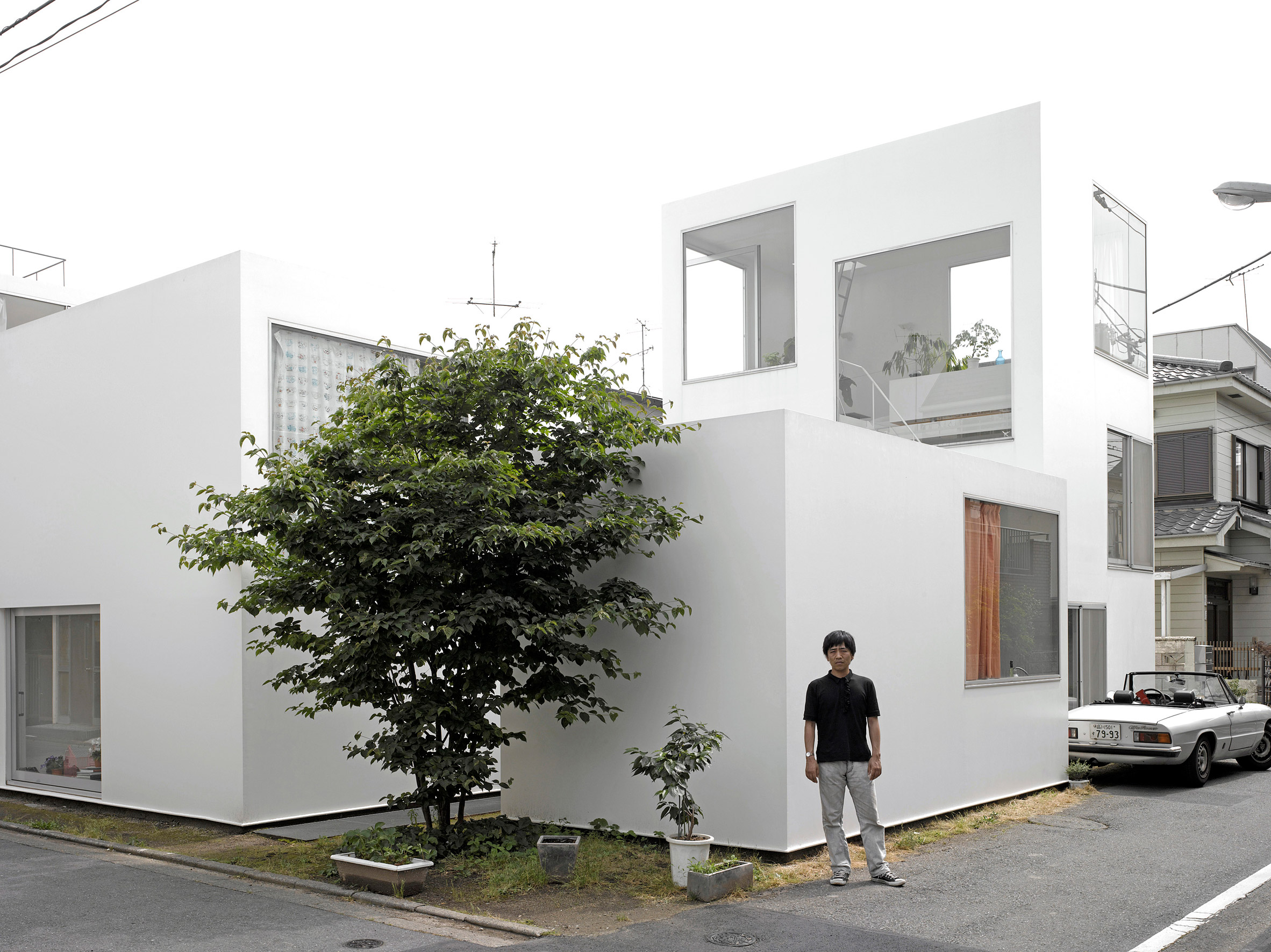 Photographer Edmund Sumner has revealed decade-old images of one of Ryue Nishizawa‘s most famous buildings, Moriyama House – a full-size model of which was recently installed inside London’s Barbican.

After visiting the Barbican’s “highly impressive” exhibition The Japanese House: Architecture and Life after 1945, which includes a full-size model of the Tokyo house, Sumner dug out his photographs from when the building was first completed in 2005.

Moriyama House is one of the last projects Sumner chose to shoot on film before transitioning to digital. Among the images are rare portraits of Ryue Nishizawa, who leads the Pritzker Prize-winning architectural firm SANAA with Kazuyo Sejima.

“I was surprised to see how gritty Moriyama House was the first time I visited it. It was far from glamorous, with the reality of tenants living in such small spaces,” said Sumner. “I wanted to be able to capture the very real, lived-in environment visually.”

“I was making a difficult transition between film and digital around that time,” he added.

“On both occasions, I was shooting under heavy summer skies so colours came out strangely and my post production wasn’t as advanced as it is now. No doubt, digital would have been a better platform for this project.”

Designed for a client named Yasuo Moriyama, the house comprises a group of more than 10 white boxes. They range between one and three storeys and are dispersed throughout a garden.

One box with two transparent and two opaque walls hosts a bathtub and sink, while a three-storey block sees three living spaces stacked one on top of the other. The client occupies several of the block himself, but rents the others out to tenants, who all share the garden.

Sumner visited the house twice in the mid 2000s, once in 2006 for a special Japan issue of The Architectural Review and again in 2007 when he collaborated with his wife architectural writer Yuki Sumner on a feature about Japanese architects for Swarovski’s Chrystalized Magazine.

“Around that time I was shooting in Japan on a regular basis, roughly twice a year. I was rarely the first photographer to cover these projects, but I was usually the first foreign photographer there,” Sumner told Dezeen.

“This was important. It made me conscious of giving a slightly different take. I was keen to avoid, for example, presenting them in pristine conditions, devoid of people, as they were in some of the Japanese magazines,” he added.

“For the second shoot, which came less than a year later, I decided to concentrate on details and capturing views into and between the units. I was interested in the colour – or lack of it – and how the owner, Moriyama, and his tenants’ possessions softened the hard space, helping me to understand the concept better.”

Sumner’s wife and eldest child feature in two of the photographs of Moriyama House, making use of the garden and roof-top terraces, while Nishizawa poses in front of the white blocks in others.

“I have shamelessly used my children and my Japanese wife Yuki as models on my shoots, not just in Japan but for shoots in many other places,” said Sumner.

“My children have come along to many of my shoots. This has been both a pleasure and a challenge. It was often purely out of necessity,” he continued.

“My collection has grown to such an extent that I have decided to create a hashtag on Instagram under #mykidsinarchitecture. One day I might do a book on them. I’m hoping to continue to include my children in my pictures, but now that they are older and there are sadly less opportunities to do so.”

Moriyama himself is missing from the shots, but the broad windows of the blocks give the voyeur a view into his living spaces, which are dressed with pot plants, stacks of books and CDs, and several of SANAA’s Nextmaruni chairs.

“I met Mr Moriyama on both occasions but, not speaking Japanese, I wasn’t able to engage with him as fully as I would have like to,” said Sumner. “At the risk of cliches, I’d describe him as being somewhere between a dude and an ‘architectural sage’.”

“My only regret is not having taken portrait of Mr Moriyama.”

Edmund Sumner is among the most sought-after architectural photographers in the UK.

He has a particular interest in the work of Japanese architects. Recent shoots showcase the fluted concrete structure of Toyo Ito’s Museo Internacional del Barroco in Mexico and Kenzo Tange’s 1960s St Mary’s Cathedral in Tokyo.