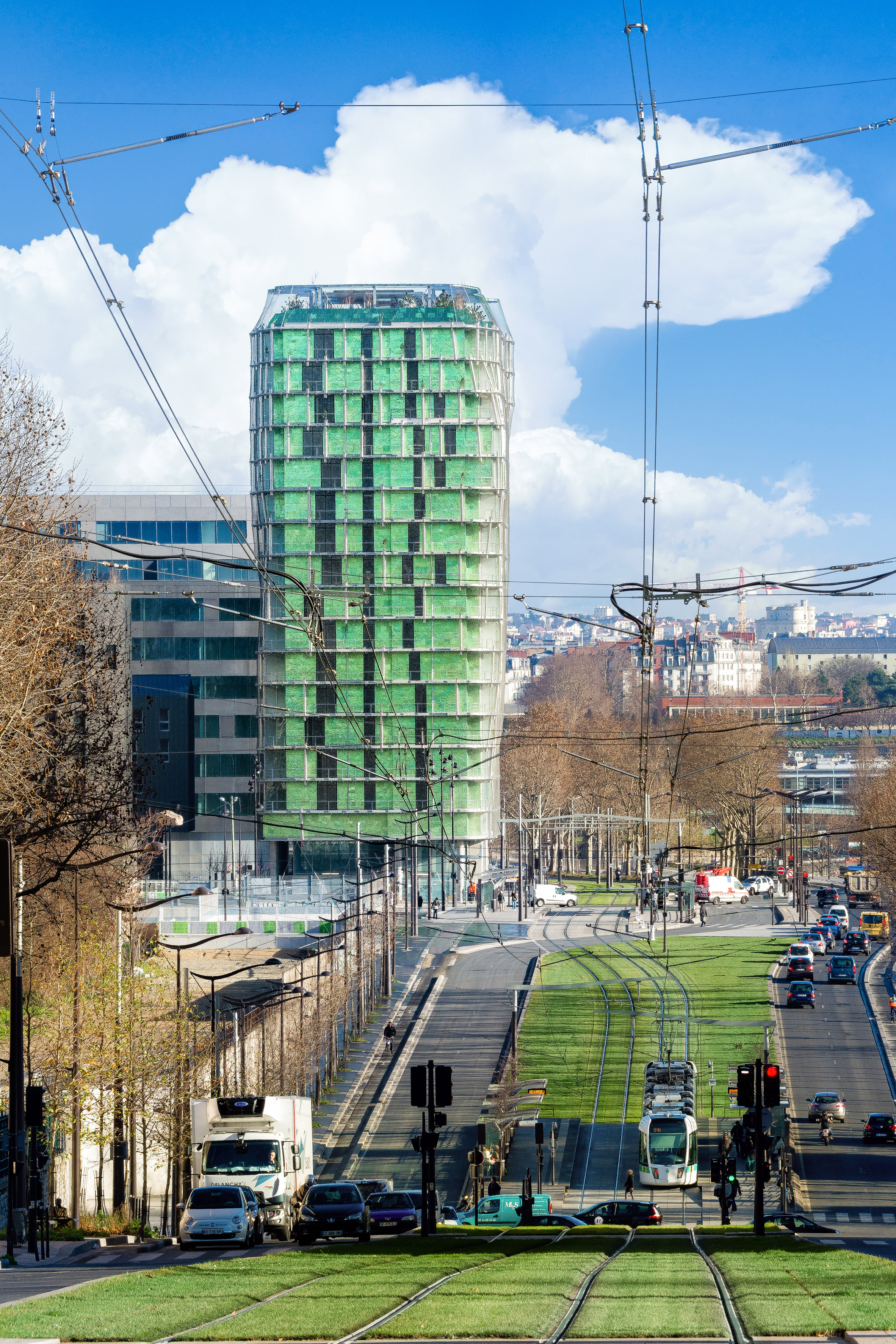 Plants grow up the exterior of this green apartment tower in Paris, France, which was designed by local firm Maison Edouard François to spread seeds across the city.

Maison Edouard François designed the M6B2 Tower of Biodiversity to show that high-rise structures can be used to create environmentally friendly cities with plenty of plant and animal life.

Benefitting from an exemption to the 37-metre height restriction in Paris, the team created a 50-metre-high building that towers above its neighbours at River Gauche, on the southern bank of the river Seine.

Continuing on from the studio’s previous explorations into plant-covered architecture, the team created a facade with a double skin for the 16-storey tower. The outer layer is made up of stainless steel netting that acts as a climbing frame for plants so that when the wind blows their seeds will be spread across the city.

“In France, ‘village’ urbanism seems to be adamantly resisting the vertical city, without truly considering its potential,” said the studio. “One of the objectives of our project is to quell these hesitations.”

“Covered with plants from wild natural areas, our tower is a tool for seeding: it allows the wind to spread class-one purebred seeds into the urban environment.”

The inner facade is covered in recyclable green titanium panels that shimmer when the sun hits it so that the tower becomes a beacon. Its green colouring is intended to be reminscent of moss.

“Its titanium cladding generates moiré patterns that give it a subtle, fluctuating character,” the studio explained. “The tower is thus not only a tool for neighbourhood development but also a tool for development on a bigger scale as it distills a green aura to the Parisian cityscape.”

The mesh extends up and over the roof of building covering a garden on top. Balconies between the two facades wrap the entire building to create a curved outline.

Concrete columns support the structure and raise it to create a double-height entrance. It is surrounded by glazing that allows for plenty of natural light, while a angular blue panel mounted on the ceiling reflects the interiors.

Inside the stairwells and hallways feature exposed concrete offset by colourful paintwork and lighting.

The tower forms part of a complex made up of three other smaller residential buildings, a nursery and a retail centre, with a public garden between. These are clad in darker metal facades, including panels and rounded shingles, and have roof gardens.

“These smaller buildings are simpler, with metal facades in zinc and aluminium,” said the architects. “They are placed at the corners of the block, allowing for the pedestrian to stroll through a calm, protected garden filled with low vegetation, as if outside of the city.”

The climbing vines are the first part of the architect’s environmental strategy for the project, which will see conifer and oak trees growing on the site in the next 20 years.

Edouard François founded his own architectural, urban planning, and design studio in 1998. It is renowned for architecture that incorporates plants, including the Eden Bion Parisian social housing development set in organice gardens and the Tour Végétale de Nantes.

Photography is by Pierre L’Excellent.