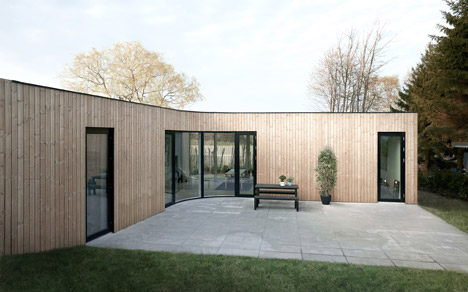 This timber-clad Copenhagen house was designed by local studio EFFEKT to be flexible for a growing family, but also to match the cost of the country’s cheapest kit homes (+ slideshow).

Named Villa One, the building was designed by EFFEKT for a developer who owned a vacant suburban plot on the outskirts of the city.

His brief was to create a house for first-time buyers that would match the cost but surpass the quality of other prefabricated structures.

“He was looking for a new approach to a private house for a young couple with or without kids,” architect Mikkel Bøgh told Dezeen.

“He felt the available options for starting families had become too standardised in order to make a quick profit, and he was looking to develop an alternative that would be flexible over the long term as the family grew.”

The 136-square-metre house has three wings that radiate out from an open-plan kitchen, living and dining space in the centre.

Two wings contain a bedroom and bathroom each, and the third wing has a sunken living space that can be converted into a third bedroom.

“It is meant to be a library or a TV room, but it can also be sectioned off if needed,” said Bøgh. “We also prepared the foundations of the garage to make the addition of a fourth room very easy.”

The team designed the house without corridors to maximise space inside. It is a tactic often used on low-cost housing designs, including another Copenhagen home by architect Sigurd Larsen and an earthquake-proof residence developed by Vietnamese architect Vo Trong Nghia.

Here, bathrooms and storage sit between the bedrooms and living area to provide buffer zones between the communal and private spaces.

The three-pronged design of Villa One is also intended to make best use of the outdoor space, which adjoins a noisy motorway at the back, but also enjoys views of the countryside beyond this.

“The rear garden could not be used for recreational activities because of the noise from the highway, so this shape creates a protected courtyard at the front, which is shielded from the noise and also has the best orientation for sun exposure,” Bøgh explained.

The curved facade at the back, which faces south and east, is glazed to bring in light, and creates views of the garden and the countryside beyond.

“The glass is the only expensive thing in the house, and the standard flat sections were not that much more expensive than building a solid wall,” said Bøgh. “In Denmark, labour is expensive, so having a single element that can be installed can actually save you money.”

The front facade, which faces south and encloses the main outdoor space, is clad in ThermoWood – a timber that is heat-treated to improve its durability.

“We wanted to create privacy on this facade, so people cannot look into the house from the street,” said Bøgh. “Also, when you sit on the terrace it’s nice to have your back against something that is not glass.”

A small outdoor space at the side, which the architects refer to as “a secret garden”, features a trellis for climbing plants to cover the house.

“The design left a small strip at the north, so to make this space feel bigger we decided to extend the garden up the side wall,” said Bøgh.

Construction for the timber-framed house was completed in six months, and cost 13,000 Danish krone (approximately £1,222) per square metre.

“Denmark and Norway are expensive countries to build in, so compared with other European countries that is probably costly, but it is the same price per square metre as the cheapest standardised houses on the market here,” said Bøgh, before adding that the studio now plans to develop more houses for similar budgets.

“We used conventional building techniques and materials in creative ways to come up with something different for the market,” he said. “Our brief was to prioritise and explore architecture creatively, while keeping the same price point of existing competitors.”

EFFEKT is led by partners Tue Hesselberg Foged and Sinus Lynge. Other projects by the firm include a cancer-care centre made up of seven house-shaped buildings and a street sports facility at an old train engine roundhouse.

Photography is by EFFEKT.

The post EFFEKT’s Villa One is a low-cost home designed to suit a growing family appeared first on Dezeen.