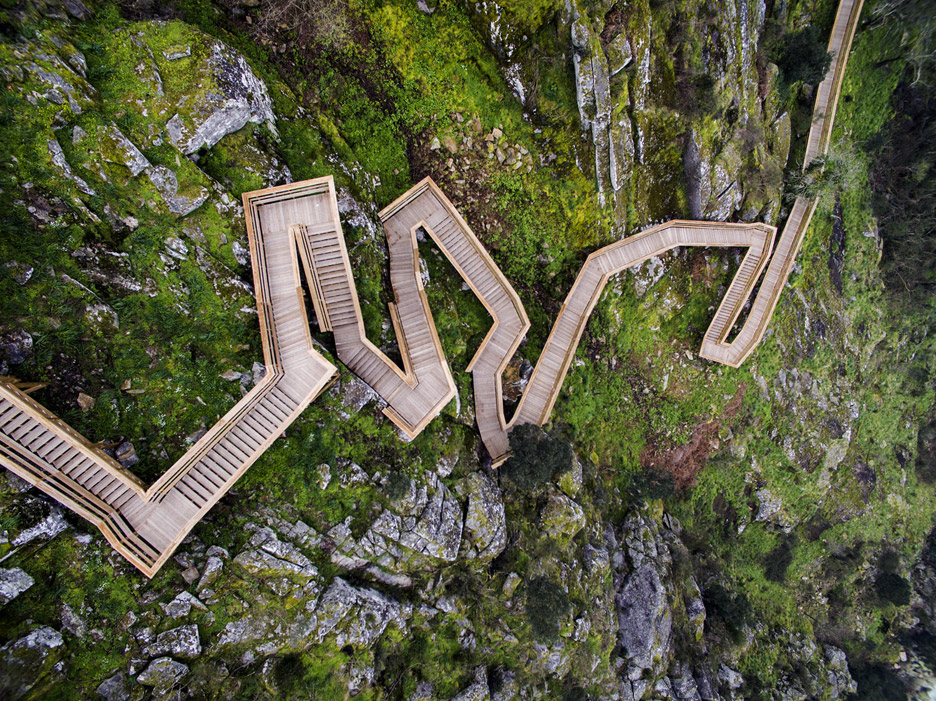 Portuguese photographer Nelson Garrido has used both a handheld and drone-mounted camera to capture the zigzagging paths of the Paiva Walkways, an eight-kilometre-long trail through the wild mountain landscape of Arouca, Portugal (+ slideshow).

Lisbon-based engineering firm Trimetrica was appointed by the local municipality to create the pedestrian route, which offers visitors a two and a half hour walk alongside rivers, forests, peaks, beaches and waterfalls.

The majority of the structure – the deck, handrails and much of the supporting framework – are all built from wood, helping it fit in with its natural setting. Metal elements were only added where necessary, as fixings in the wooden beams or to support a rope bridge suspended across the waters of the Rio Paiva.

The result is a seemingly simple structure that steps up hills, crosses waterways and weaves through woodland.

The trail originally opened in 2015, but had to be temporarily closed and repaired, following a mountain fire last year.

Architectural photographer Garrido visited just after the reopening in February 2016, even though no architect was involved in the process.

“More than a simple walk in contact with the nature, this is an unique experience deeply characterised by a dramatic landscape and an infrastructure that interferes as little as possible with the landscape,” he said.

“It is an unusual experience marked by winding stairs to the top of the hill with stunning sceneries, and a very narrow wooden bridge which spans across the river among cliffs and abundant vegetation.”

Garrido used a drone to capture the view from overhead. He claims this technique isn’t usually relevant in architectural photography, but seemed necessary in this instance.

“After being there one time photographing it in the normal way, on the ground, I decided to photograph it with a drone. I believed it would give incredible photos, and it did,” he told Dezeen.

“Drone photography is very popular nowadays, but I believe that we should use it only when it is justified, and this project is one that drone photography gives real dimension to,” he added.

Located on the outskirts of Porto, Arouca is a 328-square-kilometre nature reserve that heritage body UNESCO recognises as a geopark, which means it is of geological importance.

As well as being a source of quartz crystals, the area is home to a number of rare and endangered species, including the European otter, the Iberian wolf and the red squirrel.

Similar projects have been completed in other nature reserves around the world. A sinuous wooden walkway was recently built across the treetops of a botanical garden near Cape Town, while another pathway winds around the tree of a park in Estonia.