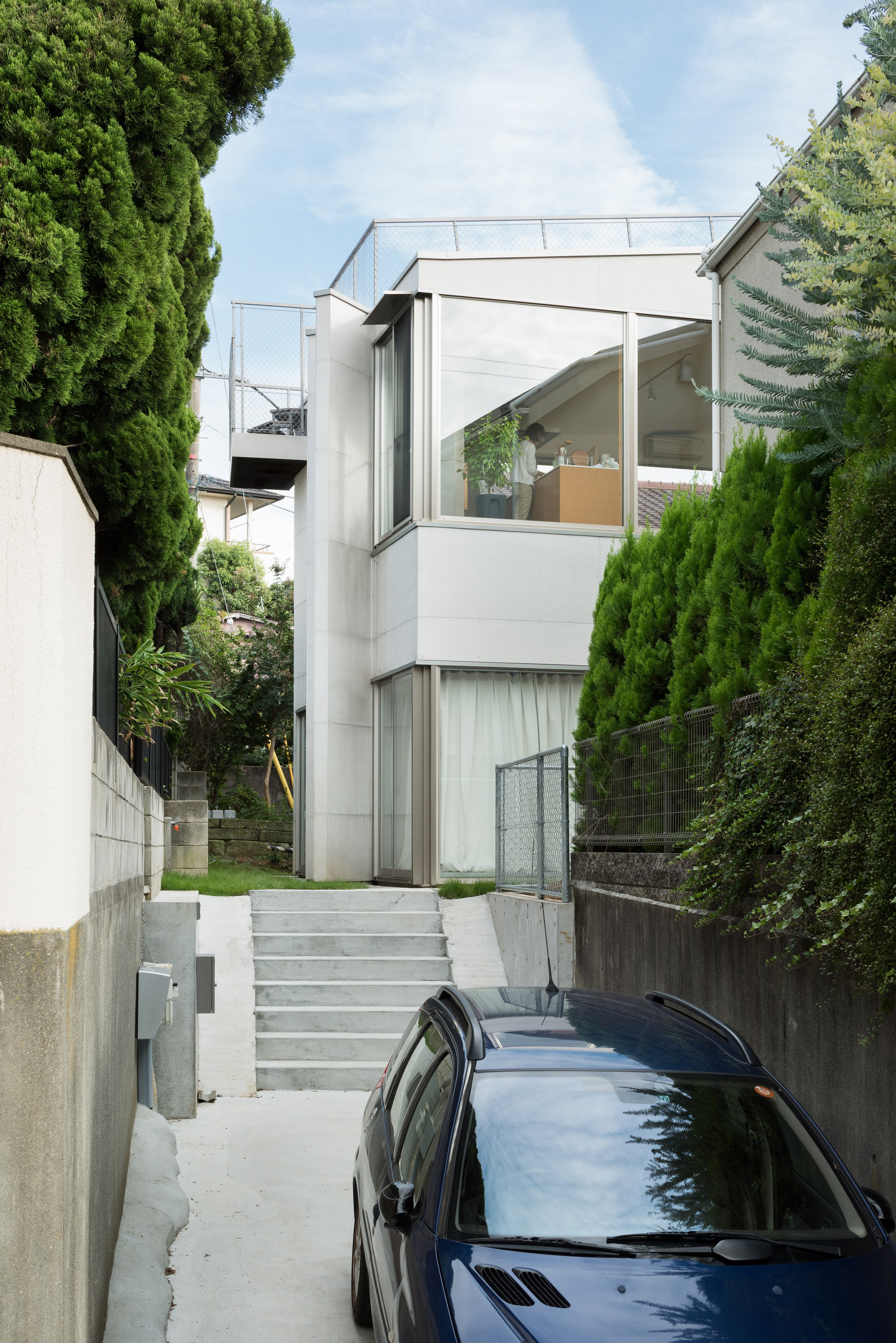 A roof terrace, balconies and an external staircase maximise outdoor space for this overlooked house in Tokyo designed by Japanese studio Front Office.

The Tokyo office designed the 120-square-metre Oyamadai House for a site in the city’s Setagaya neighbourhood, which is hemmed in on all sides by existing housing.

Rather than building walls to create privacy, the clients decided to take the opposite stance – instead requesting a home with open terraces and plenty of glazing.

“With a flag-shaped site, bound on every side by close neighbours, the understandable instinct might be to step away from the city, retreat behind walls where privacy is better assured,” said the architects.

“The family that purchased the site saw instead a chance to be as open as possible, using the small degree of isolation as an opportunity to connect to the metropolis from a slight remove.”

The two-storey house boasts a roof terrace accessed by an external staircase, as well as sliding glazing that opens into the garden.

“Being surrounded on all sides made the home a bit protected in a way rather than exposed,” architect Will Galloway told Dezeen, “and so we opened the facade as much as possible, treating the surroundings as a landscape that is worth opening up to.”

“The landscape on the ground floor is formed by an amorphous concrete surface that diffuses the transition from the city to the home, while on the upper floor landings and balconies extend the living space outwards.”

Two bedrooms with ensuite bathrooms are set at ground level, where they have access to the garden, while upstairs the kitchen and living/dining areas link with the roof terrace.

Huge windows on the upper floor are positioned to give the family views of the river valley over the roofs of their neighbours.

The space is loosely split into cooking and lounging areas by a stairwell enclosed by a sculptural, mesh-covered stairwell.

To achieve the large spans of glazing in the timber-framed building, the architects devised two cross-shaped buttresses.

“A small budget required that we built with wood, and as simply as possible,” explained the architects. “A wooden structure in a disaster prone area normally works against our ambitions, requiring substantial sheer walls or braces to resist earthquakes.”

“To answer this need large X-shaped walls are placed at either end of the home,” they added. Acting like flying buttresses, they push the structure outside the plan without interfering with the desire for openness.”

Photography is by Takumi Ota.